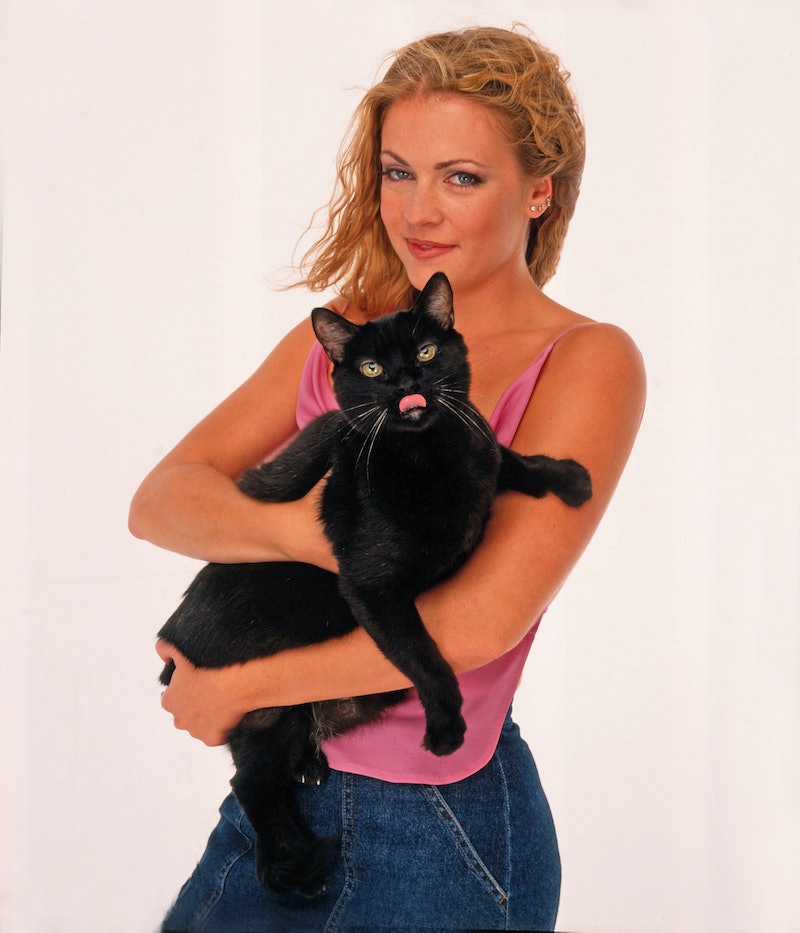 It's officially Halloween, which means there's no better time to bring back one of TV's favorite witches. On Wednesday night, Melissa Joan Hart reprised her role as Sabrina the Teenage Witch during a sketch on The Late Late Show with James Corden, but she underwent under a little re-branding, turning the iconic character into "Subpoena the Teenage Witch" with an unexpected courtroom power.

Corden recreated Sabrina's famous living room for the sketch, which featured Hart in character as her former teenage self. She even reunited with an old friend — Salem the Cat, voiced by Nick Bakay once again. In the skit, Sabrina tries to share a glass of wine with her sassy cat, but rather than conjuring up some Chardonnay as intended, she keeps getting court documents instead.

Enter Corden, who plays her cousin James teleporting in from Washington D.C. to explain her, uh, interesting new power. Sabrina (or now, Subpoena) has the ability to serve a subpoena to anyone and summon them to court, including people like Vice President Mike Pence, Secretary of Energy Rick Perry, and Donald Trump's lawyer Rudy Giuliani.

Once Corden explains that people are able to not respond to the requests, Sabrina realizes her new power is a dud. "A power people can just choose to ignore sounds like nothing," she said. And even Salem agrees. Corden tries to convince Sabrina that it's important, but eventually gives up — and finally gives her that glass of wine.

The sketch was quite a throwback and likely the closest thing to a Sabrina the Teenage Witch revival that fans will get, especially in the wake of Netflix's modern reboot Chilling Adventures of Sabrina. However, the original cast gave their blessings to the stars of the new reboot before the show's 2018 premiere, so all is well in the world of teenage witches.

Another classic Hart show could be returning at some point, though. In March 2018, the actor was reportedly in talks to reprise her breakout role of Clarissa Darling in a Nickelodeon revival of Clarissa Explains It All. However, Hart explained to Us Weekly in April 2019 that the reboot was "on hold" for now. "I don’t know what’s going on with it," she said. "It’s up to the writers in the show, and the producers, and then the network, what they would want." Although that's still up in the air, the more that Hart appears on our screens, the better — whether it's as Sabrina, Clarissa, or simply herself.