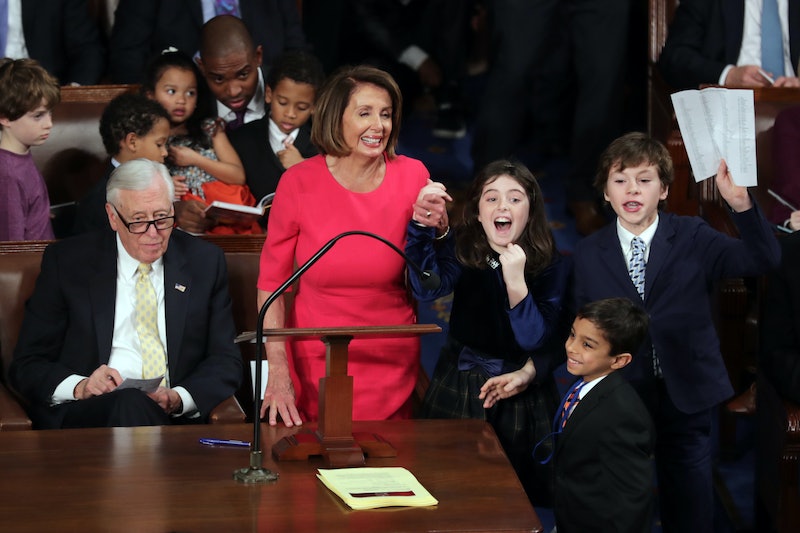 Newly-elected members of the 116th Congress were sworn in on Thursday, with many women and people of color making history as they officially took their places on Capitol Hill. Many members of the new Congress brought their kids to their swearing-in ceremonies, and the resulting photos and videos are filled with memorable moments.

In addition to swearing in freshman officials, members of Congress also elected California Rep. Nancy Pelosi to resume her role as speaker of the House. As Pelosi voted for herself, her grandkids — and especially her granddaughter — were at her side and extremely excited, cheering as other Congressional officials voted in favor of their grandmother. Video footage of the moment Pelosi cast her vote shows her granddaughter jumping up and down and holding her grandmother's hand.

And when Michigan Democrat Rashida Tlaib — who made history by becoming the first Palestinian-American women to be elected to Congress — cast her vote for Pelosi, her kids were dabbing as nearby lawmakers laughed. Pelosi and Tlaib were not the only Congressional officials who brought their children or grandchildren along on their first day of work, either. Numerous babies were spotted in the crowd during Thursday's swearing-in ceremonies, with photos and videos going viral on Twitter.

Now that Democrats have retaken control of the House, Pelosi will be serving as speaker for the second time. She received 220 votes, the Atlanta Journal-Constitution reported, while her Republican opponent — California Rep. Kevin McCarthy — received 192.

According to Variety, children and other family members were allowed on the House floor on this particular occasion. The kids accompanying Pelosi and Tlaib to the swearing-in ceremony were old enough to follow the proceedings, but Congressional officials were also holding babies in their arms as they cast their votes for their preferred House speaker candidate. For example, California Rep. Eric Swalwell had his newborn daughter with him, and could be seen gently bouncing her back and forth.

California Reps. Katie Porter and Raul Ruiz also had their kids with them on the House floor, per Variety. Ruiz reportedly held his twin daughters in his arms as he voted for Pelosi. However, some of the kids on the House floor were not completely interested in the proceedings, according to Agence France-Presse.

But when Pelosi took her oath of office at the podium, she invited all the kids present to join her. As she was officially sworn in as speaker of the House, Pelosi was surrounded by not only her own grandchildren, but also by the kids of numerous lawmakers.

According to HuffPost's Matt Fuller, Pelosi told the children that they could go back to their parents once she had taken their oath, to which one of her fellow lawmakers replied, "keep them!"

After all of the new members of the House are sworn in — including more women than ever before, according to Time — Democrats will regain their prior majority, and plan to get to work right away on issues like ending the ongoing government shutdown and passing a Medicare for All package.