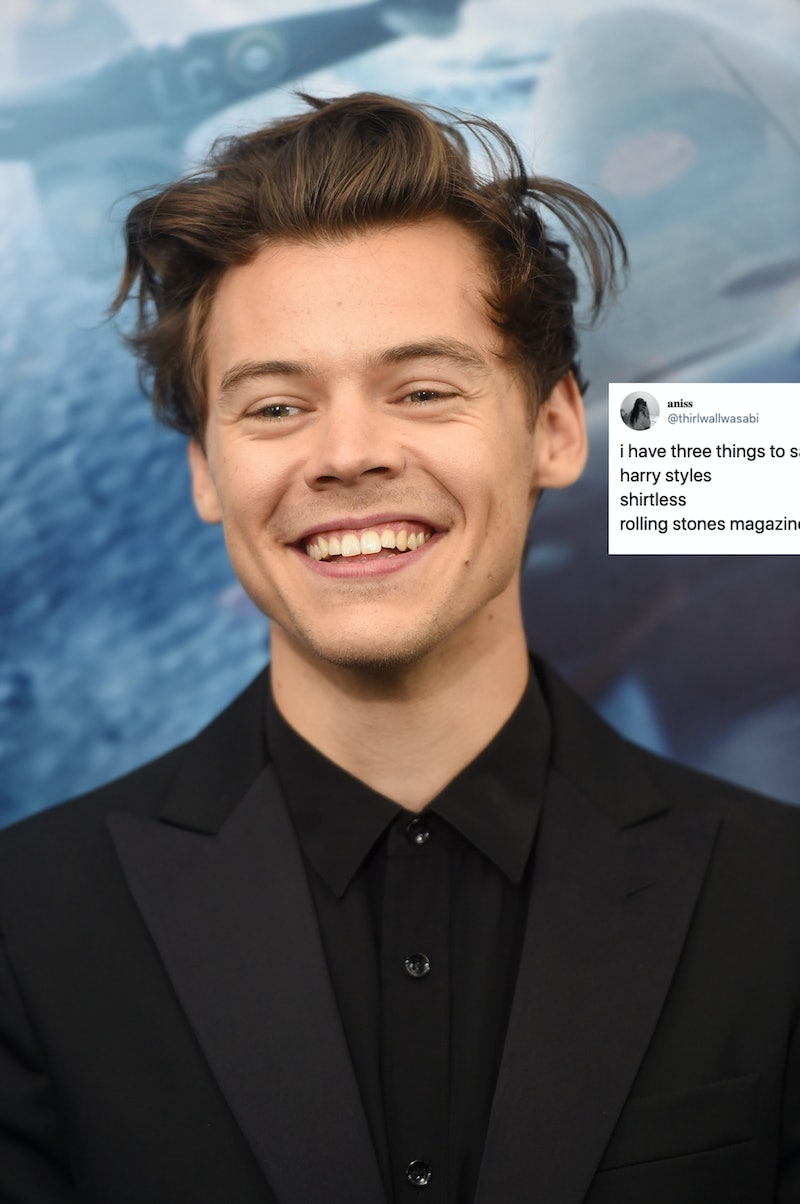 It's been more than two years since he released his debut solo album, and fans have long-been thirsting for more. Speaking of thirst, Harry Styles' new Rolling Stone cover dropped on Monday, Aug. 19, and the shirtless shot doesn't disappoint. The actual interview doesn't come out until September, but these memes and tweets about Styles' Rolling Stone cover should hold you over in the meantime.

So, if something seems a little off while you're browsing the web today, it's probably due to the fact that Styles' cover has basically broken the internet. In the pic, the 25-year-old singer appears sans-shirt, ruggedly unshaven, and is flashing his mega-watt grin above a tagline that reads, "Sex, Psychedelics and the Secrets of Stardom." It's ... a lot to handle. Phew, is it hot in here all of the sudden?

What's the occasion, though, you wonder? Well, according to a source for Us Weekly, Styles is due to release his second album "later this summer/early fall." Now, this hasn't been officially confirmed by anyone from his camp yet, but it'd make sense if true.

First of all, in March 2018, the singer debuted a new song called "Medicine" during a show in Basel, Switzerland, as per the Huffington Post. Then, in November of that year, Styles spoke to Timothée Chalamet for i-D magazine, and straight-up admitted that he was, in fact, working on a new album. "I'm making my second album right now," he told the actor, "so I'm going to do that [making the right choices], read a lot and see what happens."

Now, Styles has kept a relatively low profile over the last couple of years, and interviews with the star, in general, have been few and far between. That's what makes his conversation with Chalamet — and his soon-to-be published chat with Rolling Stone — such a big deal.

He wouldn't have mentioned new music back in November if he didn't want fans to know about it, right? And if he's got another interview coming out next month, it's safe to assume that he must have something of significance to discuss. Aside from "Sex, Psychedelics and the Secrets of Stardom," of course. Not that those won't be interesting topics to read about — because they definitely will be — but still.

Regardless, fans are pretty thrilled with the Rolling Stone cover alone right now. So thrilled, in fact, that the resulting memes and tweets about it are kind of taking over Twitter. Need proof? Just scroll through the best of the bunch below.