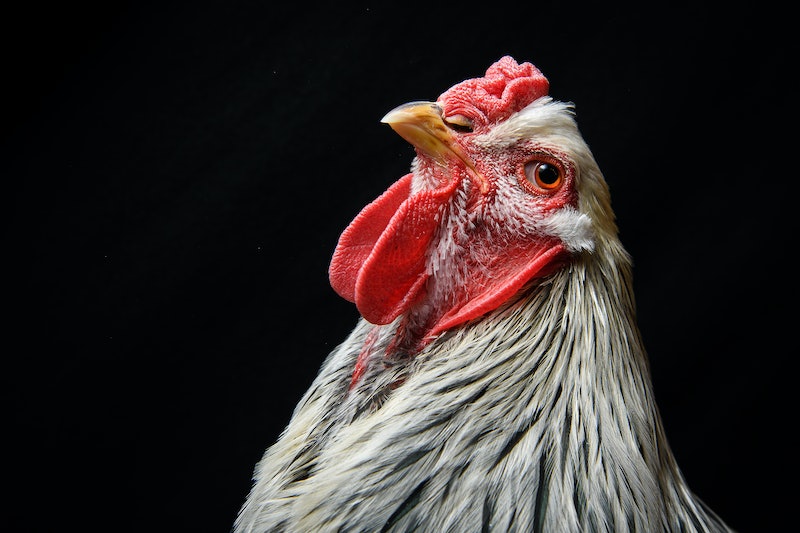 If you have internet access and an penchant for clicking animal videos — i.e., if you have a human pulse — you're probably familiar with the giant chicken. But what you might not already be familiar with are the hilarious and insane memes and tweets about that giant chicken video that's going viral. Yes, viral, this oversized chicken is taking the internet by storm, for a few reasons.

First of all, at first glance, it's terrifying, and for anyone who takes issue with the poultry industry, this footage reads like worrisome evidence that perhaps some company like McDonald's has created a new breed of monster chickens to satisfy their McChicken demands.

Second of all, many viewers just couldn't believe it. Without any reference for a chicken of that size and scale, people thought the video was fake. Perhaps another element of fake news set loose on the internet to show the people at home that they're too quick to believe whatever shows up in their newsfeed. I mean literally, head to your web browser and type in "giant" and "giant chicken" will autofill.

But the apparent reality of this giant chicken, is that it's just that. It's not some poor creature created by capitalist meat slingers, and it's not an apparent internet hoax bound to make us feel foolish. Rather, it's a Brahma chicken, a breed that can weigh up to 18 pounds. With large, fluffy feathers, this bird, originally imported from Shanghai, is characterized by its great size and appearance. Here it is, it all its glory:

So now everyone can relax, and just enjoy these memes and tweets while they last:

This chicken really left an impression on people.

There Are More Important Things...

This was all of us yesterday.

... to take a break from politics and the declining state of the country.

Is this next week's news story?

This person is most concerned about the chicken's large shoe size. Because chickens wear shoes, obviously.

Chicken: you're on your own.

... But it has no interest in finding you, tbh.

And The Tables Turn

This chicken is all: "I'll have a 10 piece McHuman, and extra dipping sauce."

The Chicken That's Made Us Chicken

Don't feel bad; we all did.

Just In Time For March Madness

A chicken that could literally dunk. Like, not in sauce — in a basketball net.

How It All Ends?

But no need to worry folks; it's not a killer chicken, just a fluffy one.