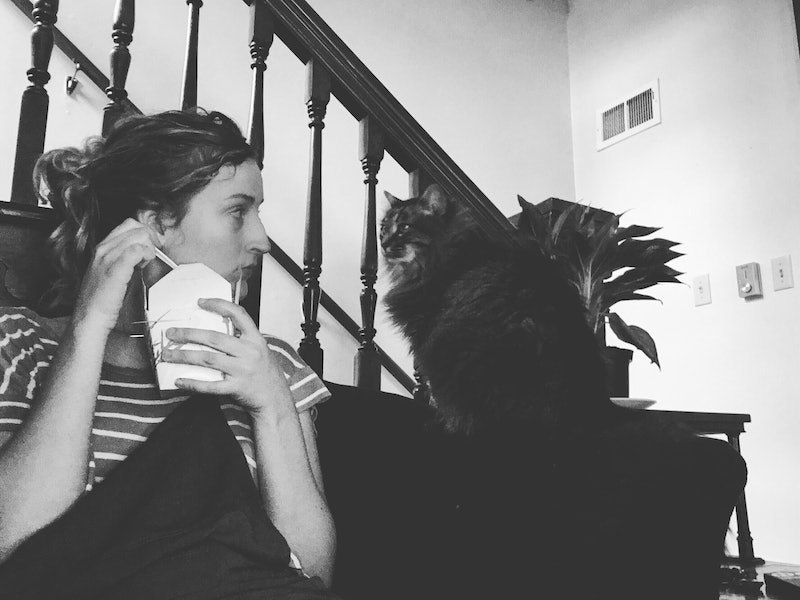 For as long as I can remember, animals have been a big part of my life. When I was growing up, there was never a time when cats, dogs, fish, and various bird species weren't hanging out on my parent's property. On my ninth birthday, I asked for pet rabbits and was gifted two. (By winter, I was bundling up morning and night to care for a whole rabbit family.) Any time I went hiking, either my dog or my neighbor's would always accompany me. Animals have always been good for my health, but I'm just beginning to understand why: Animals ease my anxiety — which is why I finally decided to stop eating all of them two months ago.

Of course, understanding the way animals have helped my anxiety isn't the only reason I've recently stopped eating meat. The fact is, more than half of the Earth's greenhouse-gas emissions are the direct result of animal agriculture. Further, the link between animal rights and women's rights is compelling, and meat is bad for you. But mostly, it just stopped making sense to me to eat some animals and not others, because all animals (except maybe bedbugs) have made it easier for me to live with my anxiety.

Of course, I know meat isn't the only problem with animal agriculture. A huge amount of suffering goes into dairy and eggs, and while I haven't totally given them up yet, I'm slowly switching to almond milk, and I only eat eggs from chickens that live healthy lives on my parents' property.

I certainly can't justify eating meat anymore, though, because animals ease my anxiety simply by existing. Here are just a few ways I've realized this in the past year.

No Matter Where I Am, Animals Have Always Helped Me Stay Grounded

Over the past year, I've gotten to travel quite a bit. I spent last winter in New York City (it was very cold), last August in Southeast Asia (it was hot AF), and I've hung out in Missouri in-between those adventures (the weather changes all the friggin' time). It's been interesting, but changing my address three times in one year has been unsettling. As much as I love seeing new places, the uncertainty that naturally accompanies travel can be anxiety-inducing for me.

Throughout this wild year, animals have remained a constant source of strength for me. When I was lonely (and freezing) in NYC, I would see people out walking their dogs and instantly feel my spirits lift. While I was nannying my three little cousins in the Bhutanese jungle, interacting with Bhutan's many stray dogs and pet cows helped me stay grounded when I was feeling overwhelmed. And regardless of what I've experienced here in Missouri, (like a recent breakup) hanging out with my two cats always gives me peace and leaves me feeling capable. Keeping those two animals safe and happy is adorable and fun. More importantly, though, consistently meeting their needs reassures me that I have what it takes to meet my own.

Until this year, my life has always been pretty stable. I lived in the same house from preschool until I left for college. Then I lived in my college town for five years. This year, however, has been full of uncertainty. It's been weird, but it's also forced me to realize that interacting with animals centers me no matter where I am. Now that I finally understand this, there's just no way I can keep eating animals. I'm too indebted to them.

Whenever Pets Aren't A Part Of My Life, My Anxiety Becomes Hard To Manage

Literally the only time I've ever lived without at least one pet was during the six months I lived in Brooklyn. I didn't want to leave my cat with my parents, but it seemed like the better choice for both of us. He'd been with me for about six years at that point, so I definitely felt uneasy about the whole thing — but I wasn't sure how long my NYC adventure would last. Knowing that, it didn't make sense to put my cat through the stress of moving over 1,000 miles away just so he could live in a tiny apartment with crappy window views.

Being without Smuggz for six months didn't do my mental health any favors, though. I know now that having him around would have helped me feel safer and less alone. Taking care of him probably would have been an excellent distraction from my anxious thoughts, too. (Which can be overpowering at the best of times, and led to more than one panic attack when I was in NYC.) Now that I've personally experienced what research tells us about the mental health benefits of having pets, I'll never live without a pet again. Here in MO, I have two cats. (Smuggz and Madeline, both of whom found me, btw.) And I've already decided that I'm adopting a puppy when I move to a new city.

The past year has helped me understand a lot of things about my mental health, and one of those things is just how dramatically living with pets improves my quality of life. I've realized that my pets (and the pets of others) help keep me well, so eating any animals would seem incredibly unfair to me now, especially when my pets would be considered food in other cultures.

When My Anxiety Becomes Isolating, Animals Are Always There For Me

Even when I'm not feeling socially anxious, my anxiety can make it difficult for me to be around people sometimes. This can happen when I'm physically and/or emotionally exhausted. It can happen when I'm worried about work or other grown-up things. It can also happen when I'm overstimulated and just need a few minutes alone to recharge. Most often, however, I'll start feeling super anxious for no apparent reason.

If I start to feel this way at home, playing with my cats almost always calms me down. If I start to feel this way while I'm hanging out at my friends' homes, taking their dogs for a 15 minute walk around the neighborhood literally rescues me. Instead of having to bail on my friends, I just take an anxiety-reducing stroll with their adorable, non-judgmental pups. Afterward, I'm usually able to re-join the festivities. (At least for awhile.)

I've honestly lost count of how many gatherings I didn't have to leave because one of my loved ones gave me the space and permission to take their dog for a walk, but I'm grateful for all of them. And because I'm grateful for all animals, I've decided to stop eating some, while loving others.

I owe a great debt to all the animals I've met at parties. Though social anxiety isn't always an issue for me, it often can be when I'm surrounded by new people and unfamiliar settings. Since "new people and unfamiliar settings" perfectly describes a solid chunk my 2016, I learned a lot about how to cope with social anxiety this year. Aside from a fully-charged phone and the right walking shoes, other people's pets have helped me cope more than anything.

The fact is, animals do a lot for me without even being asked. I rely heavily on animals to help me feel safe and accepted, so I can't keep eating some of them and not others. It's just that simple.