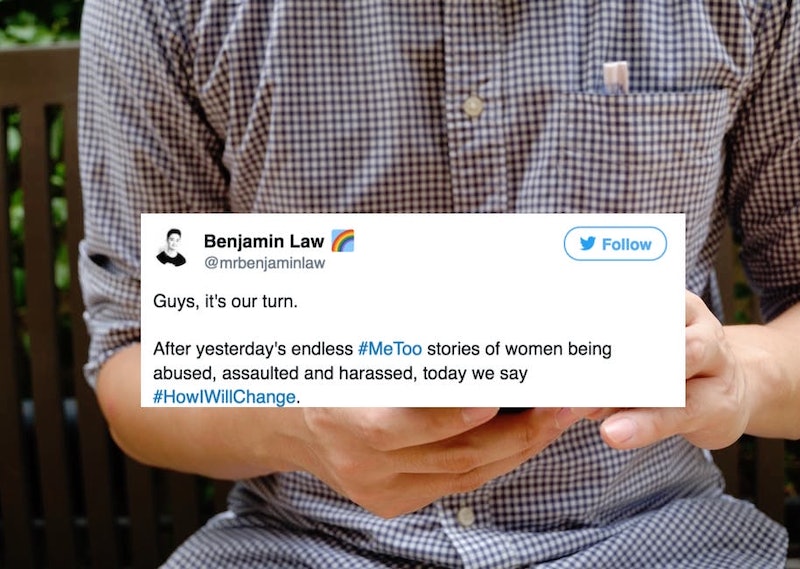 If you logged on to social media at all over the weekend, you're probably familiar with #MeToo, the viral hashtag illustrating the magnitude of sexual harassment and assault in everyday life. Since it began, thousands of women have used #MeToo to share their experiences with sexual misconduct, and now, some men are starting to put in their two cents as well. Normally, that would be a reader's cue to roll their eyes so hard they strain a muscle, but in this case, hold your scorn until the end of the paragraph. In response to #MeToo, men are posting "how I will change" tweets to demonstrate their intention to be better allies.

#MeToo can be traced back to actress Alyssa Milano, who tweeted a note on Sunday. “Suggested by a friend: 'If all the women who have been sexually harassed or assaulted wrote "Me too" as a status, we might give people a sense of the magnitude of the problem,'" read the note. In the caption, Milano instructed her followers who have been sexually assaulted or harassed to reply to the tweet.

That was on Sunday. Thousands of tweets, Facebook statuses, and Instagram posts later, it's safe to say #MeToo achieved what it set out to do.

But the story doesn't end there. For every tale of a woman being abused, there is an abuser — and statistically, that abuser is probably a man. On Monday, journalist Benjamin Law decided that it was time men recognized and took responsibility for their role in perpetuating rape culture. "Guys, it's our turn," he tweeted. "After yesterday's endless #MeToo stories of women being abused, assaulted and harassed, today we say #HowIWillChange."

He went on to give several examples, from donating to a women's shelter to recognizing that it's possible to be a "bad guy" without having assaulted anyone. Sometimes, silence is complicity.

It didn't take long for men to respond with their own promises to change for the better. Many admitted that in the past, they had stood by and watched others harass women, but they vowed to step in and do something next time.

One perceptive user wrote that "this women's issue is a men's problem," and it's up to men to recognize and challenge the way the patriarchy shapes their behavior.

One of the reasons #MeToo has been so effective is that it's a visual illustration of rape culture, forcing viewers to acknowledge the sheer number of women who have been hurt. Unfortunately, women are often dismissed or silenced when they speak up for themselves (please see: the backlash when any powerful man is accused of assault), which is why some users promised to be better listeners in the future.

Of course, more than a few Twitter users took the opportunity to state that they are already perfect beings who don't need to make any changes. Meanwhile, many women expressed appreciation for those men who said they would change. Trust me: Scrolling through #HowIWillChange on Twitter is an emotional rollercoaster.

Although #MeToo went viral not long after Hollywood producer Harvey Weinsten was expelled from the Academy of Motion Picture Arts and Scientists, Wellesley professor Leigh Gilmore pointed out to NPR that the hashtag wound up being more about "refuting a toxic culture of violence" than a specific person.

"I hope we don't miss our chance to really make some kind of transformation in daily life about sexual abuse and sexual harassment by simply scapegoating one powerful man," Gilmore told NPR.

In the end, people of all genders are influenced by the patriarchy, and it takes time to unlearn misogynistic behaviors. While abusers and harassers deserve to be called out, true change will only come when everyone makes an effort to do better. But judging from the popularity of #HowIWillChange, that might be achievable after all.