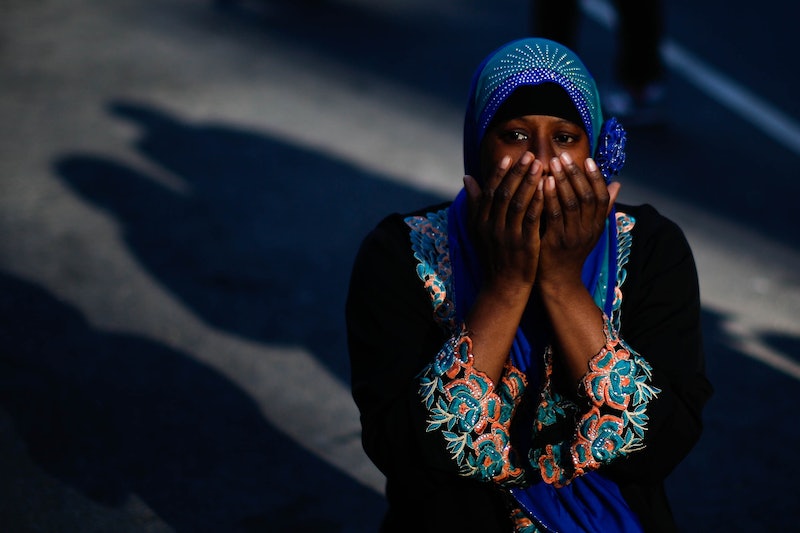 Remember that soaring feeling that you occasionally let take over you back before the 2016 election, when you trusted the polls and believed that a woman would finally become president? And then remember how it came crashing down, never to be felt again? Now, just over 100 days into Trump's administration, it turns out that for some reason, men are way more confident in America's future than women. According to the latest study from Pew Research Center, there's a definitely partisan divide in terms of how confident people are in the future of the country — but that's to be expected. The gender confidence gap that reveals itself across both parties is far more striking.

The study did not delve into why women are so much less confident than men in the direction that America is going — but really, it feels pretty clear that that crashing feeling on the night of Nov. 8 had something to do with it.

Now, when you look at the graph from a partisan viewpoint, it makes some sense that Republicans are now more confident under a Republican president, and Democrats are less confident now that Obama's off surfing in the Caribbean. However, women's confidence has fallen 14 percent overall, and there is no shortage of factors that could possibly explain the drop.

For one, there's the lack of women in positions of power, and Trump's overwhelmingly male (and white) cabinet. There's the fact that probably the most powerful woman in Washington got there because she happens to be the president's daughter. There's also the fact that the first female candidate for president with an actual chance to win got the support of the majority of America but still didn't win the presidency. And then there's the president himself, a man who bragged about sexual assault, who dozens of women accused of having sexually harassed them (charges which he has, of course, flatly denied), who has spent the first months of his presidency attacking women's rights, who has supported a health care bill that's so absurdly anti-feminist that it's no wonder that all women seem to be righteously up in arms about it. Need I go on?

Basically, Donald Trump has simply not created a welcoming, encouraging space for women so far, and he's not showing any signs of changing. So, is it any surprise that men — particularly Republican men, where he found the most support — would be more confident about the country's future? To put a positive spin on things, let's at least hope that this current lack of confidence will turn into an upsurge in voting in the midterms. Because really, that's the surest path to making things change.

More like this
Manchester Arena Attack 5 Year Anniversary
By Ella Glover
Michigan’s Governor Is “Going To Fight Like Hell” To Protect Abortion Access
By Andrea Zelinski
How To Fight For Reproductive Rights, Based On How Much Time You Have
By Courtney Young
This TikToker Has Genius Advice For Boosting Your Dating Confidence
By Lexi Inks
Get Even More From Bustle — Sign Up For The Newsletter