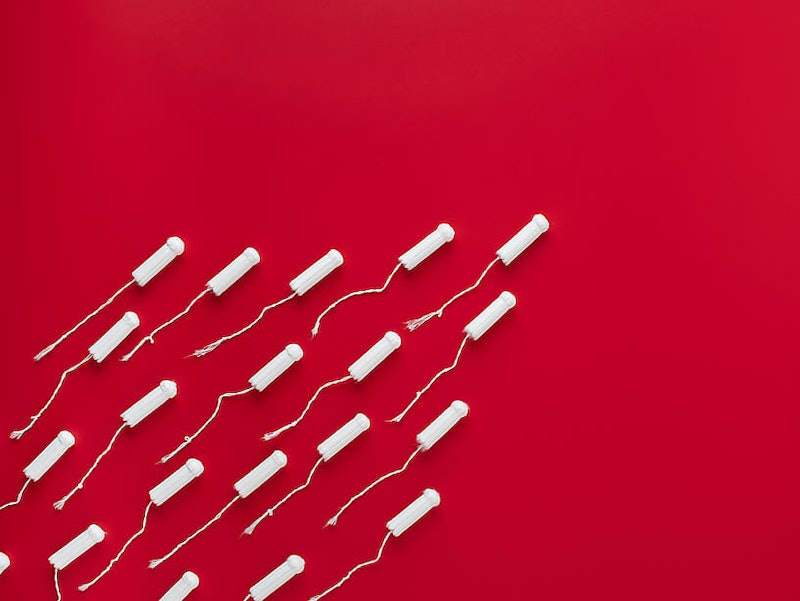 How did you learn about periods? Did one of your parents sit you down for a chat or was it during a very brief segment of school sex education that a teacher informed you of what was to come? I remember very little about my own period education mainly because I wasn’t told a great deal. However, this is hopefully all about to change, as menstrual health and consent will be taught in schools in England by 2020.

New changes to the way that schools teach health and sex education to primary and secondary children will introduce LGBT-inclusive lessons on sex, health, and relationships from a younger age. But fear not, as safe sex is staying firmly on the curriculum, students will still have to spend an hour trying to get a condom on a phallic appendage — my school's favourite being a banana.

My own education around menstruation left me feeling prepared to deal with my periods when they came (tampons at the ready) but completely in the dark about the side effects, and what to do when something isn’t right. For example, the condition endometriosis affects around one in 10 women in the UK and can be characterised by painful and heavy periods.

At the moment schools in England aren’t obliged to inform students about menstrual health conditions like this despite the frequency with which they occur. However, with a change to the sex and health curriculum this should hopefully improve things.

Sex education became compulsory in England in 2017. And the new changes will take the process into its next stages. As well as being taught about safe sex and pregnancy, secondary school students may be taught about female genital mutilation, domestic violence, consent, and period health.

The charity Endometriosis UK has been running a petition to introduce period health into the school curriculum under the strap line “stop treating periods like a dirty secret.” And that's what having your period so often felt like growing up, a dirty secret to be concealed. And running to the bathroom with a tampon hidden up my sleeve is something I have taken through to adulthood. If period health education, as well as more advice on consent, FGM, abuse, and mental health makes young people feel more empowered and in charge of their bodies then surely an update to the sex and health education is a good thing.

And, to add to changes around menstrual and sexual health in the curriculum, primary school children will also now be taught about self-care and mental wellbeing, online safety, how to treat others online, and what to do if a stranger contacts them. Period health will also be introduced to students at a younger age.

Mental health is high on the agenda in the secondary school curriculum too. Students will learn how substances can affect your mental health and how to spot certain conditions and ask for help.

Speaking about the changes in the curriculum education secretary Damian Hinds told the BBC, “growing up and adolescence are hard enough, but the internet and social media add new pressures that just weren’t there even one generation ago.”

"It will help children learn how to look after themselves, physically and mentally, and the importance of getting away from the screen and the headphones. And it can help young people be resilient as they chart a course through an ever more complex world."

The NSPCC has welcomed these changes with Almudena Lara, their head of policy, telling the BBC, "the NSPCC firmly believes that every child should be taught from an early age about consent, different relationships, and what abuse and harassment is, so that they learn they have the right to be treated with dignity and respect.”

While many have seen these changes as positive they have come up against some opposition. A petition which argues for the right of parents to opt their children out of relationship and sex classes has attracted 106,000 signatures. The government will debate this on Feb. 25.

They say knowledge is power. Learning about safe sex and physical changes to your body is incredibly important, but so are normalising what children and teenagers go through and letting them know who to turn to if there is an issue.

Mental health, be it positive or negative, affects us all. Equipping students with information about period health is key and not telling them about consent isn’t going to stop them having sex. As far as I'm concerned, these changes can't get here fast enough.