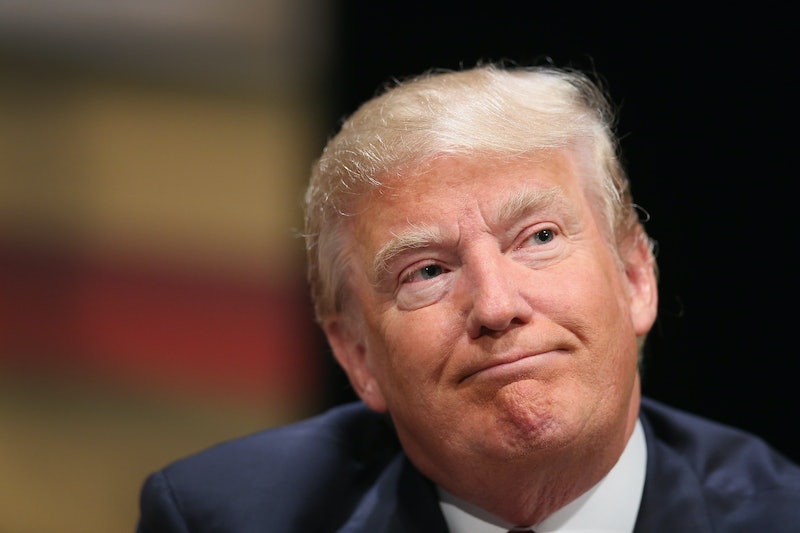 Learning words, expressions, and their etymological roots is fun. Learning can also be humbling — especially when you think you know something but you clearly do not. A similar exercise in humility unfolded itself when Merriam-Webster schooled Donald Trump on "prime the pump," an expression Trump claimed that he invented.

In an interview with The Economist, Trump told several editors of the magazine that he "came up" with the expression a "few days ago." Except there's a teeny tiny note to be made here: "Priming the pump" did not come into origin "a few days ago," but has been in use since 1933. It roughly means an increase in government expenses to boost economic activity. It's even older than Trump, who was born in 1946. This important correction came from Merriam-Webster, the publishing company that has been gently correcting Trump and some of his high-ranking aides on various occasions.

It's not the first time Merriam-Webster stepped in to coolly point out an error coming from Trump's side. In February, the dictionary company indirectly tweeted at Kellyanne Conway after she made comments on feminism at the Conservative Political Action Conference. Conway said, "It’s difficult for me to call myself a feminist in a classic sense because it seems to be very anti-male, and it certainly is very pro-abortion, and I’m neither anti-male or pro-abortion." Merriam-Webster's response? A tweet that gave a basic, easy-to-understand definition of feminism: "the belief that men and women should have equal rights and opportunities." Oh, and the dictionary also indirectly corrected Conway on the meaning of the word "fact" after the "alternative facts" debacle.

If there's one word to describe Merriam-Webster's method of correction, it's "subtle." Or maybe two words, "delectably ingenious." The dictionary has a rather frosty relationship with Trump but it never forgets to be classy in delivering its corrections. This time the covert direction for Trump was simply stated in a pithy tweet, "Look it up."

Trump's exchange with The Economist was bewildering to many. He has already made unsubstantiated claims before — such as accusing Barack Obama of wiretapping communications in Trump Tower — so such a self-aggrandizing claim in front of editors who specialize in economics is a routinely Trumpian thing to do: not knowing what you're talking about and taking credit for something you didn't do.

So, while the correction from Merriam-Webster may seem like a purely vocabulary-centric issue revealing a lack of etymological knowledge, it points to a bigger problem nestled in Trump's character: his lack of self-reflection. Maybe he really should pay heed to Merriam-Webster's advice and look up the word "introspection." It might help.