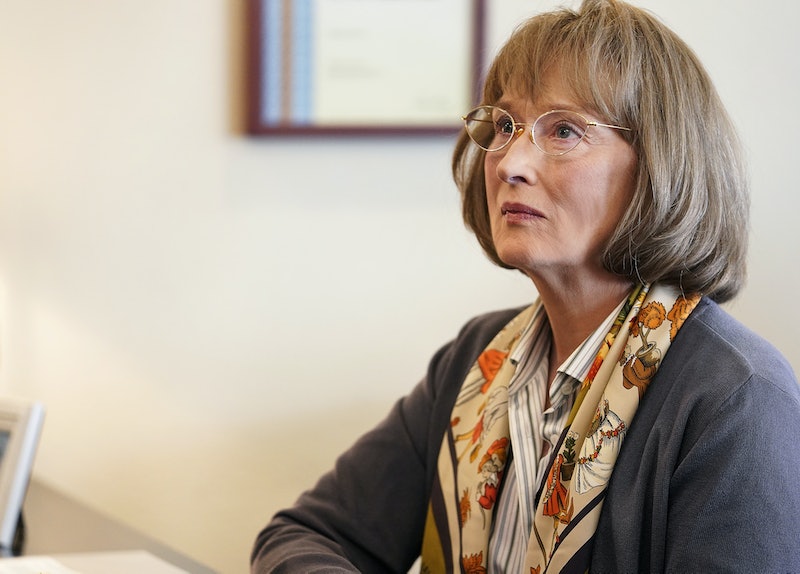 And with one electrifying scream, our new favorite Big Little Lies character was born. Yes, Meryl Streep made her debut in the Season 2 premiere and let out a scream that was nothing short of everything you've ever needed. But one thing viewers may not have noticed on first watch is that Streep's Big Little Lies character name is the exact same as her name in real life.

On the hit HBO series, Streep plays Mary Louise Wright, the grief-stricken yet somehow completely on-point mother of Perry (Alexander Skarsgård). In the Season 1 finale, Perry dies, in part, because of the Monterey Five, which includes Madeline (Reese Witherspoon), Renata (Laura Dern), Jane (Shailene Woodley), Bonnie (Zoë Kravitz) and his own wife Celeste (Nicole Kidman), who faced years of abuse at his hands. Mary Louise returns hellbent on uncovering what led to her son's suspicious death.

Streep naturally made a splash in her BLL debut, losing herself in another stunning performance. But the Oscar-winning actor actually shares one striking similarity with her character. Streep herself was born Mary Louise Streep, which is the same first name as her BLL role. In the midst of a show built on the foundation of secrets and lies, is there something worth reading into here?

The moniker connection may have a fairly obvious source. Big Little Lies author and producer Liane Moriarty told ET at the Season 2 premiere in New York that the character was "absolutely" written with Streep in mind. Moriarty also opened up about the thought process behind using the actor's real name.

"That's why she's called Mary Louise," Moriarty revealed. "In fact, in the beginning, I was calling her Meryl. Then I thought, 'No, that's too obvious. I'll find out her middle name.' And then Wikipedia told me that her real name is Mary Louise and [that name] actually worked perfectly for the character."

However, this art-imitating-life move could have even older origins. In 2015, Streep appeared on The Graham Norton Show and talked about how "Mary Louise" came to be. It turns out that Mary was a family name (Streep even gave it to her first daughter), and Louise was the name of Streep's mother's best friend. When her father began calling her Meryl, the actor said she, "Hated it. I wanted to be named Patty or Kathy." (Can you imagine?) Streep made this confession while her co-star Kidman was a guest on the same couch.

To wander even further down this rabbit hole, rumors swirled in January 2018, the very same week as her BLL casting was announced, that Streep wanted to trademark her name. TMZ even reported at the time that the performer filed an application with the U.S. Patent and Trademark Office for patented rights to the name Meryl Streep. Perhaps sharing a birth name with her new character inspired the move? We'll file this conspiracy theory under scream-worthy developments.

It's likely that countless roles have been crafted with Streep in mind, so it's interesting that no writer has used the actor's birth name before. Perhaps channeling a character with the same name as Streep will bring a whole new depth to her performance. (As if she needed it.)