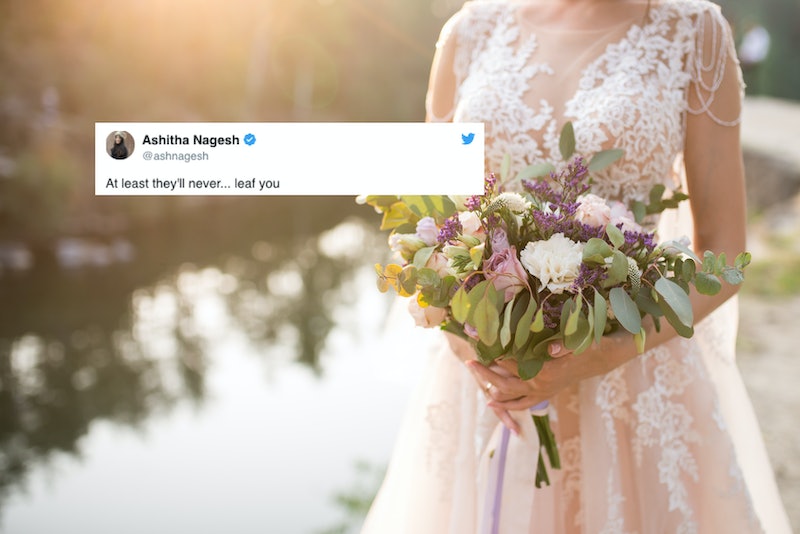 Dating and relationships nowadays can be straight up confusing, weird, and complicated. But, a recent string of marital unions that took place in Mexico may take the (wedding) cake for strange romantic experiences. On Monday, Mexican activists married trees in the most beautiful wedding ceremony you'll see today — and it was for a good cause. Though the prospect of marrying a tree over a man is probably all too relatable for many single millennials these days, the women who participated didn't do so because they were tired of modern dating: They did so to protect the environment.

As reported by Metro, the mock marriages were held as an act of artivism (aka, art activism) to protest illegal logging practices that have been in occurring San Jacinto Amilpas, Oaxaca, Mexico. A 2015 World Bank report revealed around 33 percent of Mexico was forest area, however, deforestation and illegal plantations have threatened the environment and ecosystems.

Richard Torres, a Peruvian artist, activist, and environmentalist, helped lead the eye-catching event. In 2014, Torres himself married a tree in Columbia to encourage people to better care for the environment, as well as promote peace in the South American country. During the recent event in Mexico, the bustling brides dressed head to toe in wedding attire (veil included) and posed with their new spouses — trees. And, some of the brides plopped a kiss on their tree hubbies for the wedding photos. Though some were monogamous marriage ceremonies, there were a few polyamorous trees, too. There was also a small reception on site, where the brides tossed their bouquets into the crowd of supporters and onlookers — unfortunately, no single trees caught the flowers. Honestly, the whole occasion was super sweet, and basically major wedding inspiration.

Sure, the idea of marrying something stoic and easy to deal with like a tree is probably tempting, because real relationships can be really complicated — especially when you throw hook-up apps and ever changing dating rules or etiquette into the mix. But, alas, trees cannot consent, so the unions held were a symbolic statement, rather than an actual legally binding agreement. Despite the fact that the marriages weren't exactly legit, it seemed like a good time for all involved, and it was genius way to bring attention to the illegal logging practices in Mexico.

TBH, it seems like many of the activists participating in the protest were really digging their tree husbands, and so were people on social media. The responses from on Twitter about the tree hugging (and marrying) event were flat-out hilarious. One Twitter user wrote, "Women in Mexico have given up on men and decided to marry trees instead. Their new grooms aren’t very talkative, but they are tall, do great things for the planet, and are renowned for their wood #wedding."

Of course, the protest also inspired a lot spot-on puns about dating trees. Upon reading the news, reporter and journalist Ashitha Nagesh tweeted out, "At least they'll never... leaf you." In response to Nagesh, Metro reporter Jen Mills tweeted, "They will though. Every sodding April..." Another person on Twitter cleverly joked, "Apparently there's a new dating app too called Timber."

Most of us probably couldn't even imagine tying the knot at all, let alone with a tree (or maybe you can — you do you), but the sentiment and symbolic value of the event was super important and powerful. Just like with the people we date, the environment deserves to be respected, loved, and cared for. Hopefully these brides and their plant partners live long, happy lives — with no more threats of deforestation.

More like this
8 TikTok Pasta Recipes To Try Out At Home
By Emma Garza
TikTok’s “5-9 Routine” Trend Is Here To Boost Your Productivity
By Courtney Young
What Is "The Ick?" The TikTok Dating Term, Explained
By Courtney Young
How To Make The Grinder Sandwich TikTok Is Obsessed With
By Emma Garza
Get Even More From Bustle — Sign Up For The Newsletter