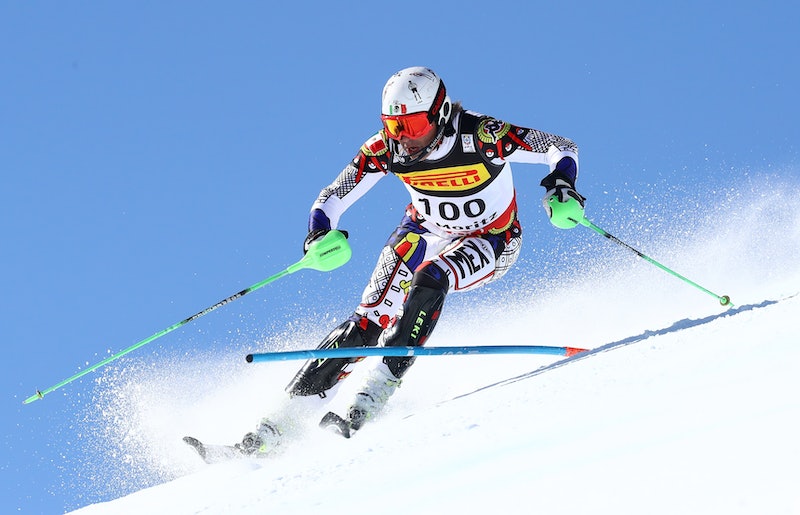 The Olympics are not exclusively about the fashion, but there are some uniforms that are meant to get noticed. It might only be the first day of the events, but Twitter has already deemed Mexico's Ski Uniforms the best of the Olympics. The team always steps out in quirky uniforms that are just as trendy as they are a homage to the country, and this year is no different.

The Olympics are just as much about repping team pride as they are about putting your best foot forward as an individual. Team Mexico has nailed both. According to CBS News, Hubertus Von Hohenlohe has been called the world's most interesting Olympian, so it only makes sense that he designed the world's most interesting uniform. The suits were inspired by Día de los Muertos, also known as Day of the Dead or All Souls' Day.

The black bodysuits have sugar skulls of different sizes throughout the suit and have the team name down the leg. The race suits were designed by six-time Olympian Hohenlohe, who is known for his quirky and culturally appropriate outfits.

Rodolfo Roberto Dickson Sommers, Sarah Schleper, and Hohenlohe will all compete is the Day of the Dead inspired outfits for the Alpine Skiing event, which will take place from Feb. 12 tot he 24.

This is far from the first quirky design from Hohenlohe. He wore a Mariachi-inspired suit at the 2014 Olympics, which caught people's attention. It only makes sense that he would keep the traditional alive at the 2018 Olympics as well. Unfortunately, the Olympics doesn't give extra points for outfits. If they did, Team Mexico would automatically win.

While Team USA has some incredible outfits as well, they aren't quite as quirky as Mexico's. Team USA's outfits stick to sleek, minimal details in the colors red, white, and blue. Mexico's look transcends patriotic and goes into the culture behind the skiiers, which is what makes them so great.

Twitter has already deemed Mexico's uniforms as the gold medal winners in the name of fashion. You know, despite the fact that the athletes have yet to hit the slopes. These gorgeous skii outfits might just get all of you fashion lovers out there to actually watch sports.

Any team that has matching dad-hats to their outfits is a winner in my book. Outfits might not count for the judges, but it does to all of the fans.

They're not just great, they're brilliant. The way that they combine personal style, trends, and culture all into something that anyone from the country would like to wear.

Okay, I know this is about the suits and all, but can we just talk about Schleper's flower crown? Because it really is the cherry on top of a fantastic outfits. It's all about the details and she nails it with her accessories.

Because if you work your butt off to get to the Olympics, you might as well have some fun with it. It's a shame that the Olympics are only once every four years.

When you see an outfit (and Olympian) this good, you have to step out onto the slopes and snag a photo with them. Note: there's also a matching headband to go along with the outfit and dad hat.

This Twitter user is making references to the Disney movie Coco.

These aren't just great suits. These are THE best suits at the Winter Olympics, according to fans.

Just look at the history of iconic outfits. It doesn't get much better than this.

If this doesn't prove that fashion lovers should be fan of the sports event, then I really don't know what will.