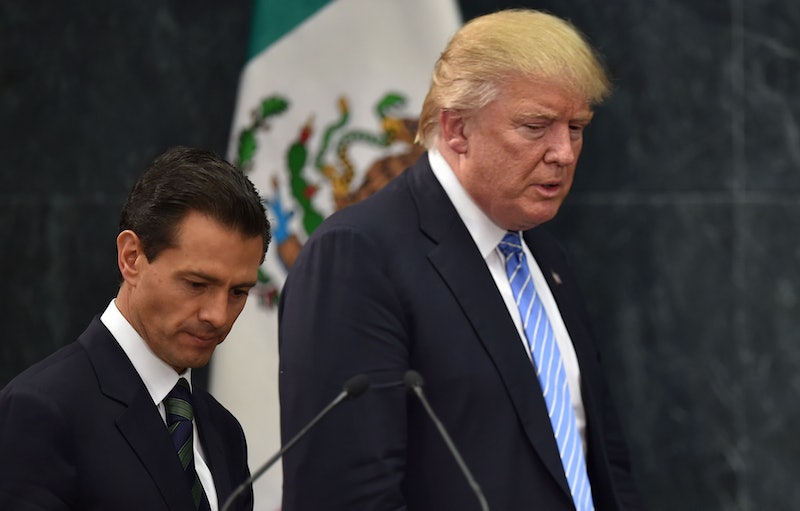 It's been under a week, and President Donald Trump, who promised to shake things up in American foreign policy, has already caused upheaval in American diplomacy. Mexican President Enrique Pena Nieto has canceled a planned summit with President Trump over Trump's executive order calling for a wall built on the countries' border. As America's neighbor, military ally as recently as 2011, and third largest trading partner, Mexico usually enjoys friendly relations with its neighbor to the North. This kind of diplomatic snubbing is close to unprecedented in recent relations between the two countries.

Pena Nieto and Trump had previously met together during the presidential campaign at a surprise visit. The two acted cordially, despite Trump's frequent verbal attacks on the country throughout the campaign. The two disagreed at the time over Trump's insistence that Mexico would pay for his planned border wall between the two countries, which Pena Nieto resolutely insisted they wouldn't. With Trump now the actual president of the United States, that issue of payment remains central in this current dispute.

On Wednesday, President Trump signed an executive order calling for the building of the wall, as well as sweeping actions to deport illegal immigrants from the United States. Trump's actions were almost immediately met with protests in Mexico. Pena Nieto swiftly shared a video statement on Twitter declaring that Mexico would not pay for the wall, and that Mexican consulates in the United States would serve as sanctuaries for immigrants targeted by American law enforcement:

"Where there is a Mexican migrant at risk that requires our support, your country should be there," Pena Nieto said in the video.

Wednesday morning, Trump tweeted his own response to Pena Nieto's rejection of his orders, complaining about what he sees as trade issues between the two countries. He floated the prospect of canceling the meeting, hours before the Mexican president did just that:

Pena Nieto announced he would skip the meeting on Twitter, tweeting: "This morning we have informed the White House that I will not attend the meeting scheduled for next Tuesday with the @POTUS."

The cancellation comes in the midst of a presidential transition that is still in the process of taking the reins of American foreign policy. President Trump's nominee for secretary of state, Rex Tillerson, has still not yet been confirmed by the Senate, and Thursday morning, much of the State Department's administrative leadership resigned after having worked for both Republican and Democratic administrations in the past, exacerbating a staffing vacuum within the foreign policy ranks of the Trump administration. According to the Washington Post and the Partnership for Public Service, there are still 257 positions at the State Department requiring Senate confirmation that have yet to receive nominees from the president, including an ambassador to Mexico.

President Trump seeks an ambitious agenda with Mexico, not only calling for America's southern neighbor to pay for its construction projects, but also demanding renegotiation on trade deals between the two countries. It is uncertain at this point how the inflamed rhetoric and harsh diplomatic stances between the two presidents will affect Trump's hopes of getting concessions from Pena Nieto.