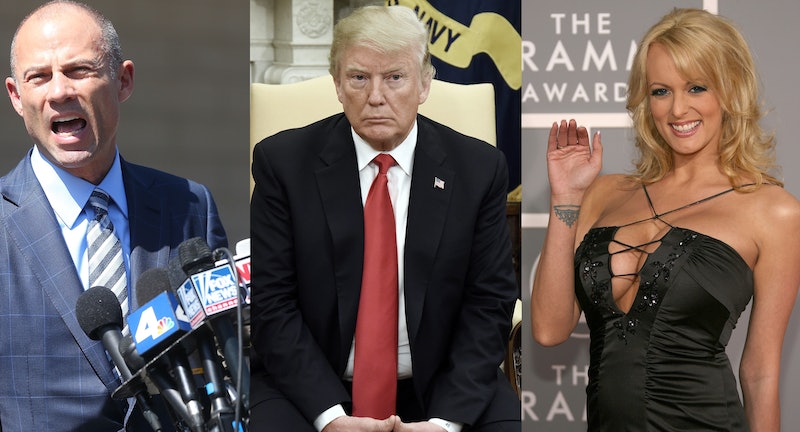 Getty Images
By Amanda Carpenter
May 8, 2018

It is it even worth proving that President Trump and his allies lie anymore? Analyzing and exposing them is exhausting. Besides, every time anyone successfully shows what we all know to be true, Trump and his merry band of schemers are off to the next big distraction.

So, how does anyone take him on? Enter Michael Avenatti, an unlikely hero who has done more to push back on Donald Trump’s nonsensical narratives than the entire Democratic Party. In case you haven’t seen him in his dozens of swaggering TV appearances, he’s the lawyer for the adult film actress Stormy Daniels. Earlier this year, The Wall Street Journal revealed that Daniels, whose real name is Stephanie Clifford, accepted a $130,000 payment from Trump’s lawyer Michael Cohen in October 2016. The payout was in exchange for her silence; she signed an NDA agreeing never to speak about her alleged affair with Trump.

True to form, former Trump spokesperson Hope Hicks denied the affair outright — she called it “absolutely, unequivocally” false — and the rest of Trump’s surrogates fell in line before the whole lie unraveled. Many of them argued the president was the victim, that he was the one who was being exploited.

"Rather than run from Trump’s gaslighting, Avenatti and his client made the decision to dig in and withstand the fire."

Yet, Avenatti and Daniels understand what all of Trump’s opponents don't. Trump is a bully who must be confronted in full view of the public. Anyone who challenges Trump must know that he will lie; he will use anything and everything to discredit you. He will fight dirty.

Avenatti’s strategy showcases a lot of the advice I give candidates in my new book, Gaslighting America: Why We Love It When Trump Lies to Us. Rather than run from Trump’s gaslighting, Avenatti and his client made the decision to dig in and withstand the fire. They would meet Trump on his turf — in the media. They knew this was a high-wire show everyone would watch (and love every minute of it).

Case in point: Anderson Cooper’s 60 Minutes interview with Daniels drew 22.1 million viewers. It was the highest-rated episode in 10 years. Daniels has also taken her story to Jimmy Kimmel Live and The View. This requires confidence. It requires nerve. It requires authenticity and owning each and every one of your flaws as the world picks apart your every move.

But oh, how it’s paid off. In a span of a few months, team Trump has gone from denying the arrangement with Daniels as “absolutely, unequivocally untrue” to admitting that yes, the president did pay Daniels to stay quiet about an alleged affair.

The critics can go ahead and sneer at Avenatti for being a media-hungry lawyer. But, he’s slowly but surely backing Trump into a corner. That reality is obvious to anyone who’s watching him — he’s having fun. Why shouldn’t he? He’s winning. The Democrats ought to take some notes. #BASTA.

Amanda Carpenter is a CNN contributor and author of the new book Gaslighting America: Why We Love It When Trump Lies to Us.

This op-ed solely reflects the views of the author.