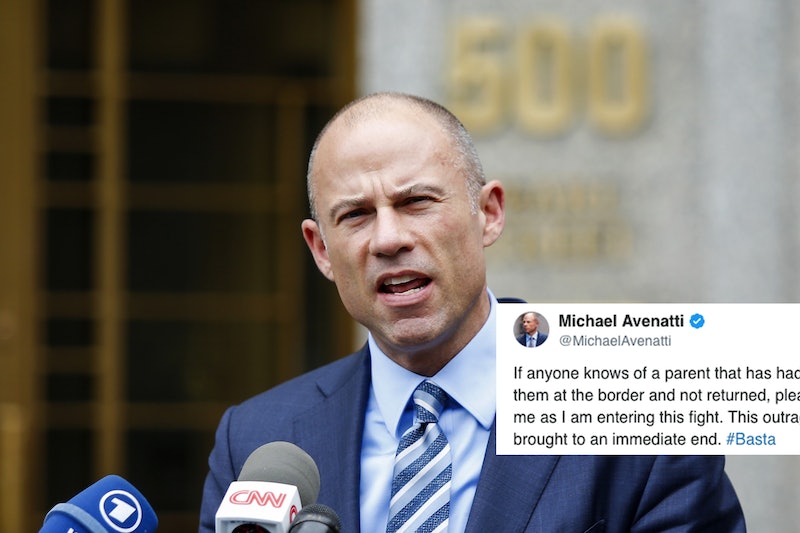 Lawyers have been at the border working hard to defend families from the Trump administration "zero tolerance" policy that separates young children from their parents. Now one famous attorney is joining in. Michael Avenatti is entering the immigration fight and will provide legal aid to parents, he said on Sunday. The lawyer for Stormy Daniels took to Twitter to call out the Trump policy, writing, "This is not my America. This is not our America," with the hashtags #Outraged and #Basta, one of his favorites.

The first tweet was a quote tweet of a New York Daily News cover of a 2-year-old girl from Honduras crying as her mother is detained. Avenatti continued in a second tweet, making his offer of legal aid.

"If anyone knows of a parent that has had their child taken from them at the border and not returned, please have them contact me as I am entering this fight," he wrote. "This outrageous conduct must be brought to an immediate end. #Basta"

The policy has continued to garner attention over the weekend, especially on Father's Day, and marks an abrupt change with past administrations. Under the new "zero tolerance" policy, adults who have arrived at the southern border with their children are now being charged with a criminal offense of illegal entry. At that point, their kids are taken away and go through a separate, slower judicial process.

Avenatti also targeted the man reportedly behind the policy, Trump's adviser Stephen Miller. “No nation can have the policy that whole classes of people are immune from immigration law or enforcement,” Miller told The New York Times. “It was a simple decision by the administration to have a zero tolerance policy for illegal entry, period. The message is that no one is exempt from immigration law.”

Stephen Miller: Congrats, the separation policy that you sold to your boss Mr. Trump will result in images that will crater you both. We will ensure you will never escape them. In your fascist zeal, you forgot that mothers are mothers first, regardless of their politics.

The policy affected nearly 2,000 children over a six-week period from mid-April to the end of May, the Associated Press reported on Friday. Visits by lawmakers to Border Patrol detention facilities Sunday found even more children and families being held in cages, conditions that various U.S. senators and representatives denounced as "grim."

Attorney General Jeff Sessions, who first announced the policy in April, defended it on Thursday using the Bible. “I would cite you to the Apostle Paul and his clear and wise command in Romans 13, to obey the laws of the government because God has ordained them for the purpose of order,” Sessions said.

The tweets from Avenatti came after he appeared on MSNBC's AM Joy Sunday morning. He told host Joy Reid that he was shocked that the children and their parents were not being given legal representation. "It's entirely improper," Avenatti said.

He went on to argue that there is a racial element at play, too. "If there was a white family from middle America who traveled to another country — even if they traveled there illegally — and attempted to enter that country and had a little girl or little boy taken from them, separated from them, and detained like this, our nation would be outraged," Avenatti told Reid over the phone.

"This is not appropriate, we cannot treat children this way," Avenatti continued. "It's outrageous this is going on in modern-day America."

Not long after his appearance Avenatti offered his help via Twitter and committed to "entering this fight."