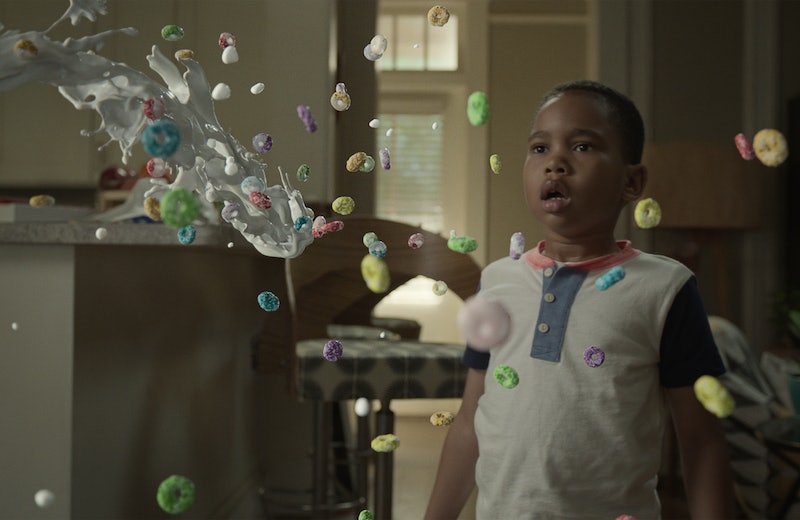 Being a single mother is hard — being a single mother to a child with superpowers is even harder. After years of anticipation, the first look at Netflix and Michael B. Jordan's Raising Dion teases a brand new type of superhero origin story, centering on a young boy coming into his own powers, while his mother attempts to balance motherhood and dealing with telekensis.

Based on Dennis Liu and Jason Piperberg's cult hit comic book, Raising Dion stars Alisha Wainwright as Nicole, a single mother who's son, Dion (Ja’Siah Young) begins exhibiting superhero-like abilities shortly after the mysterious death of her husband, Mark (Jordan). "Nicole must now keep her son’s gifts secret with the help of Mark’s best friend Pat (Jason Ritter), and protect Dion from antagonists out to exploit him while figuring out the origin of his abilities," the official synopsis teases, noting that Nicole also begins discovering that Mark's death was more sinister than she originally thought.

"You come across so many superhero stories that usually are from the perspective of the person inflicted with the powers," Wainwright told Entertainment Weekly about what attracted her to the show. "It was so refreshing to hear the story from the person whose life is so dramatically affected by that: the caregiver of that young person."

While the story will mostly focus on Nicole and Dion, Jordan — who is an executive producer on Raising Dion — will play a recurring role. Described by Netflix as "an adventurous, intelligent man," who worked as a scientist. Mark's job "led to his demise," which leaves Nicole to uncover the circumstances of his death and how they're related to Dion's new powers.

And if fans are tuning into Raising Dion in order to see Jordan, they're not the only ones — as a Black Panther superfan, Young was delighted by getting to see Jordan play a smart and loving father. Telling EW that it was "amazing," to work with Jordan, Young gushed that despite playing the "bad guy" in the Marvel franchise, Jordan is "a good guy in real life."

While it seems like Mark will only appear on the show in flashbacks, Nicole will get some help balancing the "hectic" day to day activities of having a child with superpowers and protecting Dion from those who are out to study him, from Mark's best friend, Pat (Jason Ritter). "Pat was Mark’s best friend since their college days at Columbia, and after Mark’s passing makes a big effort to be there for Nicole and Dion, and loves them like family," the summary notes.

In an October 2018 interview with Vanity Fair, Jordan talked about his desire to create stories about black characters that feel universal and connect with a wide variety of audiences. "I’m first and foremost a black man, for sure, but what I’m trying to do, and what I’m trying to represent and build, is universal," he told the outlet.

"We don’t have any mythology, black mythology, or folklore," Jordan added, later in the interview. "Creating our own mythology is very important because it helps dream. You help people dream."

With its unique take on the superhero mythos — and its introduction of a new, family-centric hero that fans can follow along his journey to owning his abilities — it seems like Raising Dion will help kids and adults alike dream, just like Jordan wants.

More like this
Nicola Coughlan Shared A Lady Whistledown Excerpt From ‘Bridgerton’ Season 3
By Grace Wehniainen, Alyssa Lapid and Sam Ramsden
Netflix Reveals First Look At Wednesday In The 'Addams Family' Spinoff Series
By Bustle Editors
The New Bachelor Will Be Announced Next Week & Here Are The Top Contenders
By Grace Wehniainen
The 'Andor' Timeline, Explained
By Gretchen Smail
Get Even More From Bustle — Sign Up For The Newsletter