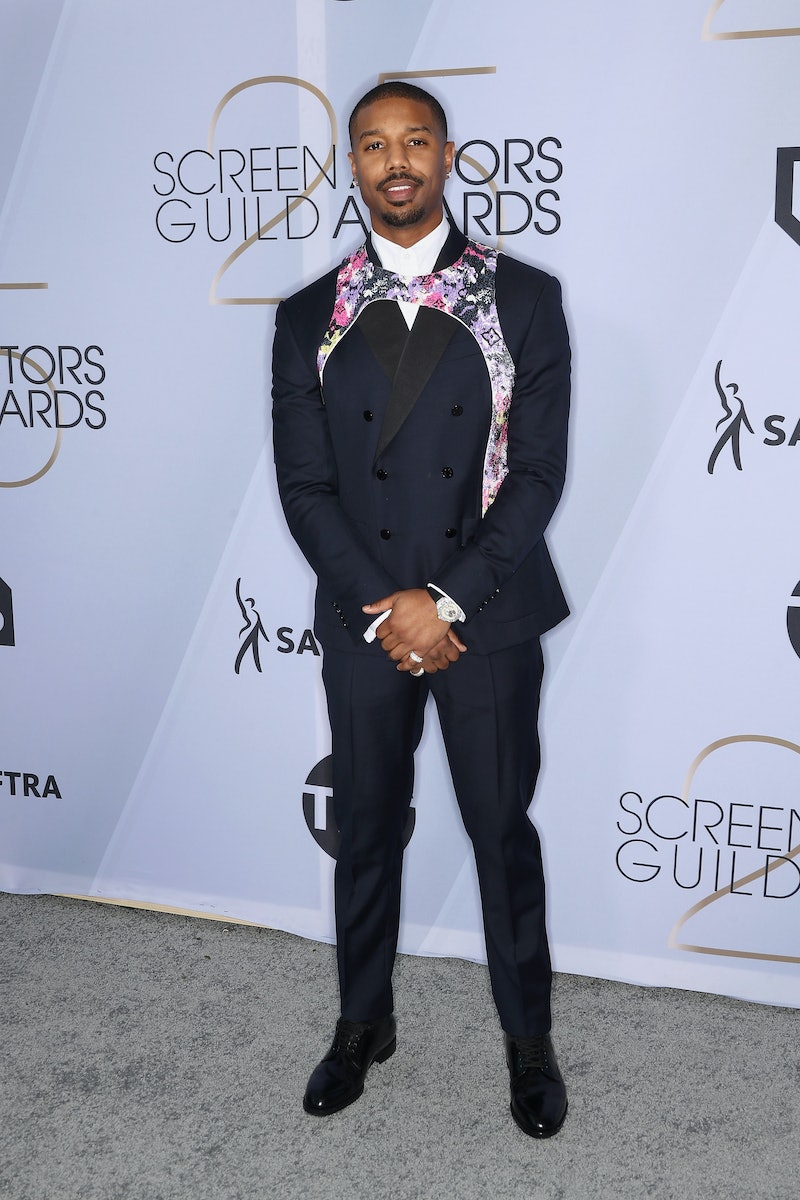 There has been a cool awards season red carpet trend in 2019 and it's beyond unique. Male celebs are putting their very own spin on a very specific and unusual accessory. Black Panther star Michael B. Jordan wore a Louis Vuitton harness to the 2019 SAG Awards. It was both similar to and entirely different from the harness that Timothee Chalamet wore to the 2019 Golden Globes, which was also by Virgil Abloh for Louis Vuitton.

Jordan's harness boasted a print pattern and provided a contrast to his classic, navy blue suit, while Chalamet's was sparkly and matched his all-black outfit.

Chalamet's ensemble was one of the most-discussed looks of the Globes. Amidst all the fuss, the brand clarified that it wasn't actually a harness — despite looking like exactly that. It was ultimately described as an embellished "bib," according to the UK edition of Vogue. The actor also appeared on The Ellen Show after the fact and revealed that he was also told it was a bib so he thought it was a bib.

Terminology aside, these harnesses (or bibs) have certainly been asserting themselves in the fashion space at Hollywood prize-giving ceremonies. They are unusual, eye-catching, and head-turning.

It really doesn't matter what they are called. All that matters is that A-listers are crushing them when wearing them.

Here's a closer look at MBJ rocking that bib. It was asymmetrical and longer on one side than the other. It added a splash of pink and purple color to a dark and snazzy suit.

Jordan wore his bib over his jacket, while Chalamet was jacket-less.

Enjoy this up-close-and-personal look at the bib. What a sharp-dressed man. The bib took the place of the traditional tie. Who needs a tie when you can have a harness, er, bib? Jordan certainly looked fantastic and fashion-forward while rocking his. It was an excellent execution of classic and edgy.

Even this black and white shot shows what a terrific contrast the bib, which sort of looks like a "side tie," provides.

Take a look at the side view.

Lastly, here's a peek at the back view.

Here's another flashback to earlier this month when Chalamet rocked his beaded bib.

New York Times fashion critic Vanessa Friedman also confirmed with the fashion house that Chalamet's accessory was an "embroidered bib." There you have it.

From this particular vantage point, Chalamet's bib mimicked a vest. It also replaced a tie for him. Since he wasn't wearing a jacket or blazer, it took on a vest-like quality. Perhaps since his ensemble was monochromatic and because he didn't wear it over top of a jacket, Chalamet's bib didn't look quite as contrasting as Jordan's did.

While the accessory doesn't quite resemble my typical perception of a bib, I'm already excited to see who rocks one at the upcoming Grammys and/or Academy Awards.

Ultimately, Jordan and Chalamet are two supremely talented and stylish celebs. Both showed us two very different ways to slay the same accessory, which is apparently on its way to becoming a menswear accessories trend in 2019. Both looked dapper, dashing, and debonair.

More like this
Harry Styles’ Red Carpet Looks Have One Thing In Common
By El Hunt
15% Pledge Director LaToya Williams-Belfort On The Impact Of Supporting Black Business
By Dominique Norman
Bella Hadid's Best Runway Looks From Paris, Milan, & More
By Allie Fasanella
Zendaya’s Sheer Valentino Look Won Paris Fashion Week
By Dominique Norman
Get Even More From Bustle — Sign Up For The Newsletter