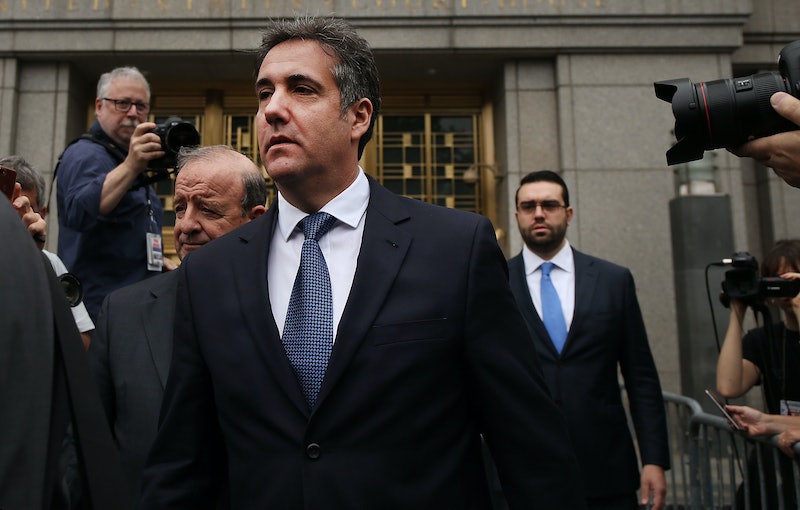 President Donald Trump's longtime personal attorney Michael Cohen pleaded guilty to multiple counts, including a campaign finance violation, on Tuesday, according to The New York Times. The guilty plea was part of a deal he made with federal prosecutors in the Southern District of New York; Cohen now won't have to face a trial on those charges.

But he also dropped a bombshell at a hearing in Manhattan federal court. Cohen told the judge that a federal candidate for office directed him to break election laws governing campaign contributions. He didn't name that candidate, but The Wall Street Journal reported that Cohen admitted in his guilty plea to breaking the law by paying $130,000 to a woman who said she had an affair with Trump. Times reporter Maggie Haberman cut to the chase on Twitter: "Cohen just directly implicated Trump."

After the hearing, Cohen's attorney said that the candidate who directed him to break the law was Trump. "Today he stood up and testified under oath that Donald Trump directed him to commit a crime by making payments to two women for the principal purpose of influencing an election,” Lanny Davis tweeted. “If those payments were a crime for Michael Cohen, then why wouldn’t they be a crime for Donald Trump?”

Cohen pleaded guilty to two campaign finance violations, five counts of tax evasion, and one count of making a false statement to a bank, according to The Washington Post. He was released on a $500,000 bond, Bloomberg reported, while a judge set a sentencing hearing for Dec. 12 and said Cohen faces a prison sentence of 46 to 63 months.

The case against Cohen was referred to prosecutors in New York by special counsel Robert Mueller, who heads the federal investigation into whether the Trump campaign and Russia coordinated to interfere with the 2016 election. The FBI raided an office, a home, and a hotel room all belonging to Cohen in early April. Investigators seized a slew of documents, including emails, tax documents, and business records, as well as Cohen's computer and phone. But the FBI raid may not have been the first time Cohen landed on investigators' radar; according to NBC News, federal investigators were monitoring Cohen's phone for some time prior to the raid.

A seemingly frustrated Trump characterized the FBI raid on Cohen's office as a break in, calling it "a "disgraceful situation" and "an attack on our country in a true sense." The president also said the raid was "an attack on all we stand for."

At the time, The Washington Post reported Cohen was "under federal investigation for possible bank fraud, wire fraud and campaign finance violations." The case against him included an investigation into a $130,000 payment Cohen said he made ahead of the 2016 election to adult film star Stormy Daniels, who alleged she had an affair with Trump in 2006.

Cohen has said that payment was unrelated to the election, and Trump has denied that the affair took place. But Trump's current lawyer, Rudy Giuliani, has said that Trump did reimburse Cohen for the Daniels payment.

In June, Cohen switched up his legal team. He's now represented by Lanny Davis and Guy Petrillo, and some speculated at that time that Cohen was switching his legal representation to cooperate with investigators (a source told ABC News it was due to a fee dispute instead). According to the Journal, Cohen's plea deal does not require him to cooperate with the government in any other cases.

That means Cohen, who served as Trump's personal lawyer and "fixer" for years and has said he'd "take a bullet" for the President, won't have to cough up any more information about him. But it looks like the damage is already done from Cohen's courtroom admission alone.

Catherine Thompson contributed to this report.