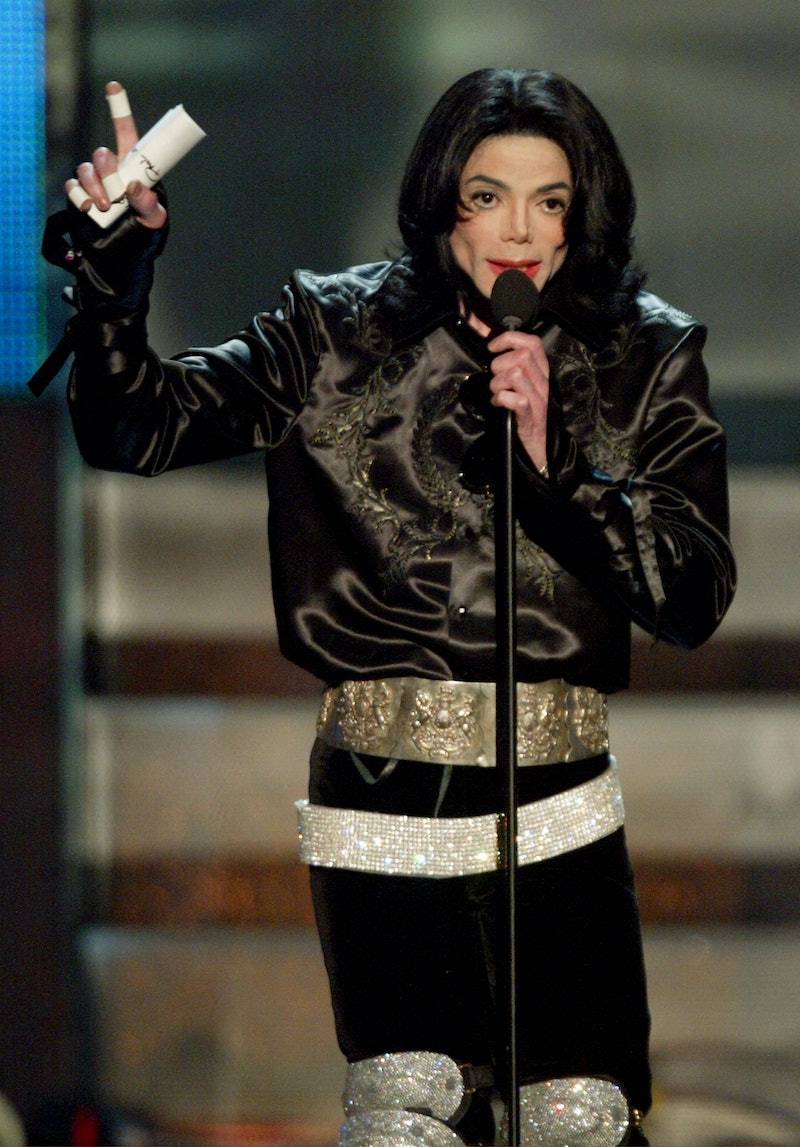 Leaving Neverland, the documentary about Michael Jackson that premiered at Sundance this weekend, is already causing plenty of controversy. Michael Jackson's family's statement about the documentary shows they don't approve of its content, which focuses on the allegations that the late singer abused young boys.

"Michael Jackson is our brother and son. We are furious that the media, who without a shred of proof or single piece of physical evidence, chose to believe the word of two admitted liars over the word of hundreds of families and friends around the world who spent time with Michael, many at Neverland, and experienced his legendary kindness and global generosity."

As Variety explains, the two people whom the statement calls "liars" are Wade Robson and James Safechuck, men who allege in the documentary that they were abused by Jackson. Robson sued the Jackson estate in 2013, but the judge dismissed the lawsuit in 2017. As Page Six reported at that time, Robson had said in 2005, during another trial, that Jackson hadn't molested him. Safechuck said the same thing at the time, Variety notes. But in the new documentary, both Robson and Safechuck allege that they were sexually abused by the singer when they were children.

Based on the reviews from critics who've seen the film so far, the allegations included in the documentary are horrifying. The Telegraph reports that Safechuck shows a small ring in the movie, which he claims Jackson gave him in a "mock wedding ceremony." And according to IndieWire, the documentary details specific sexual acts that Jackson allegedly asked the two children to perform.

According to IndieWire, the documentary details how Robson and James Safechuck first met the pop star. Safechuck co-starred with Jackson in a Pepsi commercial and eventually went on tour with him as a "featured dancer" at his concerts, while Robson won a dance contest where he showed off dance moves inspired by the singer. Variety's Leaving Neverland review calls the two men's accounts "powerful and convincing testimony that Michael Jackson was guilty of child sexual abuse."

The Jackson family's new statement, meanwhile, disputes the accounts and says there wasn't physical evidence found during the trials against Jackson. "Michael was subjected to a thorough investigation which included a surprise raid of Neverland and other properties as well as a jury trial where Michael was found to be COMPLETELY INNOCENT," the statement reads. "There has never been one piece of proof of anything. Yet the media is eager to believe these lies." The statement also claims that Robson and Safechuck's "allegations would not have been made" had Jackson still been alive.

Leaving Neverland — which will air in two parts on HBO on an unspecified air date — takes its title from Jackson's Neverland Ranch estate, where the alleged abuse took place. When the documentary does premiere to a wider audience, you can bet the controversy will only grow stronger.