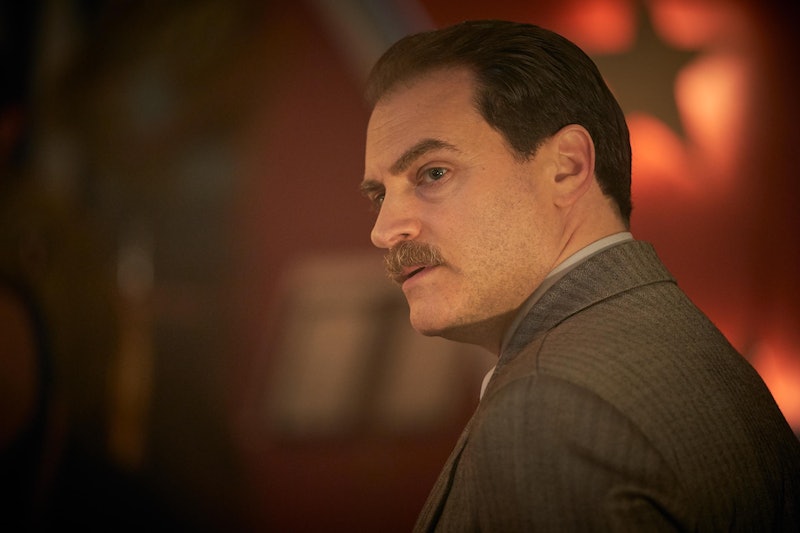 Traitors, the new Channel 4 spy thriller set in the aftermath of World War II, boasts a pretty stellar cast: Emma Appleton, Keeley Hawes, Brandon P Bell, and Luke Treadaway all appear. But who is Michael Stuhlbarg, who plays Rowe in Traitors? Given his impressive resume, there's a strong chance you've seen the Juilliard-educated theater veteran in at least one of his high-profile roles.

It's probably best to start with 2017, the year in which Stuhlbarg, born in Long Beach, California, appeared in a whopping three of the films nominated for best picture at the 2018 Oscars. "It's been a good year. I feel really really lucky to have been a part of all the things that seems to have sought me out. So I'm grateful," he told GQ.

In Luca Guadagnino's Call Me by Your Name, Stuhlbarg played Elio's father, Mr. Perlman, who delivers a heartfelt speech to his son towards the end of the film. "To make yourself feel nothing so as not to feel anything — what a waste!" Perlman says. Stuhlbarg told Deadline of the role, "I had been warned by my agent there was a really beautiful speech towards the end of the story, and so when it came along I was very taken with it. I loved the sentiment of most, if not all of the things that he got to say."

The same year, he played Dr. Robert Hoffstetler — scientist and Soviet spy — in Guillermo del Toro's The Shape of Water. (The role stands in stark contrast to his Traitors character, Rowe, who the Radio Times calls "furiously anti-Soviet," an American agent who is "convinced that the newly-elected Labour government is a sign of Russian influence.") "I leapt at the opportunity to be a part of it," Stuhlbarg told GQ. "With Guillermo there was a great sense that he was championing all of us individually. I think he had written each of these roles with all of us in mind."

Then there was The Post, the Meryl Streep and Tom Hanks-led Pentagon Papers thriller, directed by Steven Spielberg. Stuhlbarg played Abe Rosenthal, editor of the New York Times. Speaking to GQ, he said of his stellar year, "It was an embarrassment of riches for me to have these experiences all within the last year and a half and I'm wonderfully grateful for it all."

2017 was far from Stuhlbarg's breakout year, however. Let's run through some of his previous roles (a deep breath might be required): in 2009, he played Larry Gopnik in the Coen Brothers' A Serious Man. There was Martin Scorsese's Hugo in 2011, in which he appeared as Rene Tabard.

The following year, he played Congressman George Yeaman in Spielberg's Lincoln, while he played Arnold Rothstein in TV series Boardwalk Empire between 2010 and 2013. There were also roles in movies Steve Jobs, Trumbo, and Doctor Strange, as well as TV series Transparent, Fargo, and The Looming Tower.

Watching Traitors, and wondering why Rowe looks quite so familiar? There's your answer: you've probably seen Stuhlbarg in just about everything.