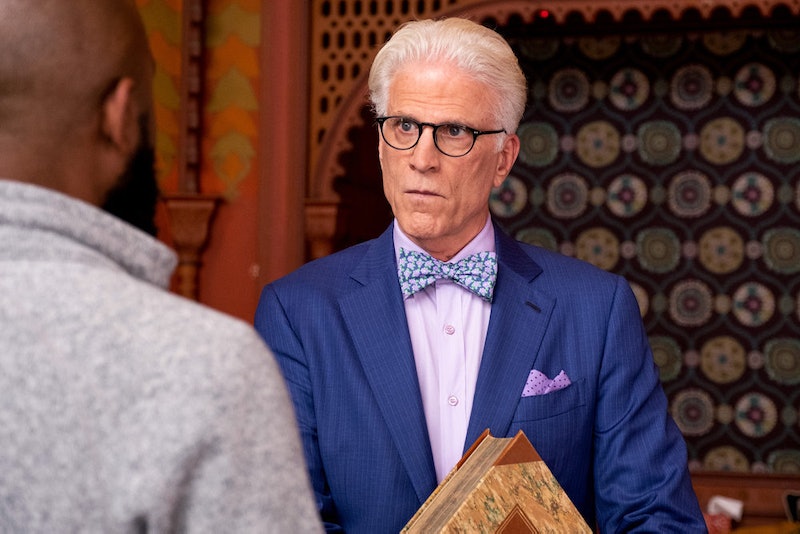 Spoilers ahead for The Good Place Season 3 midseason premiere. After some startling revelations, the stakes for Eleanor, Chidi, Tahani, and Jason — and the rest of humanity — seem higher than ever. As confirmed in the midseason finale, no one has made it into the Good Place in more than 500 years, which doesn't bode well for anyone hoping to avoid eternal torture. But not all hope is lost: the latest version of Michael's plan on The Good Place might be the one thing that can turn things around.

In the Jan. 10 episode, the gang has finally snuck into the actual Good Place. The catch? They're basically stuck in the mail room, with no way of entering the true utopia. They're under the watchful eye of one of its aptly cheerful employees (Nicole Byer), but eventually Michael steals away to find the Good Place committee. He explains that he thinks the Bad Place has been corrupting the points system that determines who reaches the Good Place, which would explain why no one has gotten in for the last five centuries.

The Good Place higher ups are rightfully horrified, but due to their strict dedication to rule-following and procedure, investigating the matter will take more than a thousand years. Michael is devastated: not only will his friends be trapped in limbo for who knows how long, but the Bad Place will also keep funneling decent people into their clutches until things are sorted out.

But then, a distressed Tahani enters, concerned about Jason and Janet's relationship. She wants to help them talk through their feelings, but everything she's doing seems to make things worse. "There are so many unintended consequences to well-intentioned actions," she declares,

Suddenly, everything clicks into place for Michael. He realizes that people are failing to get enough points to get into the Good Place because each "good" action sets off a dozen unintentional bad ones. For example, ordering flowers for someone might yield negative points if the order was made via a phone that was made in a sweatshop. Those details can make a huge difference, Michael says, because as the world becomes more complicated, so does being a good person.

So now, he's summoned the judge to reassess things. It's unclear what exactly Michael's plan is, but it seems like he's going to convince her to change the entire points system altogether. It's always seemed way more strict than it needs to be — as Eleanor said way back in Season 1, "This system sucks. What, one in a million gets to live in paradise and everyone else is tortured for eternity? Come on."

And surely, things can't be operating as planned. Eleanor wasn't a nice person, but she also didn't do anything catastrophically evil, and a loveless childhood is what made her cold to others. Chidi studied philosophy and morality the entire time he was alive, but he's sent to the Bad Place because he gets cripplingly anxious? That seems way too harsh. Jason was a criminal, but we can all see he has a heart of gold. And Tahani, though vain, was only insecure because of her upbringing, and did raise money for good causes.

There has to be some kind of gray area. A person's circumstances and intentions must count for something; some kind of forgiveness or leniency must exist. Michael seems to have zeroed in on the real problem, and now it's time to see if he can get the judge on his side.