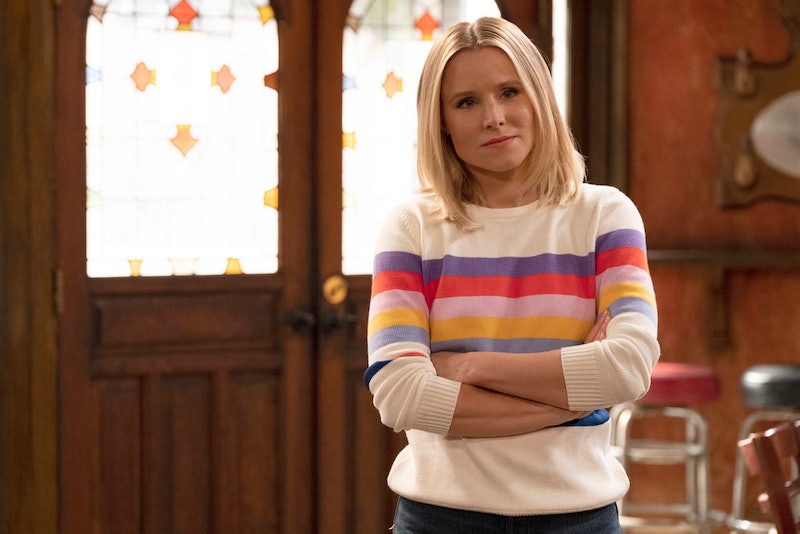 Spoilers ahead for The Good Place Season 3, Episode 7. It only took three seasons, but Michael has finally caught on to what many viewers have been saying all along: the points system on The Good Place is seriously flawed. It's something Eleanor herself mentioned way back in Season 1, Episode 1. "This system sucks," she said. "What, one in a million gets to live in paradise and everyone else is tortured for eternity? Come on."

Although Michael had his suspicions in Season 2 that maybe the system was not accounting for people's ability to change, he has now acknowledged that there's something much more seriously wrong with how the humans are being judged. In the final moments of Thursday's episode, he announced that he was going to go to the Accounting office to get to the bottom of the point totals and gather evidence to get the system changed. Of course, the group hit a snag when oncoming demons forced them into Janet's void rather than further on their quest — but at least Michael knows now that the afterlife system needs re-evaluating.

Michael came to this conclusion after he and Janet realized that Doug, their "blueprint human" for how to live a good life, was actually only doing nice things out of a desire to get into the Good Place and doing so at the expense of his own happiness. Demon Shawn even hinted that Doug will eventually end up in the Bad Place despite all his attempts at doing good. That's likely because the nuances of the points system are incredibly varied and set nearly everyone up for failure.

As we've seen with people like Tahani, it's not enough to give millions to charity if your intentions are to be applauded for it. And the negative ripple effects of Chidi's indecision show that the Good Place also evaluates people based on how their actions affect other people — whether they were well-intentioned or not.

Creator Michael Schur went into further detail about the points system with Entertainment Weekly, and it's no wonder that basically no one is good enough for the Good Place. "There is no one fixed value for any of these actions," Schur said. He explained that point totals are evaluated based on how each of your actions affects other people.

You're not so much evaluated on your own deeds, but rather on how those deeds affect other people. But, infuriatingly, there's no way to know if you ripping an allergy medicine ad out of a doctor's office magazine could lead to the next patient not knowing about the medicine and suffering from allergies forever and ever — another example from Schur.

The numbers associated with actions not only fluctuate, but some are confusing to begin with. Who decided that rooting for the Yankees was a negative action? How else does one blow one's nose but by "pressing down on one nostril and exhaling?" (Yes, folks, that earns you negative points.) Then you have to get into how good actions are praised more when the person on the receiving end enjoyed it more. You get more points for fixing a child's tricycle when that kid really loved tricycles than when the kid was indifferent to them.

Ultimately, what the point system truly measures is the thought process behind your actions (whether you were acting selfishly or unselfishly), the effect those actions have on others, and also how others feel about those actions. You can only control one of those, which makes the whole system impossible to anticipate without being completely miserable worrying about it.

Even Doug, who has done nothing his whole life but try to make others happy, is likely to end up in the Bad Place. After all, he's only being good because he thinks he should, and he tries to appease people like the young bully who demands Doug give up his shoes. That kid was not actually happy to get Doug's shoe, thereby erasing any good points Doug would have gotten from giving up this earthly possession.

Now that Michael, Janet, and the others are on the same page about this flawed system, they need to work to fix it. Doing so could totally change the course of the show and give Eleanor what she wanted in Season 1 — something for the medium people in life who weren't great but also weren't terrible, who are at the mercy of a system designed to send most people to the Bad Place.

Now, systematic change can't happen overnight, especially since the group is currently trapped somewhere in Janet's void. But just the fact that they're on the road to trying to remedy this is a step in the right direction for anyone in the Bad Place who was ever punished for effects outside of their control.