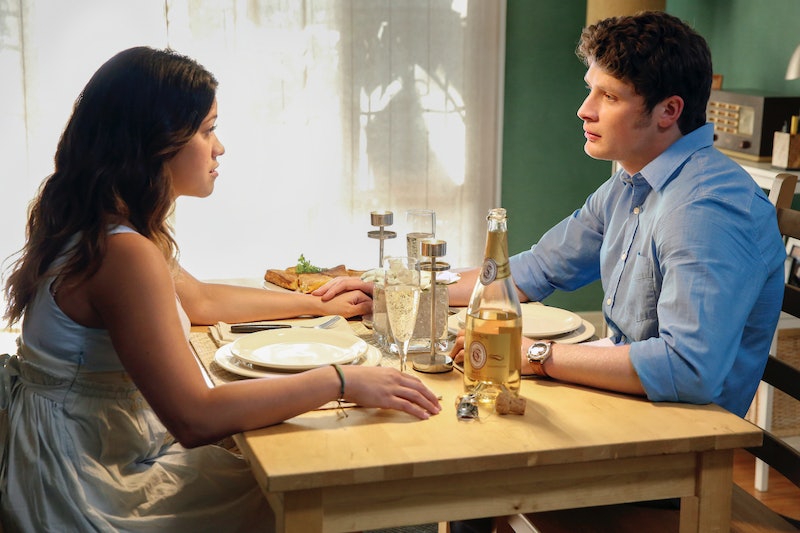 Spoilers ahead for the Jane the Virgin Season 5 premiere. He's back! As viewers saw in the show's shocking Season 4 finale, Michael is alive on Jane the Virgin, but now we finally know how it all went down. In classic telenovela form, it's complicated. As audiences learn in Episode 1, it was all thanks to Rose (because of course it was). "I faked his death," she tells a horrified Rafael in a flashback. "Tetrodotoxin to slow his heart rate, and then my EMT drivers took him away. You wouldn't believe how easy it was to incentivize a morgue pathologist with a gambling problem to sign a death certificate."

And none of this should come as a real surprise — Jane the Virgin has already explored plotlines like secret twins, plastic surgery-induced doppelgängers, sinister moms with eye-patches who can secretly walk, artificial insemination, and infant kidnappings, so a faked death is basically child's play.

But Michael's return was still shocking, since audiences had truly come to accept that he was really gone — much like Jane, who had just begun to build a life with Rafael. But isn't it just like a classic, Friday night cliffhanger for Jane's husband to come back from the dead the same night she's going to get engaged to her baby daddy?

But it seems like Michael — or Jason, as he's called now — has had an equally rough go of it the last few years. And he doesn't remember anything about his former life, as he explains to Jane and Rafael. "Jason" tells them that he woke up four years ago in a field in Montana, and a woman (likely Rose) told him that he'd been involved in some trouble and to start over. Scared that he was actually a bad person in his former life, he never investigated where he'd come from.

What's more, audiences learn that Rose was the one who caused his amnesia, giving him electroshock therapy until his memories were gone. Whether or not this could really happen, it certainly explains why Michael would show up after audiences could have sworn he really died during his LSAT exam.

But why is Michael only turning up now? It's unclear, although audiences know that Rose was trying to strong-arm Rafael into telling her where his sister, Luisa, is. And it seems like he gave her location away, after all. Audiences see Luisa in an entire room filled with vegan donuts with a note that reads, "Don't forget me. I haven't forgotten about you." Furthermore, she tells her brother that she wants to help him figure out why Rose took Michael in the first place, because that's a mystery that still needs solving.

So what does this mean for Jane and Rafael the rest of the season? Although she and Michael are still technically married, the author has had four years to move on. And although Jane tells Rafael that Michael's reappearance doesn't change anything about their future together, the narrator hints that they're deluding themselves.

But even if Michael regains his memories and — in the process — his love for Jane, that doesn't mean the feeling will be mutual. Besides, Michael may even have the hots for Petra now. Who knows! It's a telenovela, after all.