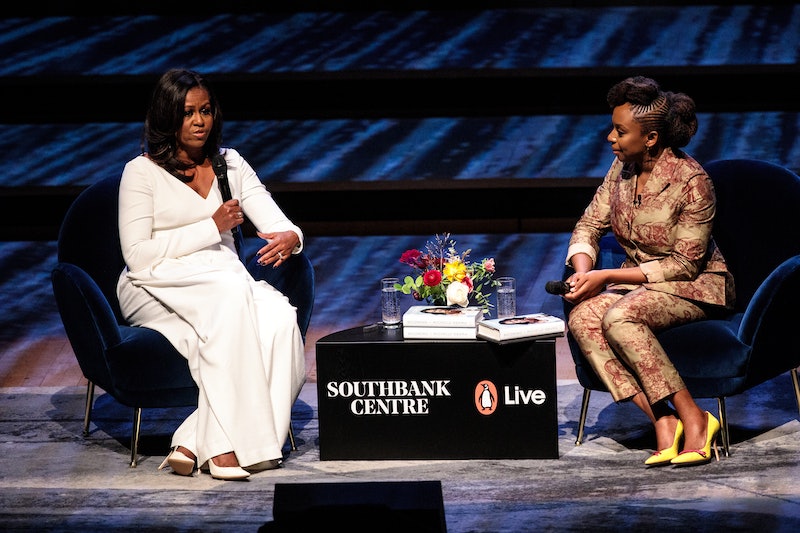 Over 40,000 people attempted to snag a ticket to Michelle Obama and Chimamanda Ngozi Adichie's conversation at the Southbank Centre's Royal Festival Hall, a venue with just under 3,000 seats, according to the BBC. Little wonder, then, that the majority left disappointed — but thankfully, those who missed out can still listen to and learn from the lawyer, writer, and forever first lady's words. In a discussion inspired by her new memoir, Becoming, Obama revealed her persistent sense of impostor syndrome, and addressed the demonisation of black women as well as the exclusion of women of colour from positions of power.

Speaking with novelist Adichie in front of the live audience, Obama said, "I still have a little impostor syndrome — it never goes away, that you're actually listening to me." She continued, "It doesn't go away, that feeling that you shouldn't take me that seriously. What do I know? I share that with you because we all have doubts in our abilities, about our power and what that power is."

"If I'm giving people hope then that is a responsibility, so I have to make sure that I am accountable," she said. "We don't have any choice but to make sure we elders are giving our young people a reason to hope."

As the BBC reports, Obama also discussed the appropriation of black women's bodies and style, saying, "The size of our hips, our style, our swag, it becomes co-opted but then we are demonised." She went on to address the feelings of inadequacy that are "profound for women of colour" and also experienced by women and working class people, saying, "My advice to young women is that you have to start by getting those demons out of your head. The questions I ask myself — "Am I good enough?' — that haunts us, because the messages that are sent from the time we are little is: 'Maybe you are not, don't reach too high, don't talk too loud.'"

Obama talked about her childhood, saying, "One of the things that my parents believed was that my voice was relevant, and my opinions were meaningful, and my anger and frustration was real, and that’s something that’s important for parents of any socioeconomic background to realise."

Her parents, she said, saw a "flame" in her. "And instead of doing what we often do to girls who are feisty which is try to to put that flame out, to douse it ever just so, because we’re worried about them not being ladylike or being bossy, they found a way to keep that flame lit, because they knew I’d need it later on," Obama said.

"And to have that flame lit in a girl means that you have to value her voice and let her speak, and learn how to use it," she added. World, what did we ever do to deserve Michelle Obama?