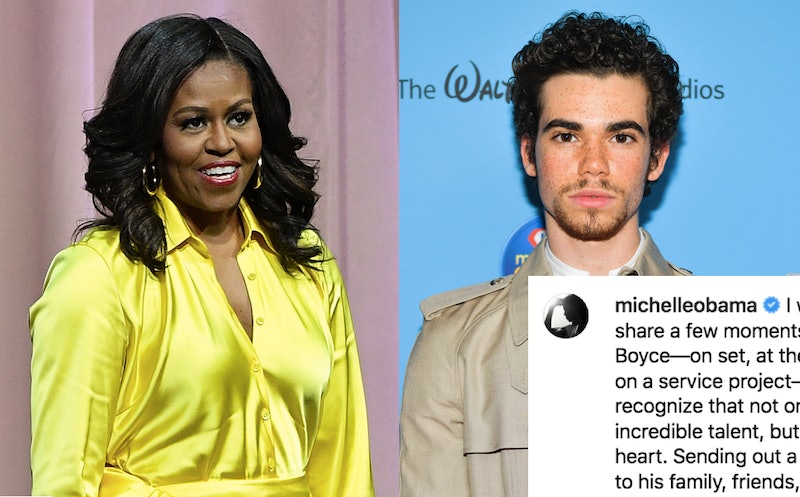 So many people took to social media to honor Disney Channel star Cameron Boyce after news spread about his death over the weekend, and the former First Lady is among them. Michelle Obama paid tribute to Cameron Boyce on Instagram on Tuesday, July 9 with a heartfelt post that acknowledged the actor's "incredible talent" and "incredible heart."

Obama's post shows her smiling with a younger Boyce. Her caption read,

"I was lucky enough to share a few moments with Cameron Boyce—on set, at the White House, and on a service project—enough time to recognize that not only did he have incredible talent, but also an incredible heart. Sending out a lot of love and hugs to his family, friends, and his many, many fans."

They first met in 2014 when Obama was a guest star on Jessie, the Disney Channel show that Boyce starred on from 2011 to 2015. As reported by People, Boyce and the rest of the Jessie cast were invited to the White House's annual Easter Egg Roll, and Obama and Boyce had another chance to meet one another. The "service project" that Obama mentioned was a Toys For Tots campaign, according to Deadline, that both she and Boyce worked on in 2016.

Boyce passed away on Saturday, July 6, due to what his family initially referred to as a "seizure which was a result of an ongoing medical condition for which he was being treated." He was only 20 years old. A spokesperson for his family later told ABC News on Tuesday, July 9 that the cause of death was epilepsy. Their official statement read,

"Cameron’s tragic passing was due to a seizure as a result of an ongoing medical condition, and that condition was Epilepsy. We are still trying to navigate our way through this extremely heart wrenching time, and continue to ask for privacy so that the family, and all who knew and loved him can grieve his loss and make arrangements for his funeral--which in and of itself, is agonizing."

Obama is one of many stars who spoke about the late Disney star on social media. Zendaya, a Disney alum herself, tweeted that the situation was "absolutely heartbreaking," while Boyce's Grown Ups costar Adam Sandler sent his condolences to Boyce's family on Twitter and said that the Descendants star was "just the nicest, most talented, and most decent kid around."

Some members of Boyce's family have publicly responded to the outpouring of love on social media. Boyce's father, Victor Boyce, wrote on Twitter that he was "overwhelmed with the love and support our family has received." He added, "It really does help to ease the pain of this nightmare I can't wake up from," and later retweeted a post from Billboard about Obama's tribute to his son.

Boyce's grandmother, civil rights activist Jo Ann Boyce, also told WATE, "We’re grateful for everyone who is sending us the love and the support that we need right now. Thank you."

It's clear that Boyce's family appreciates the public's supportive responses, and Obama's message just reconfirms how loved he was.

More like this
Jameela Jamil Defends Sam Smith After Trolls Body-Shamed Them
By Jake Viswanath
Britney Spears Shared The Real Reason She Shut Down Her Instagram Account
By Brad Witter
Twitter Is In Awe Of Taylor Swift’s “Lavender Haze” Music Video
By Jake Viswanath
Jennifer Coolidge Hunted For Jewels & Lashes In J.Lo’s Hotel Room
By Jake Viswanath
Get Even More From Bustle — Sign Up For The Newsletter
From hair trends to relationship advice, our daily newsletter has everything you need to sound like a person who’s on TikTok, even if you aren’t.