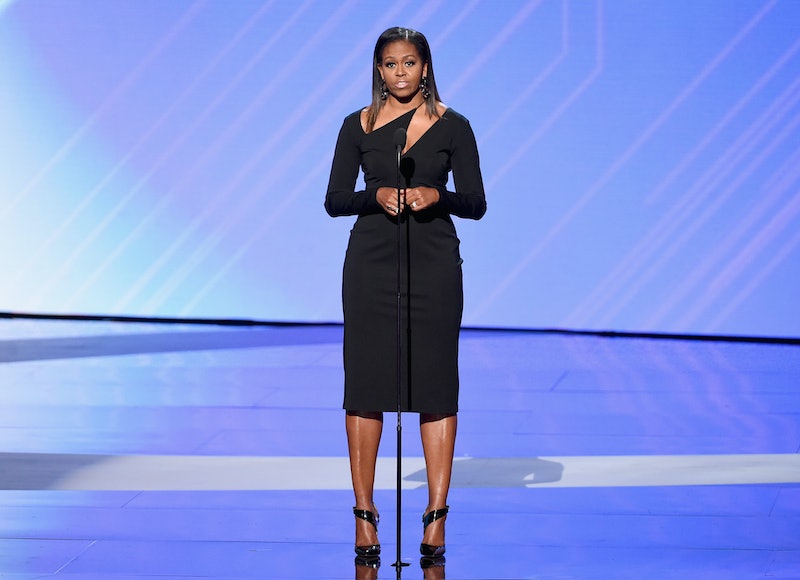 The former First Lady has largely kept to herself since she and her family left the White House, so her words have seemed to carry more weight when she has spoken out. Recently, Michelle Obama has had something to tell female Trump supporters — namely, that they were voting against their own interests.

"Any woman who voted against Hillary Clinton voted against their own voice," Michelle said at this year's Inbound business conference during a question-answer session. "Quite frankly we saw this in this election, as far as I'm concerned."

Many female voters, she said, had decided that "[Trump's] voice is more true to me," which she used as an example of people not staying true to their authentic selves. "Well, to me that just says, you don't like your voice. You like the thing you're told to like," she went on to say.

This explanation referred to a sizable chunk of the female population of the U.S. — 42 percent, to be exact, including 53 percent of white women. The least likely to vote for Clinton were also those most similar to her, at least demographically speaking: white, heterosexual, married. Clinton, of course, aimed to represent all Americans in her platform and her outreach — but somehow she was unable to get through to the people who were most like her, and Michelle definitely refers to that issue in her discussion on the subject.

Michelle, who never had the ardent political leanings of her husband, nevertheless became a potent tool for the Democrats in 2016. She didn't campaign as frequently as some of Clinton's other surrogates, and she was generally only deployed to the places where the Clinton campaign felt they were most in need of a boost. Everyone seems to agree — Michelle's words simply hold power, whether or not she ever wanted to be at the forefront of the political stage.

Even with Michelle's strategically placed speeches, though, Clinton lost the election — in part because of the fact lots of women didn't vote for her. People generally assumed a huge gender gap would propel her to the presidency — but of course that didn't happen.

Clinton herself actually has a theory about why things went that way, and it's related to what Michelle expressed. In an interview with NPR's Morning Edition, while promoting her new book, Clinton said:

This is essentially Michelle's theory put in another light — women who decided to vote for Trump didn't listen to what the voice inside themselves was telling them to do, and instead bent to outside forces, whether it was Trump's messaging or what they were hearing around them.

Attacking women like this hasn't always gone over well, so Michelle would probably be right to expect some backlash. In February 2016, when former Secretary of State Madeleine Albright used the line "there's a special place in hell for women who don't help each other" towards female Sanders voters, she provoked so much outrage that she ended up having to write a column apologizing for it. Michelle's remarks were not so strongly worded, though, and the heated atmosphere of the campaign has largely dissipated.

However, some other comments she made should somewhat placate Trump supporters, though, if indeed they were listening.

We want the sitting president to be successful because we live in this country. He is our commander in chief, he was voted in.

His success, of course, is the country's success — even if Michelle believes that he was voted in by women ignoring their authentic selves.