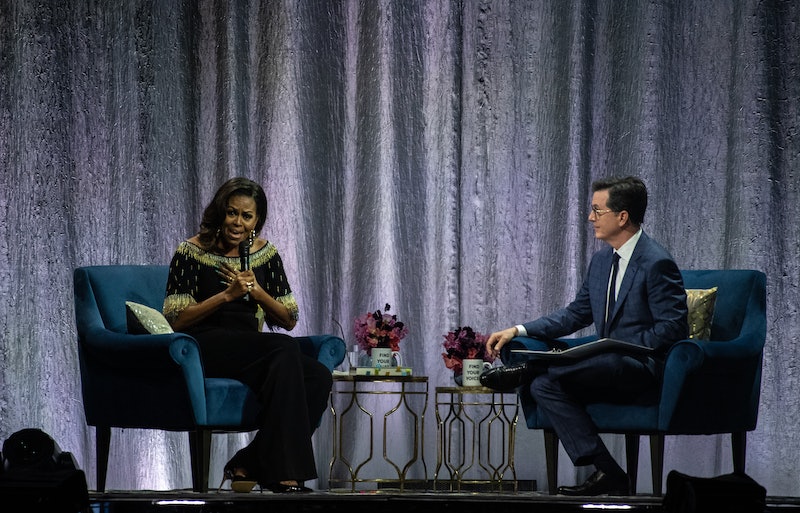 When Barack and Michelle Obama greeted the incoming occupants of the White House on President Donald Trump's inauguration day in January of 2017, their interactions appeared cordial. According to the former first lady, however, there was a lot more going on beneath the surface. At an event in Nashville with Stephen Colbert, Michelle Obama discussed her family's last day in the White House — and apparently it was pretty emotionally charged.

“All the transition happens in the matter of a day … so that last day's busy," Obama told Colbert, according to USA Today. "But, of course, when you have kids, what do they want? A sleepover. You realize all their friends had grown up there, too.”

Obama talked about Malia and Sasha Obama's big sleepover as early as spring 2017, per Teen Vogue, referring to it as something "so normal" for them to want. According to what she told Colbert, though, it had a tough ending — especially after the girls were “a little too slow” to get up.

“Everybody’s crying because it’s the last day and it’s emotional,” Obama said, as USA Today wrote. “We’re saying goodbye and people are crying and the staff’s crying and I’m thinking I gotta get myself together because if I walk out that door in tears they’re going to think I’m crying because of the Trumps.”

Obama has talked about the difficulties of raising Malia and Sasha in the White House before, but the scene on the last day shows that it wasn't all difficulties. The girls spent eight of their formative years living in that house, which means that their parents spent eight years watching their daughters grow up there — as they played their other roles as president and first lady. Barack also spoke about this element of his presidency, soon before he left office.

"When you open a door and they're in their pajamas and they're, you know, wrestling with you and asking you, you know, to read to them and stuff, you know it starts feeling like home pretty quick," he told ABC News' George Stephanopoulos in January 2017. "It feels even more like home now because you have all these memories that were formed watching your kids grow up."

Back in Nashville with Colbert, Obama talked about another aspect of raising her daughters that was more difficult in the White House: instilling in them a sense of personal responsibility when it came to doing household chores.

“I had to beg the housekeepers … these girls have to learn how to clean their own rooms and make their beds and do their laundry,” she said, according to USA Today. “Because they will not live here forever and I am not raising kids that don’t know how to make a bed.”

This talk was one Obama's last stop promoting her internationally bestselling book, Becoming. Even though she's repeatedly promised that she'll never make her own presidential run, USA Today wrote that even at this last stop, her audience still asked her to change her mind.

“If you read the book," Obama said, "You will know why I will never be president.”