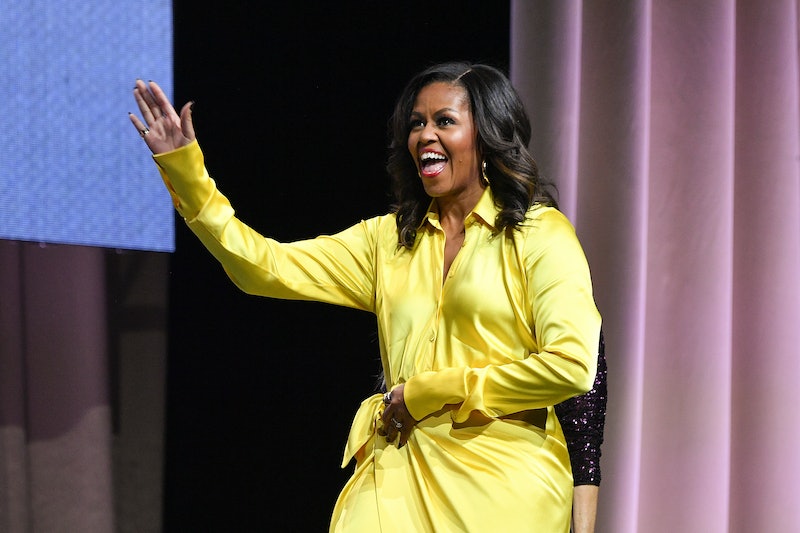 Just when you thought Becoming couldn't get any more popular, Michelle Obama goes and outdoes herself. The New York Times reported Friday that Michelle Obama's memoir is the #1 book in SO. MANY. COUNTRIES. right now. Even for a political memoir, that's a huge deal.

Becoming has been setting records since it first hit store shelves on Nov. 13. First day sales of Michelle Obama's memoir totalled 725,000 copies across all editions in the U.S. and Canada, making it Penguin Random House's top single-day seller. Two weeks later, Becoming had earned its spot as the bestselling book of 2018, outpacing Michael Wolff's January release, Fire and Fury: Inside the Trump White House, with more than 2,000,000 units sold. Sales numbers for Becoming surpassed 3,000,000 by Dec. 11. Across the pond, Michelle Obama's memoir was the UK's Christmas No. 1 — the best-selling book in the final shopping week before the Dec. 25 holiday.

On Friday, New York Times reported that Becoming was steadily moving copies around the globe. Translated into 23 languages, the book holds the No. 1 spots on bestseller lists in Canada, Denmark, England, Finland, Germany, Norway, Portugal, and Singapore, as well as at home in the U.S.

On bestseller lists around the world, Michelle Obama's memoir is at No. 3 in Ireland; No. 4 in France, South Korea, and Spain; No. 9 in Italy; No. 14 in Poland; and No. 20 in Czechia. The New York Times also lists several countries, including South Africa and Brazil, in which Becoming is reportedly popular, but does not provide the book's rankings on bestseller lists in those nations. Becoming's English Kindle edition is a No. 1 bestseller on Amazon in Japan and in China.

In addition to its inclusion on Oprah's Book Club list and a glowing review by the not-at-all-biased Barack Obama, Michelle Obama's memoir has also inspired a class curriculum. Written by Lauren Christine Mims, the former assistant director of the White House Initiative on Educational Excellence for African Americans, the "curriculum will make space for black girls to thrive in a world that often seems to try and deny their humanity." Students exposed to the curriculum will read Becoming and watch films with young, black, female leads, and will talk about the unique forms of bullying, harassment, and intimidation that black girls experience in school and other spaces.

Michelle Obama's Becoming is available today at your favorite bookseller.