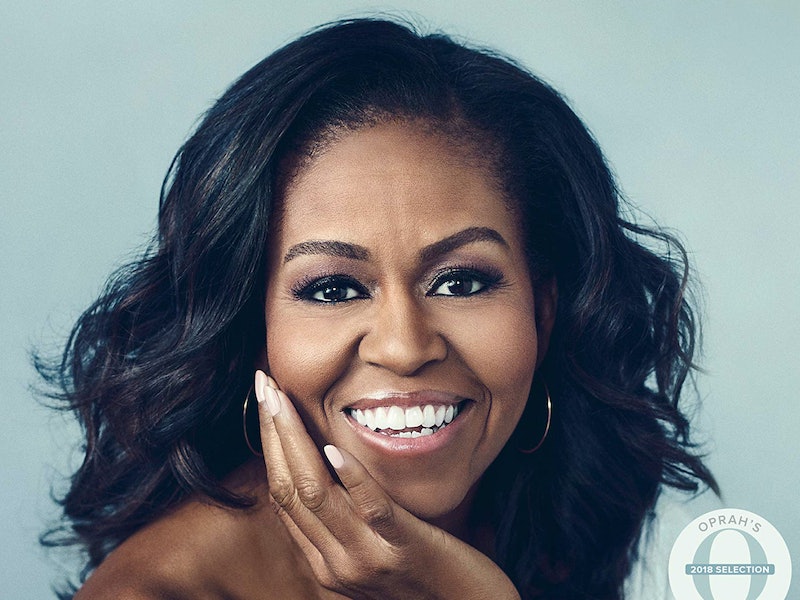 One summer, about a year into her relationship with Barack Obama, Michelle Robinson began keeping a journal for the first time in her life, as detailed in her new memoir. "I'd write a few entires in a single week and then lay the journal down for a month or sometimes more. I was not, by nature, introspective," she shares. It seems strange to hear her say so, considering her new book Becoming, out now, is an honest, raw, and exacting examination of her own journey to claim her power as a lawyer, a mother, and ultimately, as First Lady of the United States.

Becoming, the latest selection for Oprah Winfrey's Book Club and arguably the biggest book of 2018, is a behind-the-scenes look at the White House from the perspective of someone who wasn't terribly involved in the political side of things. You won't learn about the intricacies of the plan to assassinate Osama Bin Ladin, but you will learn about the immediate aftermath, when Michelle Obama learned the news from her husband. You won't hear about the lead-up to the Supreme Court decision that legalized same-sex marriage, but you will read about the night of the decision, when Michelle and Malia Obama snuck out of the White House to see the facade of the building illuminated by rainbow lights. And maybe you won't read too much about how Michelle Obama really feels about the man who succeeded her husband in the Oval Office, but you learn a lot about her, and her family, and their unique purview as Americans who love their country and have hope that better days are ahead. Instead of trying to tell a full, expansive history of her husband's eight years in office, Michelle Obama instead turns the focus on herself — how she felt through it all, how she reacted to the strange, wild, and wondrous moments of their journey, and how she plans to forge forward.

Becoming is available for sale now, but here are a few of the key takeaways for women (I'd take out "for women," to make sure we include men and nonbinary individuals reading.) reading the book: