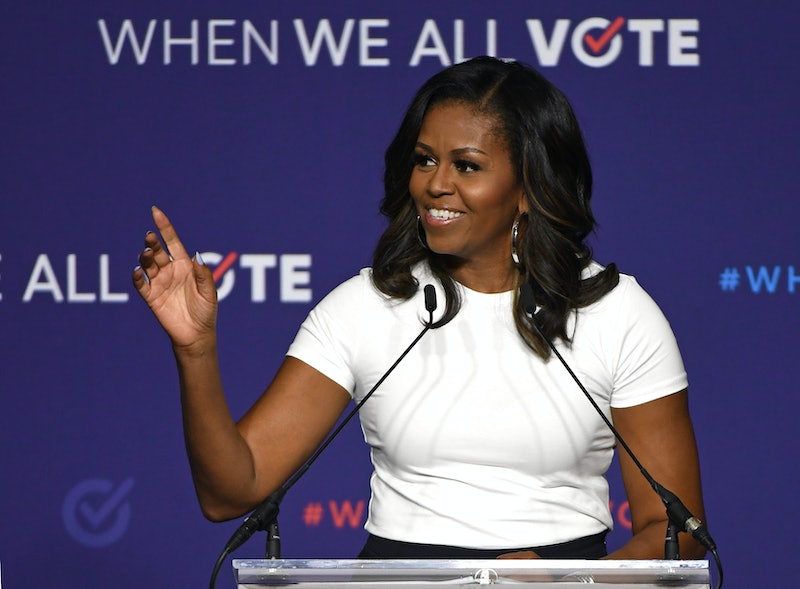 Miscarriages affect more women than you probably know, but not everyone readily talks about them. And Good Morning America on Friday, Michelle Obama revealed that she’d suffered from a miscarriage in the past and conceived her daughters through in vitro fertilization (IVF). She elaborates on this in her upcoming book, Becoming, which comes out on November 13.

Meanwhile, throughout her interview with Robin Roberts, the former first lady explained her struggles and the importance of talking to others about miscarriages. “I felt like I failed because I didn’t know how common miscarriages were because we don’t talk about them,” Obama told Roberts. “We sit in our own pain, thinking that somehow we’re broken.” Obama said that’s one of the reasons she thinks it’s important to talk to young mothers about the fact that miscarriages happen.

Her entire conversation with Roberts, “Becoming Michelle: A First Lady’s Journey with Robin Roberts,” will air during a prime-time ABC News special on Sunday, November 11, at 9 p.m. EST. In the special, they discuss several topics from Obama’s memoir, Becoming, which includes motherhood, miscarriage, and IVF. In her interview with Roberts, Obama said that when she was 34 and 35, she realized she had to do IVF. She told Roberts “the biological clock is real” and “egg production is limited.” Now, Obama’s daughters are 17 and 20, so the IVF worked. However, the rates of miscarriage are still significant.

How Common Are Miscarriages?

Of course, Obama is not alone in her IVF path. In fact, according to the Centers for Disease Control and Prevention (CDC), fertility rates across the U.S. are declining. “Sadly, miscarriage is very common,” Dr. Zev Williams, MD, PhD, director of Columbia University Fertility Center, tells Bustle. “In fact, miscarriages are the most common complication in pregnancy, occurring in at least 20 percent of all pregnancies.” He says that although they are more common in women over the age of 38, they can — and do — occur in women of all ages.

Dr. Kecia Gaither, MD, a double board-certified physician in OB/GYN and Maternal Fetal Medicine, says they happen for several different reasons. “At times, they may occur prior to the woman even knowing she is pregnant, and miscarriages can have multiple causes,” she tells Bustle. “However, the majority of miscarriages are due to aneuploidy — or abnormal chromosomes; as a woman ages, there is an increased risk of aneuploidy.”

Dr. Bat-Sheva Lerner Maslow, reproductive endocrinologist at Expect Fertility, tells Bustle that the risk of miscarrying increases with age because of increased chromosomal problems in eggs as women age. “One large-scale study of over one million pregnancies in Scandinavia showed that the risk of miscarriage for women age 25-29 was 11.9 percent; 30-34, 15 percent; 35-39, 24.6% percent; 40-44, 51 percent; and 45 or more, 93.4 percent,” she says.

Miscarriages Are Still A Stigmatized Topic, But Shouldn’t Be

“I think it’s the worst thing that we do to each other as women, not share the truth about our bodies and how they work,” Obama told Roberts. Dr. Williams, too, says that pregnancy loss, and infertility as well, remain very taboo topics that are rarely discussed publicly.

"It isn’t spoken about enough — there still remains a stigma, which makes women feel alone and broken."

“I think that at least part of the reason that pregnancy loss is still stigmatized is that there is a very unfortunate confluence of misperceptions — that pregnancy loss is rare and that it is due to something the woman did wrong — that can result in feelings of self-blame and guilt,” he says. But he notes that the reality is, pregnancy loss is very common and almost never due to something that the woman did wrong. “That’s part of what makes what Michelle Obama did so courageous, important, and helpful, for the millions of women and couples who have also struggled with pregnancy loss and infertility; it helps make others who have had a miscarriage feel less isolated and alone,” he says.

Dr. Maslow agrees. “It isn’t spoken about enough — there still remains a stigma, which makes women feel alone and broken,” she says. “Women often don’t realize how many of their friends have suffered with miscarriage until they’ve had one themselves, and then others come out of the woodwork.”

She says that while there has been a lot of progress in destigmatizing miscarriage, there’s still a long way to go. “Recognizing that pregnancy isn’t always as glamorous as Hollywood depicts — and the amount of pregnancies that miscarry in the first trimester — is a good first step in helping women recognize that they didn’t do something to cause the miscarriage and that they aren’t the only ones experiencing it.”

More like this
How Getting An Abortion Has Changed From The ’60s Through Today
By Amanda Chatel
6 Abortion Advocates To Follow On TikTok
By Sara Youngblood Gregory
The UK Abortion Laws In 2022, Explained
By Sophie McEvoy
How To Protect Your Digital Privacy If You Need An Abortion Post-Roe
By Kaitlyn Wylde
Get Even More From Bustle — Sign Up For The Newsletter