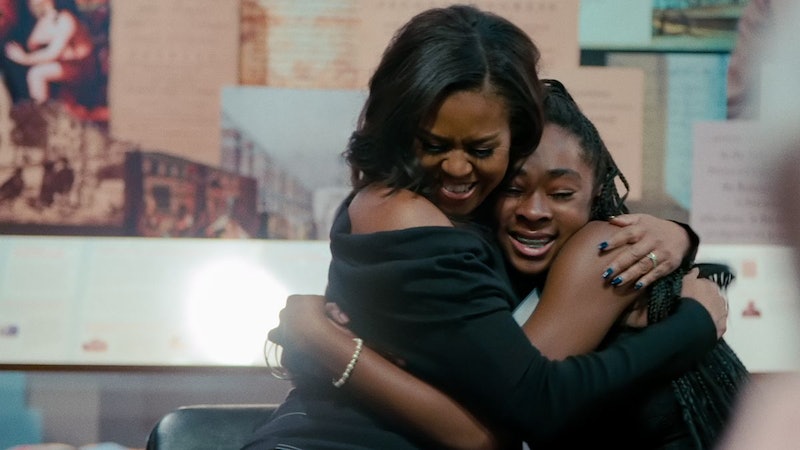 Ever since she first settled into the White House in 2008 as first lady, Michelle Obama has been constantly tailed by a group of Secret Service agents, her chief of staff, and various other members of her team. So when filmmaker and cinematographer Nadia Hallgren was tasked with directing Netflix’s Becoming, a documentary about her nationwide book tour (and in secret, no less), Hallgren knew she had her work cut out for her getting up close and personal with the former first lady.

“I really wanted audiences to feel what it felt like to ride shotgun with Mrs. Obama,” Hallgren tells Bustle of her initial conceit. To accomplish this, Hallgren had to be scrappy. The pace of the first two weeks of shooting was very hard for her, but soon after she found her rhythm shooting with a very small crew, sometimes even filming Obama by herself to capture behind-the-scenes moments. But one of the biggest challenges became keeping up with Michelle Obama, period.

“I had to get used to the sheer pace in which she moves, [as well as] that she’s always flanked by Secret Service,” Hallgren says of trying to capture the intimate moments of someone who’s virtually never alone. “[For a while] I was like, ‘How am I gonna do this? How am I gonna keep up?’”

Hallgren soon learned that it would all come down to logistics. Especially when it came to her vision of riding shotgun with Obama, which required weeks of advanced planning and stages of approval. “[When the day came] I went up to her car and there’s an agent standing outside of the door, and I’m like, ‘Good morning! I will be riding with Mrs. Obama today.’ He kind of looked at me with this puzzled look in his eyes,” Hallgren recalls. The agent got on his headset while Hallgren shifted around nervously with camera in hand. “He turns around and he’s like, ‘I’ve never seen this in all my years working for Mrs. Obama, somebody being able to ride with her in the car and film her.’”

But Hallgren’s commitment to keeping up with Obama is what gives audiences a revelaing look at who she really is, outside of her role as the former FLOTUS. It also made some of Hallgren’s favorite moments of the film possible. “[I loved when] she shared a very personal story about what it felt like when gay marriage was passed. [The Obamas] were sitting at their dinner table and they saw their lights come on [celebrating the ruling],” she says. “[But she had a real] desire to be able to [go outside and] participate in a celebration that was happening outside of her door.” It’s in these revelations that Hallgren creates a portrait of the fast-paced figure when she finally slows down, and gets to just be Michelle.