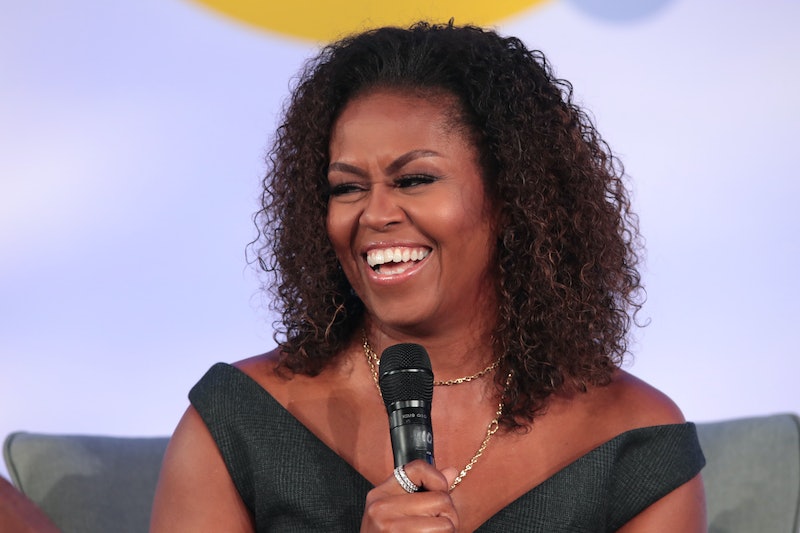 Class is in session: Former First Lady Michelle Obama will launch a new IGTV series about first-year college students. In partnership with ATTN, “A Year of Firsts” will follow four students as they navigate the ups and downs of their freshman year in higher education. Obama announced the six-episode series, set to debut in mid-January and conclude in June, on Instagram on Tuesday with a video that introduced the students.

"The first year of college is exciting, but also a little nerve-racking,” Obama captioned the clip. “As a first-generation college student myself, I know how intimidating it can be to try to navigate through a new place and make new friends, all while trying to figure out who you are and who you want to be."

She continued, "That's why I'm so excited that @reachhigher is teaming up with @attndotcom to share the stories of four first-year college students: Robert, Linette, Regan, and Haseeb. Can't wait for you all to meet them and learn more about what taking that leap really feels like, day in and day out."

“A Year of Firsts” is produced in partnership with the former first lady’s Reach Higher initiative, an organization that aims to inspire students to complete their educations. In the clip, viewers are introduced to the four students who hail from Washington D.C., Alabama, North Dakota, and California as they document issues such as academic stress, finances, and physical and mental health.

“As Mrs. Obama highlights in each episode, there are many hidden challenges to making it through college,” ATTN co-founder Matthew Segal said in the official blog post. “This series will meet many students where they live — on Instagram — and share candid perspectives about how to overcome barriers. We’re thrilled to be partnering with Mrs. Obama and Reach Higher to engage and inspire students to invest in themselves through higher education."

Obama has been a longtime champion of higher education. At Reach Higher’s annual Beating the Odds Summit to support first-gen students in July 2019, she offered some advice to students at Howard University who were the first of their families to attend college. "It’s going to be okay as long as you don’t quit," she said, per Good Morning America. “There are lesser people than you who have gone further."

Of being at “every powerful table there is to be at,” Obama added, “Let me tell you, they’re not smarter than you.” She continued, “You are faster, quicker, smarter, sharper. Yes you have to be, but they are no smarter than you, because trust me, they were no smarter than me. And I’ve lived long enough to see that truth."

Tune into “A Year of Firsts” on Instagram TV in mid-January.

More like this
This Pre-'Love Island' Video Of Olivia & Zara Together Changes Everything
By Bustle UK
Twitter Can’t Make Up Its Mind About Ekin-Su’s 'Dancing On Ice' Skate-Off
By Sophie McEvoy
Twitter Is Saying The Same Thing About Ekin-Su’s 'Dancing On Ice' Debut
By Sophie McEvoy
Ashamed Of Your Screen Time Stats? Here's How To Change That
By Alexis Morillo
Get Even More From Bustle — Sign Up For The Newsletter
From hair trends to relationship advice, our daily newsletter has everything you need to sound like a person who’s on TikTok, even if you aren’t.