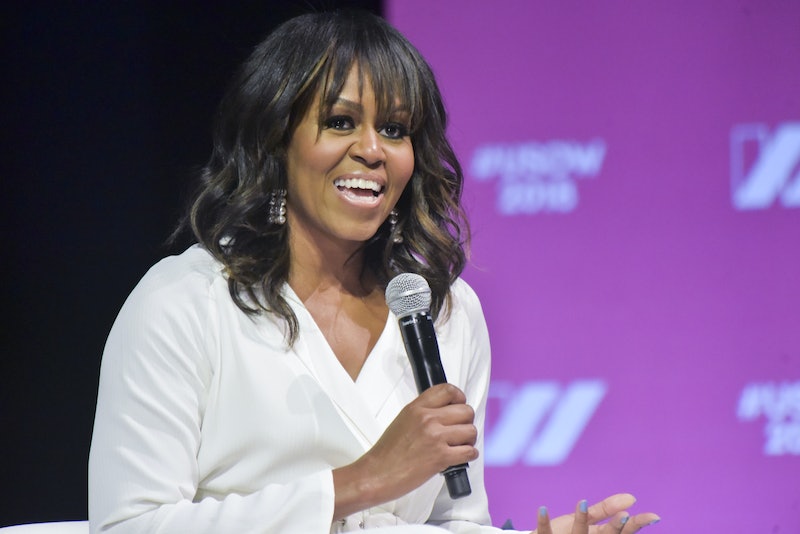 On Saturday, the most recent former first lady addressed a group of women at the annual United State of Women Summit in Los Angeles, where she was the keynote speaker. During her talk, Michelle Obama reflected on 2016, and suggested that American women, in particular, need to reevaluate how they view women leaders and men leaders.

"In light of this last election, I'm concerned about us as women and how we think," Obama said on Saturday. "What is going on in our heads where we let that happen, you know?"

As is the norm, Obama did not reference President Trump by name, though she did speak in depth about the election that put him on office. She lamented that so many women had chosen to support him, in lieu of Clinton, who she described as "the most qualified" candidate.

"When the most qualified person running was a woman, and look what we did instead, I mean that says something about where we are," Obama said. Although Clinton received about 54 percent of her votes from women, according to exit polls, the majority of white women, overall, voted for Trump.

She also expressed frustration that men who make bad decisions can still come out on top. This, she said, wasn't generally the case for women.

"I wish that girls could fail as bad as men do and be OK," she said, "because let me tell you, watching men fail up — it is frustrating. It's frustrating to see a lot of men blow it and win. And we hold ourselves to these crazy, crazy standards."

If we, as women, are still suspicious of one another, if [we] still have this crazy, crazy bar for each other that we don't have for men, if we're still doing that today — if we're not comfortable with the notion that a woman could be our president — compared to what? We have to have that conversation with ourselves, as women. This isn't an external conversation. That's on us.

Obama was interviewed by Tracee Ellis Ross, who is an actress, comedian, and television host. The two reflected on the traditional expectations that are still placed on young girls today, despite the immense amount of progress that has been made toward gender equality.

"It's also a conversation of what are we asking women and men, or boys and girls, to dream of different things," Ross said to Obama. "We talk so much about empowering young girls, what is the conversation?"

Obama had a lot of thoughts about that question, in particular. Though messaging about gender-based, family-focused roles is starting to shift, she suggested that, once they hit a certain age, many women feel pressured or compelled to fall in line with traditional societal expectations.

"I still think that our girls are taught to be perfect," Obama said. She continued:

They still dream of weddings and the security of the Prince Charming coming to get them. I think we're working on it, I'm proud of what I hear from young girls, but i think that something happens when they get to that stage where you're supposed to be married and have kids.

"Missed it!" Ross interjected, to laughter.

The two women discussed a myriad of topics related to young women and feminist empowerment. When it comes to expectations about marriage and child rearing, Obama and Ross examined the interview host's own career — which has flourished, without starting a family in between projects.

Obama praised Ross for all of her accomplishments, but she acknowledged that many people probably express a version of pity for her when they find out she isn't married with children. "But still, societally, we kinda look at that and go 'oh, you poor thing.'" Ross said that Obama was right.

As is often the case, Obama spoke of feminism less in grand generalizations, but instead with a matter-of-fact practicality. And above all else, she emphasized the need for women to take agency in their own lives, as well as among each other.