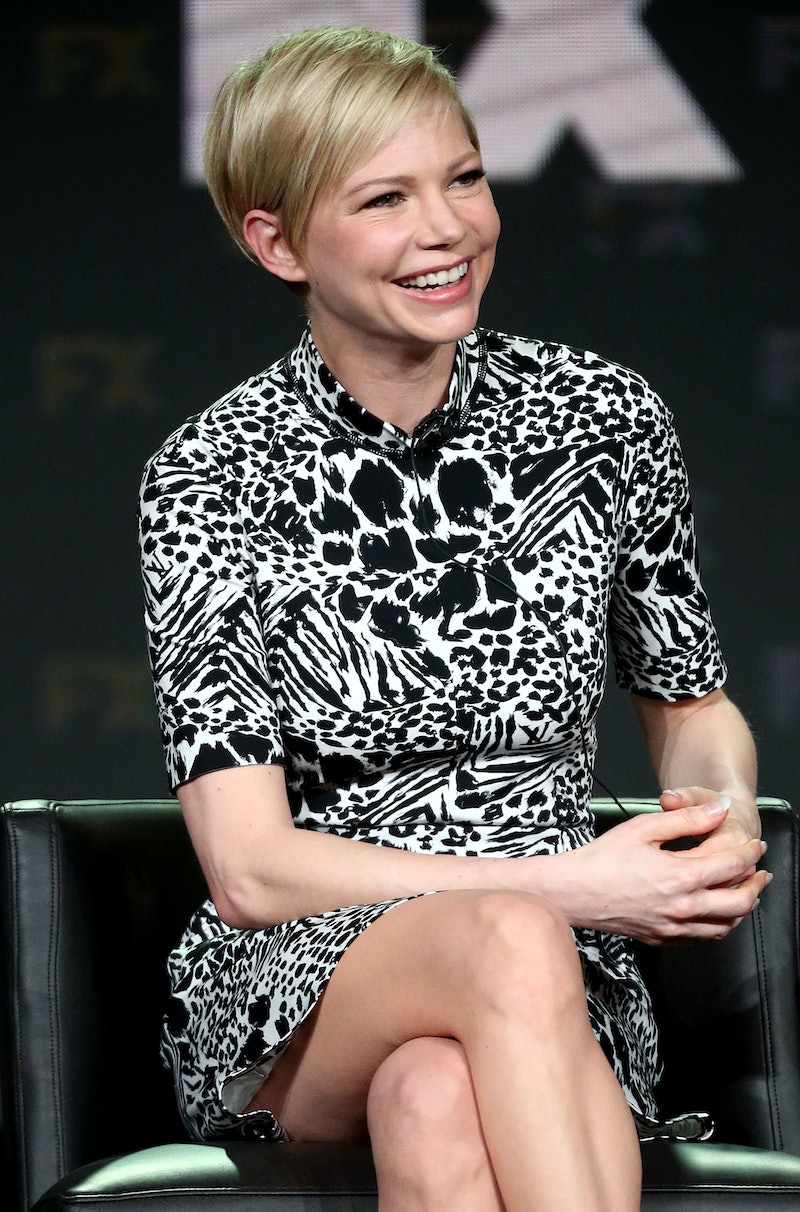 Michelle Williams has rocked a pixie cut since 2007, and has been sporting the short look ever since. It almost seems unnatural to imagine Williams without her Mia Farrow-esque pixie, but it looks like she's in the stages of growing it out now. Michelle Williams has a bob now, proving that the in between growout period doesn't have to be completely painful.

This isn't the first time that Williams has grown out her texturized pixie, so the actress is practically a pro at the grow-out stage. Every couple of years Williams grows out her tresses into a lob, but she always returns back to the pixie. On Aug. 6, while in New York City for the premiere of her latest film After the Wedding, Williams stepped out with a cheek-grazing bob. The new hairstyle had a flapper-like quality to it. Her hair was in its signature platinum blonde color, but the blunt bob was side parted and straightened into blunt perfection.

Williams paired the sleek bob with a silver Louis Vuitton scooter dress with delicate floral embroidery at the bust. The outfit was topped off with a pair of chrome platform heels.

Even though Williams' is a pro with growing out a short-cropped looks, that doesn't mean it's a total breeze for the actress. In 2013, Williams shared with E! News that she was growing out her pixie (again) and stressed that it was not an easy endeavor.

"I think I'm ready. It's on its way, slowly but surely," Williams said. "That's why I've stayed with short hair for so long. The mid-stage is insufferable. It's really hard on your self-esteem. I'm really happy to not have anything looming — except my hair. I'm really working on my hair growing out."

If you're currently in a growing-out stage and want to transition your length as flawlessly as Williams, then her stylist has some tips for you. In an interview with E! News, Heitkotter revealed that keeping your hair presentable during that stage is all about getting regular trims. Even if that feels counter-intuit

"I think it's important to have regular clean-ups during the growing-out process, to maintain some shape/style," Heitkotter told E! News. "Start growing most layers longer by just mainly trimming the bottom until you can cut your hair into a short bob...and then continue growing out from that point. Or for a more shagged style, just grow all the layers out evenly and maybe rock it with a shorter bang."

For those who are at a loss with how to style their growing out pixie cut, Heitkotter had some product tips. "I like to take a flat iron and lightly straighten out some of the ends throughout. Then use a dry texture spray (one of my go-tos is Oribe Dry Texture Spray) to give it some volume," Heitkotter said.

Williams makes growing out pixie cuts look painless. Let's see how long it takes before the actress cuts it back short.