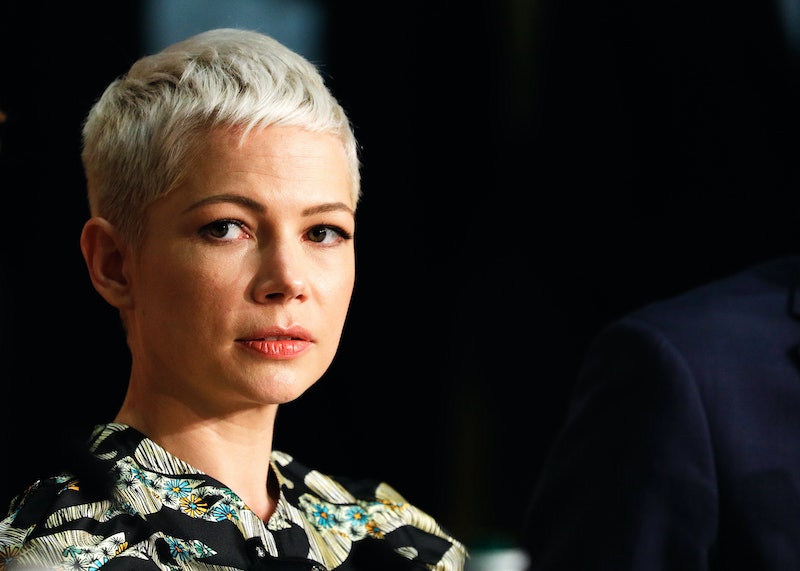 It seemed like there was a satisfying ending for the disparity in pay for the All The Money In The World re-shoots. But that was only the tip of the iceberg, because Michelle Williams and Mark Wahlberg's salaries were wildly different for the entire film. According to The Hollywood Reporter, who reports that they confirmed the news, Williams was paid just $625,000 to Wahlberg's $5 million, eight times less than his salary, even before the reshoots occurred. (Bustle reached out to both Sony and Williams' team for comment on these claims, but did not receive an immediate reply.) The alleged gap is significant, because the two are co-stars and receive equal screen time. But the difference is thrown into even starker contrast by the addition of awards season.

Williams received a Golden Globe nomination for her performance in the film and is expected to get an Oscar nod as well. Wahlberg, on the other hand, hasn't fared quite so well; his performance, while strong, hasn't generated any award buzz as of yet. And, sure, as The Hollywood Reporter points out, it's impossible to accurately determine during negotiations which of a movie's actors will shine brightest and unrealistic to expect them to be compensated accordingly. But what's not impossible is to predict who might bring in an Oscar-worthy performance, using the actors' career histories.

If those had been the metrics that All The Money In The World (film editing: Claire Simpson) was working with, you could have expected to see very different salary outcomes. Perhaps, if Mark Wahlberg had been nominated for Oscars eight times as frequently as Michelle Williams, their reported pay disparity would have made sense. But, in fact, the situation is nearly reversed: it's Williams who has received four times as many acting nominations as her male co-star, and far more recently.

Wahlberg received a Best Supporting Actor nod for The Departed in 2007, now over a decade ago. (He also received a Best Picture nomination for The Fighter in 2011, but that was in his capacity as a producer on the film.) In contrast, Williams has been nominated four times: for Brokeback Mountain in 2006, Blue Valentine in 2011, My Week with Marilyn in 2012, and Manchester by the Sea in 2017. She checks off boxes in seemingly limitless categories. Back-to-back nominations? Yup. As recently as last year? Check. In both the Best Supporting Actress and Best Actress categories? Mmhmm. Spread out over a decade? You betcha.

This is the kind of resume that should easily earn her equal billing to a male co-star like Mark Wahlberg — or conceivably even top billing, if this was a different world. But it isn't, quite yet. The fight is ongoing, but this is the middle, not the end. It's wonderful that there was so much backlash to the discovery that Wahlberg was paid 1,500 times more for the film's reshoots than Williams. And it's wonderful that he donated that $1.5 million to the Time's Up movement, and that his and Williams' reps kicked in $500,000 more. But these are bandages on a wound, and they don't address the larger issue.

The only way to address those concerns is through the steps that are being taken now toward open conversations about salaries — between groups of women, yes, but also between women and men. This is a goal that everyone should be working toward, in every industry, but Hollywood is just one of the most visible examples. The reshoot pay disparity is proof that it was simply a microcosm of a larger issue, and it can't be erased by a donation, no matter how generous. Williams was reportedly paid far less than her male co-star from the very beginning, and no one has provided an adequate reason for the rumored gap, if it's true.

We have to attack the roots of this issues with open dialogue, instead of just clipping away at the leaves with retroactive apologies that do more to dismiss the issue than address it. And hopefully, as The Hollywood Reporter emphasizes with the very headline of the piece ("Sharing Salaries: How Actresses Are Fighting Hollywood's Gender Pay Disparity With Transparency") that transparency will lead to outrage, which will lead to action, and will eventually lead to change.