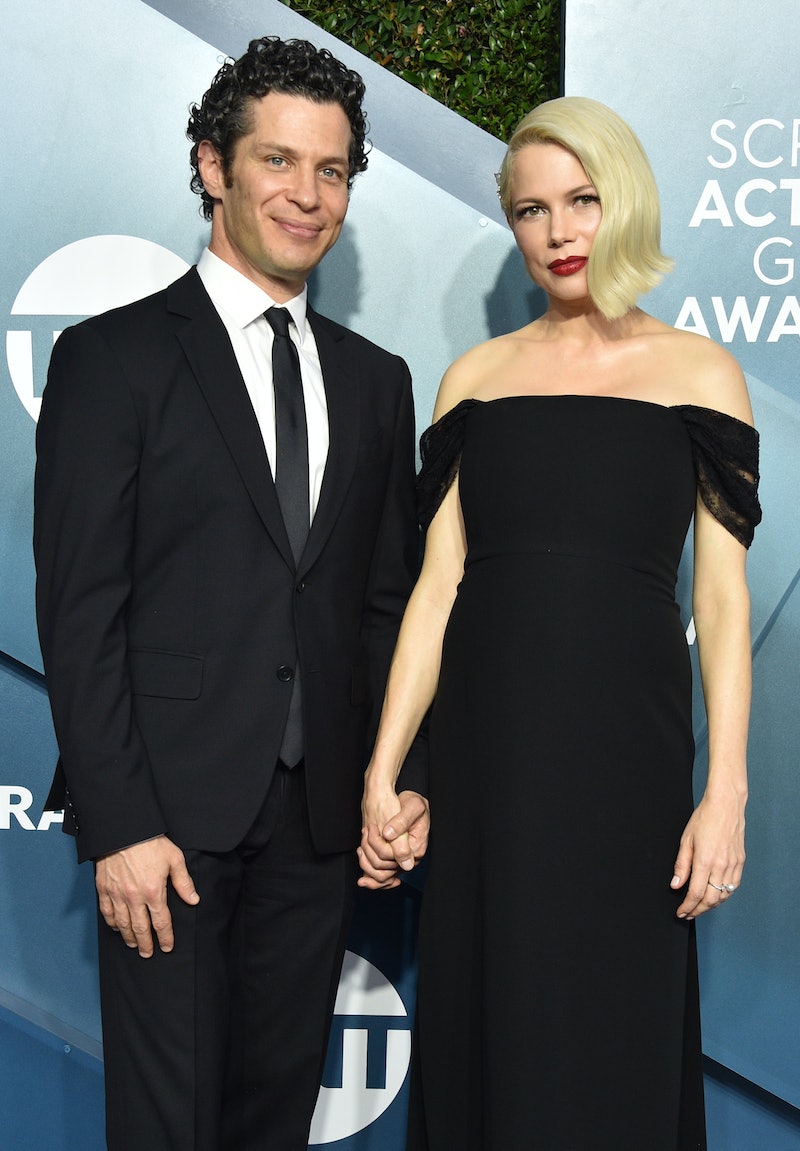 Congratulations are in order for this power couple. Michelle Williams and Thomas Kail reportedly got married in a secret ceremony, an anonymous source confirmed to Us Weekly. Williams and Kail, who are expecting their first child together, sparked marriage rumors earlier in the week after being photographed out on the street wearing bands on their wedding fingers, as per The Daily Mail. Bustle reached out to representatives for Williams and Kail for comment, but did not receive any immediate responses.

The couple's secret nuptials come just a few months after the engagement news. In December of 2019, Williams and Kail confirmed their engagement, and that the two were expecting a baby together. "They’re very happy and thrilled to be bringing a baby into the world," an unnamed source told Us Weekly. The source also reported that the couple hoped "to be wed" before the baby was born. Kail, a director best known Grease: Live and Fosse/Verdon, was reportedly matched up with Williams by her 14-year old daughter, Matilda, according to People. Williams was married indie musician Phil Elverum from 2018 to early 2019. Meanwhile, Kail split from actor Angela Christian in early 2019, as per Us Weekly.

Kail and Williams, who are typically private about their personal lives, don't seem likely to share a closer look at their wedding. But the couple have made several public appearances together in recent months. In February, the couple were photographed shopping in London, where Williams was shooting Venom 2, as per People. Anack in January, Williams and Kail walked the red carpet Golden Globe Awards, making it their first official appearance as a couple.

Matilda may have encouraged the couple to get-together, but Kail and Williams have collaborated on creative projects in the past. Kail directed Williams in Fosse/Verdon, for which she won an Emmy Award for Best Actress.

Given the couple's busy work schedule, and Williams' tendency to keep her romances to herself, it's no surprise that they would get married on their own terms. Hopefully they are enjoying their honeymoon, social distancing and all.

More like this
Keke Palmer Shares The Sex Of Her & Darius Jackson's Baby
By Jake Viswanath
Hilary Duff's Husband Matthew Koma Has Her Name Tattooed On His Butt
By Jake Viswanath and Stephanie Downs
Channing Tatum Calls Walking Away From Relationship With Jenna Dewan “Terrifying”
By Radhika Menon
Florence Pugh & Zach Braff Reflect On Their Relationship After Their Breakup
By Jake Viswanath
Get Even More From Bustle — Sign Up For The Newsletter
From hair trends to relationship advice, our daily newsletter has everything you need to sound like a person who’s on TikTok, even if you aren’t.