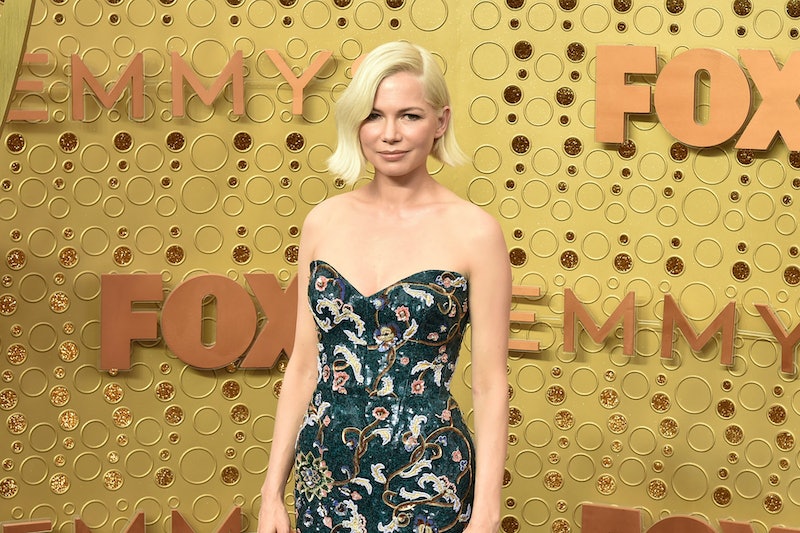 Fosse/Verdon gifted its star with more than just an Emmy award — it's also the project on which she met her future husband. Michelle Wiliams is pregnant and engaged to Hamilton director Thomas Kail, as reported by multiple outlets on Tuesday, Dec. 30. According to People, the pair met on the set of Fosse/Verdon, and reports of their new addition began surfacing after they were spotted shopping for baby clothes in London, where Williams is currently filming Venom 2. This will be the second marriage for both: Williams married indie musician Phil Elverum in 2018, while Kail was in a relationship with actor Angela Christian..

Kail — who has earned a Tony Award and a Kennedy Center Honor for his work on Hamilton, as well as an Emmy Award for directing Grease: Live! — directed Williams in her award-winning role as Broadway legend Gwen Verdon in Fosse/Verdon. In an August interview with IndieWire, Williams praised the director for supporting her and costar Sam Rockwell throughout the shoot, and encouraging them to ask for whatever they needed in order to best do their job.

Describing Kail as the "leader" of the project, Williams said, "Sam and I were scared and at the beginning and Tommy said to us, 'I will never leave you. I won’t leave you alone in anything you need. I’m going to be right there.' And that turned out to be really, really true." She continued, "that’s the thing that he offered and that’s in keeping with what I’m talking about, it’s this relentless positivity and this relentless 'We can do this' attitude."

Though Williams doesn't often speak about her love life with the press, the actor did speak to Vanity Fair in 2018 about falling in love again after the tragic death of her partner, Heath Ledger, in 2008. "I never gave up on love," Williams told the magazine, shortly after her secret wedding to Elverum in upstate New York. "I always say to Matilda [her daughter with Ledger], 'Your dad loved me before anybody thought I was talented, or pretty, or had nice clothes.'"

She also explained that though she is reluctant to speak publicly about her personal life, she has decided to be more open about her romances in the hopes that it will help other people who have also experienced loss. "I don't really want to talk about any of it," Williams explained. "But there's that tease, that lure, that's like, What if this helps somebody? What if somebody who has always journeyed in this way, who has struggled as much as I struggled, and looked as much as I looked, finds something that helps them?"

Despite describing her relationship with Elverum as "very sacred and very special," things ultimately didn't work out for him and Williams; the pair split in early 2019, according to People. "Michelle and Phil separated at the beginning of the year," a source told the outlet, adding that it was "an amicable spilt and they remain friends."

In the Vanity Fair interview, Williams said that there is one piece of advice she has for anyone in a relationship: don't settle. "Don't settle for something that feels like a prison, or is hard, or hurts you," Williams told the outlet. "If it doesn't feel like love, it's not love." Hopefully, the actor has finally found that love for herself in her new romance with Kail.