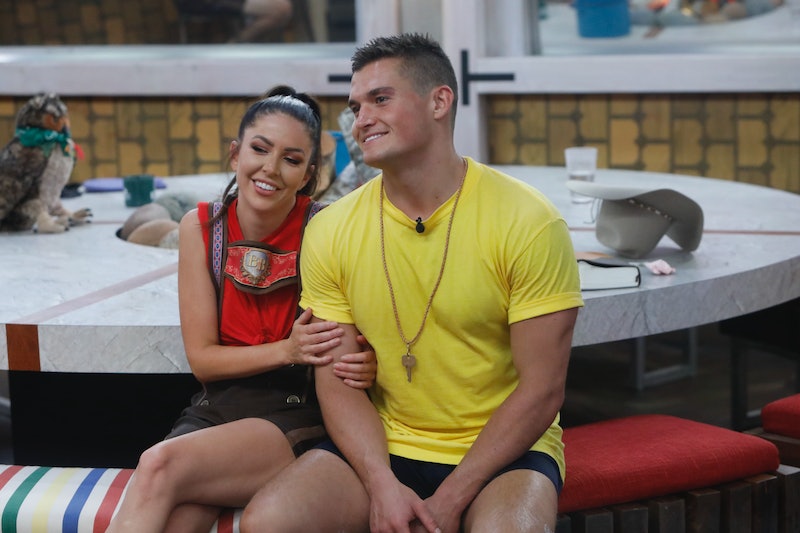 Fans all saw it coming, but now it's pretty much official. Thanks to Cliff and Nicole's decision to keep Holly instead of Tommy, there's gonna be a showmance in the final three, and Michie will probably win Big Brother 21. He wanted confetti to fall on his shoulders when he left the BB house, and now, he may well get it.

Cliff foolishly believed that Michie would honor their Final 2 deal, so he pushed Nicole into keeping Holly. He said he believed that Tommy would take Nicole to thhe Final 2, so he apparently thought that he had a better chance at winning with the showmance (???). Anyone who has watched even a minute of this show knows that showmances choose each other pretty much every time. Cliff probably would have been Michie's choice for Final 2 if Holly had been voted out, but alas. Now Michie casts the sole vote this week, and it's between Cliff and Holly. On the show, Cliff still thinks he has a chance, because he still thinks Michie will evict his girlfriend over Cliff. Wild. But Michie made it clear to Holly and to the Diary Room that he is voting to keep Holly.

The Veto ceremony takes place on Thursday, Sept. 19, so none of this is official yet. But there's a 99.9 percent chance that Michie is going to take himself off the block with the Veto and then cast the sole vote to evict Cliff. It will then be Nicole, Michie, and Holly in the Final 3.

Not evicting Holly when they could have hurt Nicole's chances as well. With Tommy there, either Tommy or Cliff could have taken Nicole to Final 2. Now, she'll be on her own. The only way she can get to Final 2 is if she wins two HoH competitions herself. Michie and Holly have a much better chance because they know they'll take each other. Only one of them has to win.

And, let's face it, Michie is a competition beast. He's won so many HoHs and Vetoes and even a luxury comp this summer. He will probably win the final HoH as well and he'll get to choose to take Holly with him to Final 2. Once he's sitting up there with Holly, the Jury will have to select a winner between the two of them.

Now, the Jury could decide to be bitter. All the people who Michie backstabbed or evicted could choose to give Holly the win out of spite. But this cast is also filled with superfans of the show who know that you have to recognize good game play. For example, Tommy was impressed with Michie's blatant lying, even though it got Tommy evicted. He could see the move for what it was — smart strategy.

Next to Holly, Michie has way more competition wins and has made way bigger moves in the game. He is the obvious winner. Holly did win a few of her own comps, but she didn't win as many or make as many plays. She mostly rode along with Michie as he climbed to the top, and that may ding her chances in the end. Of course, bitter Juries have bitten players like Michie in the butt before, so it's not a sure thing that he'll win. But of the remaining players, his odds seem the strongest.

As for Nicole? She's pretty much doomed unless she gets herself into the Final 2 on her own. If she does manage to do that, then she definitely deserves the win — just as long as she's smart enough not to take Michie with her.

More like this
Nicole & Chris Hinted They’re Still Together After 'Married At First Sight'
By Brad Witter
Here's Everyone Who Will Be Competing In 'Survivor' Season 44
By Brad Witter
Zach Addressed His "Boring Bachelor Energy" After His Group Date With Latto
By Grace Wehniainen
Megan Mullally & Nick Offerman’s Relationship Includes Several Collaborations
By Caitlin Gallagher and Brad Witter
Get Even More From Bustle — Sign Up For The Newsletter
From hair trends to relationship advice, our daily newsletter has everything you need to sound like a person who’s on TikTok, even if you aren’t.