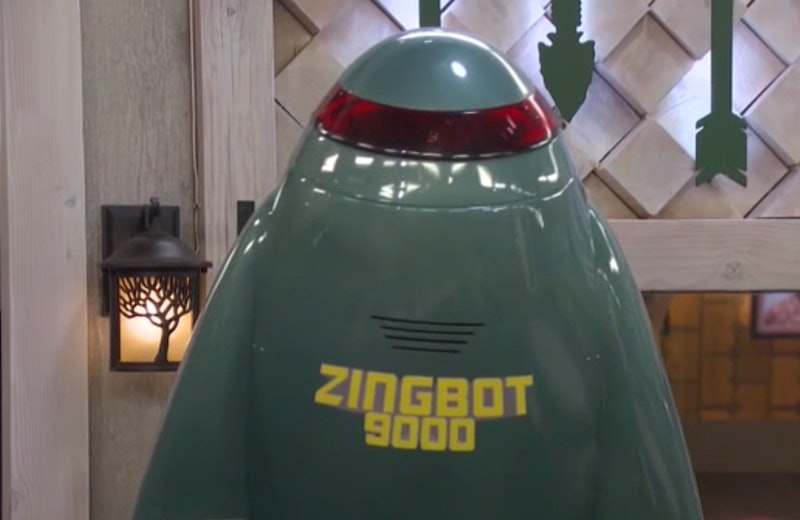 Prank Week is still going strong on Big Brother, and there was no better guest to host this week's Veto than the biggest BB prankster of all. Zingbot came to Big Brother 21 for Prank Week and handed out some serious burns to all of the remaining houseguests. It's kind of a big deal to make it far enough in the game to get roasted by Zingbot, so the houseguests were really excited to see him. And Zingbot most certainly did not come to play with this year's zings for the BB21 contestants. In case you missed one, or you just want to relive Michie getting called a douchebag, here's the rundown of everything Zingbot said to each houseguest.

To start, Zingbot zinged the whole group by telling them, "I've visited the Big Brother house a lot, and, I have to say, this is the biggest group of [expletive] losers I've ever seen." The show bleeped whatever word Zingbot said before losers, but the houseguests got a big kick out of Zingbot cussing. He was there to roast them, and he was clearly not afraid to say what he had to say.

Tommy's zing was: "With all your constant singing and dancing this summer, you remind me of my favorite musical: Little Shop of Attention Whores." Tommy retorted in the DR later, "I am not an attention whore," while doing the full-on splits in the DR chair. So he certainly had some fun with his zing.

When it came time to zing Holly, Zingbot almost made it about Nicole at first. "Nicole, you say you're afraid of birds... but you've been living with an old buzzard all season named Holly." On the feeds, Holly was pretty upset about her zing, thinking it meant she was a scavenger of leftovers (perhaps of Michie, who was with Kat on the show before he was with Holly), but Michie seemed to think on the show that it had to do with how Holly was older than him.

Nicole's actual zing was: "It must be tough for you in the Big Brother house with no friends, no boyfriend, and no contact with the outside world — actually, you must feel right at home." Ouch. Hopefully Nicole was too excited about Zingbot being there to be too offended. About his arrival, she excitedly said in the DR, "As a Big Brother mega fan, I cannot believe I'm in the presence of Zingbot."

Cliff's zing was a little below the belt as well, with Zingbot first making it sound like he was talking about plus size model Jessica. "There is one houseguest this summer who is very voluptuous, and, if you don't mind me saying, quite busty. Pleased to finally meet you, Cliff," Zingbot said. The robot has mocked contestants for their weight before, and it really is just never cool.

For Jessica's actual zing, she was zinged for her low-lying floater game. "With the game you're playing this summer, fans are already planning a convention in your honor," Zingbot intoned. "They're calling it snoozefest."

For Nick, Zingbot gave him a present of a bowl — because Nick kinda had a bowl haircut when he started this game. "Time for a new haircut," Zingbot told him.

When Zingbot moved on to Christie, he skipped anything having to do with her manifesting, paranoia, or near-constant crying, which disappointed Tommy. Instead, he made fun of her loud chewing. "Christie, wow, you sure got loud on Taco Tuesday. I don't mean your fighting, I mean your chewing." He then added, "Manifest—zing," which was a nice punny touch.

Zingbot really laid it on thick for his Michie zing, saying what perhaps some non-Michie fans only wish they could. "Hello, we haven't met yet," Zingbot said. "What should I call you? Jackson, Michie, or pompous douchebag?"

You never know with Zingbot whether you're gonna get a lowkey zing about your chewing or a below the belt comment about your weight or a completely devastating callout. That's why they say expect the unexpected on this show.