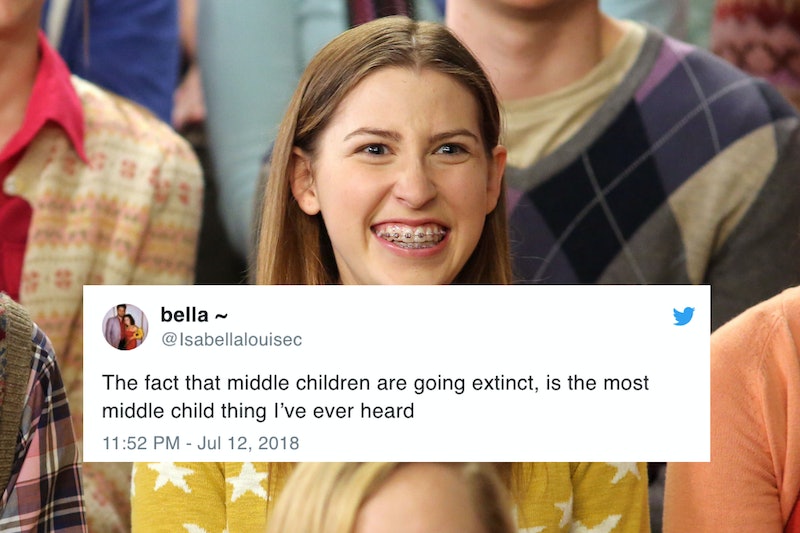 The July 9 issue of New York Magazine features a piece titled "The Extinction of the Middle Child." In the same way a listicle about middle children is bound to get middle children talking — the New York Mag piece itself mentions a BuzzFeed one called “19 Things All Middle Children Know Too Well” — the article immediately got people talking. Tweets from middle children about the story show just how much it resonated with them. The tweets also feature a lot of anecdotes about being ignored.

In the story, author Adam Sternbergh writes about how the number of middle children is declining along with the total number of children women are having on average. Sternbergh points to a 1976 study from the Pew Research Center that showed that at the end of her childbearing years, the average mother had birthed more than three children. "Back then," Sternbergh writes, "40 percent of mothers between 40 and 44 had four or more children. Twenty-five percent had three kids; 24 percent had two; and 11 percent had one." Nowadays, that's basically reversed, with almost two-thirds of women with kids having one or two children.

Of course, there are numerous reasons for this change — the cost of living, couples waiting longer to have kids, people thinking about the future of the planet — which Sternbergh mentions in his piece. Plus, the world doesn't exactly need people to be reproducing in higher numbers. But that doesn't mean that middle kids aren't mourning the loss of their kind, or at least reveling in the chance to see themselves and their positive attributes written about at length. They're finally getting some respect.

They Can Really Relate

The piece points out that because of the position they're in, middle kids are often empathetic or peacemakers. Also, they tend to be attention-seeking, because they are placed between overachieving firstborns and the baby of the family, who gets a lot of attention.

Or Maybe They're Just Sneakier...

This middle child might be spreading a secret middle children who are still actual children don't want you to know.

People Got More Specific About The Boxes They Fit Into

The article notes that the idea that middle children have certain traits could be spurred on by the Barnum Effect, which "describes our tendency to recognize and agree with personality traits that seem to be tailored specifically for us, even when they’re general enough to apply to a large group." It can also apply to astrology, so these tweeters are either being swayed by the Barnum Effect, or really were dealt a difficult hand with their middle-child-left-handed-Virgo/Pieces-ness — depending on what you believe, of course.

Who will make fun of middle children when the middle children are gone? So many jokes will be lost. Will future generations even understand what's happening on The Brady Bunch?

The Article Continued A "Millennials Are Killing Things" Trend

The article isn't "Boo, Millennials!" in the way a lot of other ones have been, but, technically, yes, millennials are helping kill off middle children. (Not literally!!!)

On the one hand, it's a joke. On the other, in a totally different sense, it's actually true.

And Then There Was This

Is it a direct response to the article? Who cares. It's hilarious and actually does speak to the ideas of firstborns and middle children presented in the story.

While middle children may be dying off, their legacy of self-deprecating humor will live on.

More like this
On TikTok, Tinned Fish Date Night Is The Latest Viral Food Obsession
By Emma Carey
TikTok's Butter Board Might Be The New Cheese Plate
By Emma Carey
8 Completely Unserious Tips To Make Your Cuffing Season A Success
By Ginny Hogan
Why TikTok Is Flooded With Controversial Videos About "Pick Me Girls"
By Courtney Young
Get Even More From Bustle — Sign Up For The Newsletter