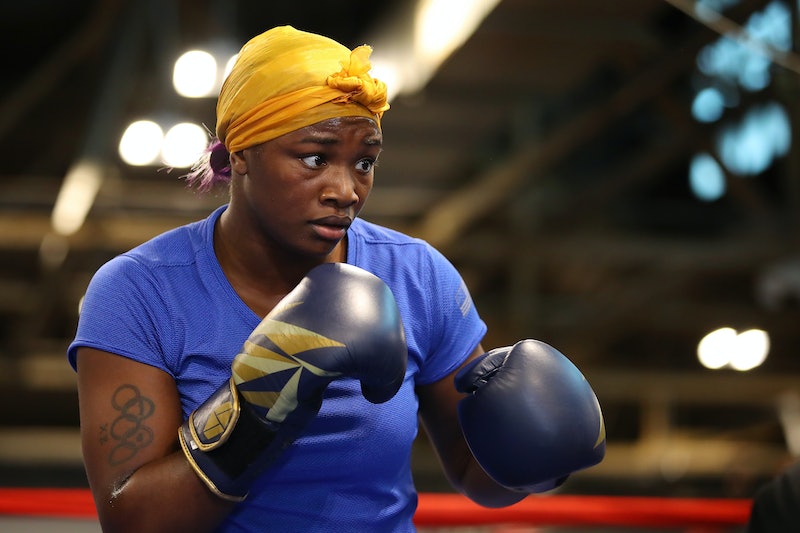 As a two-time Olympic Gold Medalist, and a Middleweight World Champion, Claressa Shields is one of the most accomplished amateur boxers of our time, period. But her drive to be the best fighter — among men and women — and go down in history very much stems from her upbringing. As she grew up in Flint, Michigan, her father's love of boxing soon became her own. The poverty of her neighborhood pushed her forward as she strived to achieve success, and now she's sharing that winning spirit with family and friends. Bustle spoke with Shields about how her family, friends, and neighborhood inspired her to be the boxer she is today.

Growing up in Flint, Michigan, it was my family and my community that influenced me to start boxing and become successful in my sport. My dad used to box when he was growing up, and it was what he loved doing the most. He told me he wished he didn't go to prison, and had stuck to what he was passionate about. I started boxing because I wanted to do it for him, so he could live some of his life through me.

Really, it wasn't something that I had interest in, it was more of something I wanted to do for him. Then I started, and just fell in love with working out. I fell in love with punching people and being considered a great fighter. It became my passion at a young age and I always wanted to get better, get stronger, and be faster. Then I found out about the junior Olympics and then the official Olympics — it made me want to go harder and be better at boxing. So I've had a love of boxing, since that first day I walked in the gym.

My grandmother also had a huge influence on my boxing career — she had a huge influence on my life, period. Outside of boxing, she was my protecter, my teacher, and my disciplinarian. She taught me how to be tough. She also helped me express myself because I had a speech impediment growing up. She taught me about the importance of family, and was always preaching to me and giving me great advice. I may not have understood it then, but I definitely understand it now.

At first, she didn't really take my boxing that seriously. As my protector, she would come down to the gym every now and then, and she would just sit and watch. I remember I had a hard day at the gym once . She said, "Coco, what's wrong?" (That's my nickname.) I was upset and I didn't really want to talk about it, so she wrote me a poem called "Coco, why you so blue?" And I just laughed and she said to me, "Coco, whatever you do, keep boxing, no matter how hard it gets. You keep boxing, you keep listening to your coach and, and you're going to be something."

My mother also had a huge impact on me. Even though my mom struggled with alcohol misuse, she taught me a lot by example. When she was drinking, she showed me what excessive drinking can do to you. I saw how drinking made her act, and I saw how it messed up her life. That's why I tell myself now, I'm not going to drink. Maybe if I had a parent that was not doing what she was doing, I might have had to learn it the hard way. My mom is a lot better now, and I'm so proud of her. But I learned from seeing her do it. So she was a role model, not in the best way, but she definitely was a role model.

Being born and raised in one of the worst parts of Flint helped me be tough. Physically, I had to learn how to defend myself, but mentally, the negativity helped me learn to pick my battles. Sometimes it was time to fight, and sometimes it was time to walk away; there were times to talk and times to be quiet. I learned growing up that not everything deserves a reaction. Give more energy to positive things than to negative things and do what you have to do to make yourself successful.

Through my success, I hope to influence my community, too. I try to help everybody be positive and show them that though we may not have clean water right now, that doesn't mean that we're not human beings. We are strong people. We are fighting people, and regardless of everything holding us back, we can still be great by our own decisions. I'm always letting people know that they are in control of their own lives. I'm from Flint, Michigan and look at what my life is. I picked a career at the age of 11 and stuck to it. I've been through a lot. I want to let them know that if I can make it, they can make it, too.

As told to Kristin Magaldi, and edited for clarity.