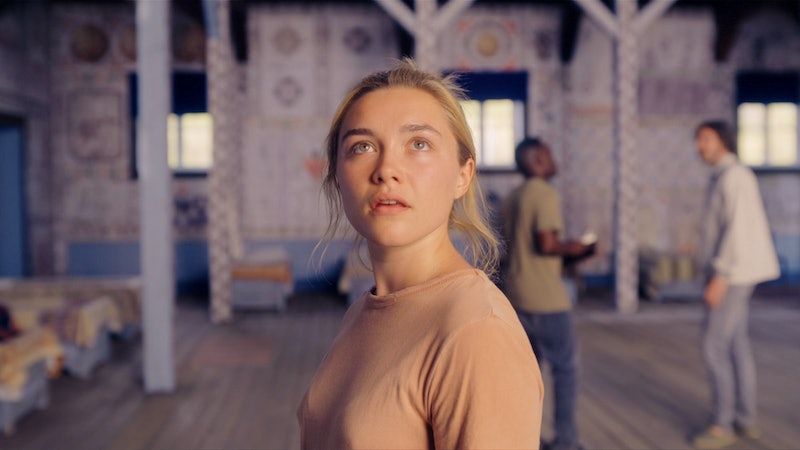 If you saw or even know the bare minimum about Hereditary, Ari Aster's 2018 horror feature, there's little chance that you'll go into his new movie Midsommar expecting a light, cheesy scare-fest. His previous film, about a grieving, fractured family and the dark force that hovers quietly over them, is thought-provoking yet still chilling, and Midsommar, his highly-anticipated folk-horror film lives up to the expectation its predecessor set. At the center of this one is Dani (Florence Pugh), a young, American woman grieving a nightmarish loss. Her trip to a remote Swedish commune exposes parts of her that she's struggling to keep buried. In that way, Midsommar taps into our fears about our own trauma and how we are — or aren't — dealing with it.

"Dani is walking on a tightrope of possibly falling into the worst emotional destruction," Pugh explains, when we meet in a Manhattan hotel. "Every single time she’s forced to look at herself or look at her pain, it’s like, 'Either I can stay up here and pretend as if nothing’s happened, or I will just fall.' And she’s never fallen yet." That all changes when she immerses herself in the Hårga people and their traditions.

To explicitly explain what Dani is dealing with when she arrives is to spoil one of the movie's most sickening turns. What's important to understand is that she is, as Pugh says, "totally raw, just on the edge." (When the group makes their first stop in Sweden and partakes in some mushrooms, Dani has a frightening trip that meaningfully comes to a head when she sees herself in a mirror.) But it's not just the tragic event itself that's eating at her. Dani appears to have no support system. She and her boyfriend Christian (Jack Reynor) are simply going through the motions; he seems to be uncomfortable with her pain at best, and resentful of it at worst.

In that way, Dani is something of an avatar for Aster, who channeled an awful breakup into the Midsommar script. Sitting across from me at A24's New York offices, he calls himself a "neurotic guy who’s always working through one crisis or another" and readily admits to casting the audience as his therapist.

"In any breakup, you’re typically mining the ruins of the relationship, and blaming yourself for certain things, and blaming the other person, and there’s just that post mortem period," he explains. While not directly inspired by that particular relationship, Midsommar was Aster's way of "writing [his] way through it."

For her part, Pugh didn't have to lean on the life experience that inspired the film to capture a young woman who's perpetually on the edge of a complete breakdown.

"Everything was in the script," the actor says. "That was a big, scary thing for me, because she’s so in pain, and she’s so desperately trying to run away from dealing with grief, that I had no idea how to get into that ...But discussing her mindset, where she was, how she thought, that was definitely interesting to go over with Ari. But at some point in a role, and Ari would agree, you have to let the person make it how they perceive it as well."

Still, the therapy theme was present through the rehearsal process as well, where Pugh and Reynor ("a good mate," she says) would improvise as Dani and Christian in front of Aster, who served as a mediator and observer. "And Jack said straight away, 'I just felt your weight. I just felt so guilty,'" Pugh recalls. "That's the heaviness of her."

That's what makes Midsommar so cathartic to watch at times, even though you may wish you could unsee some of it. The rituals of the Hårga, their relationship to nature, the way they prize empathy — all of it seems to break Dani open, piece by piece. So, by the final crescendo, when it all goes "batsh*t crazy," in Pugh's words, her character has reached a different emotional plane.

"Dani is not necessarily all there anymore. That was fun to figure out how I was going to do that and what level of gone is she, and how do I show that, and, also, what’s going to make her feel better by the end of this? Do I want her to be broken yet again, or is she going to be at peace?" Pugh says. "You can never really let go like that in an acting gig."

But as proud as she is of the film, Pugh maintains that the role was "exhausting," and that the entire shoot "a beast" for everyone involved. "I would have a Bloody Mary, and I’d have half a packet of Lindt chocolate," she says when I ask how she decompressed at the end each day. "And I’d just sit and wait until my face de-puffed and then I’d be like, 'OK, now I can listen to some jazz.'" Fortunately, she had a soft place to land after it was all over: going straight to work on Greta Gerwig's forthcoming Little Women adaptation, playing Amy March.

"I went on to playing the sassiest, cheekiest, funniest little bean, and that was perfect," Pugh says with a smile. "She was actually all the therapy I needed. I went from nearly emotionally dying every day to being this little brat that ate food all the time."

Despite what Dani endures and the serious themes at work, Midsommar is also surprisingly funny — as in literally laugh out loud funny, at times. Aster explains that almost everything he's written is dark comedy, Hereditary being the "most sober" of his projects. In Midommar, he found an "easy target" in Christian and his fellow grad student friends, representing "academia in general." While Dani is having this transformative experience driven by her grief, Christian and his buddies are poking fun at the Hårga and working out how they can exploit them to their own benefit.

"[There are] so many movies about kids being stuck somewhere and they can’t get out — why can’t they get out? — and I liked the idea of them not wanting to get out," Aster says of those characters, who battle over who gets to be the one to turn the ancient festival into an academic paper. "And the worse it got, the more exciting it was [for them] ... And, I mean, people competing over a thesis is funny."

So Midsommar, in its totality, is unlike any other horror movie you've ever seen — including its predecessor. As sarcastic as it sometimes is, Dani's journey may leave you feeling cleansed too.

More like this
At 28, Rosie Perez Risked Her Career To Stop Playing Stereotypes
By Gabrielle Bondi
'That '90s Show' Star Callie Haverda Got Advice From Mila Kunis & Ashton Kutcher
By Brad Witter
Twitter Is Mad At The Razzie Awards For Nominating A Child For Worst Actress
By Radhika Menon
Owen Thiele Asked Sundance Attendees About Films That Don’t Exist
By Grace Wehniainen
Get Even More From Bustle — Sign Up For The Newsletter
From hair trends to relationship advice, our daily newsletter has everything you need to sound like a person who’s on TikTok, even if you aren’t.