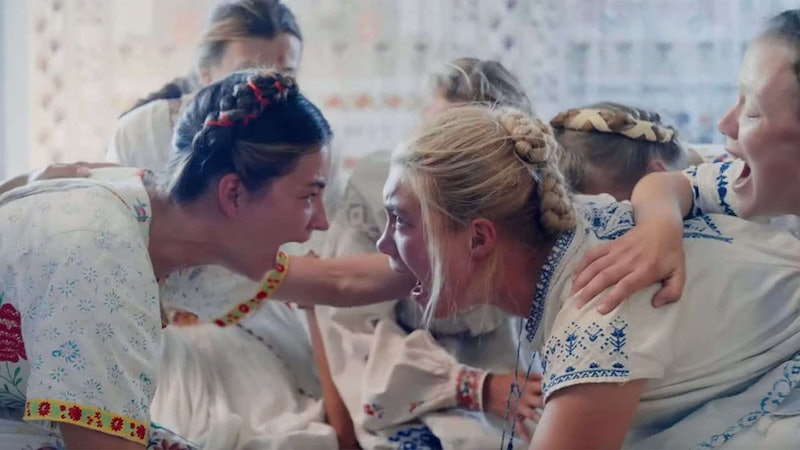 When things go sideways in your romantic relationship, and you have to choose between taking a trip to reconnect and couples therapy, choose the therapy. Especially when it's free. A24, the studio that distributed the nightmare breakup movie Midsommar, is partnering with Talkspace to offer free couples therapy, The Cut reported. Perhaps this is to apologize for prompting couples experiencing relationship hiccups to rethink ever taking a trip together again.

If you're not in the know about the horror movie Midsommar, Wikipedia describes the plot in sufficiently disturbing detail. I won't spoil it for you, but the quick and dirty is that an American couple — who probably should have called it quits already — decide to travel to Sweden to attend a midsummer celebration at a commune. The commune turns out to be a death cult, and everyone is taking psychedelic drugs and participating in human sacrifice rituals. Spoiler alert — it turns out that this is not the best way to repair a broken relationship.

Instead, the couple probably should have opted for therapy. If your relationship could use a tune up, you can enter to win three months of couples therapy from Talkspace by commenting on the video on @MidsommarMovie's Instagram, Twitter, or Facebook and tagging a friend or significant other.

Couples therapy from Talkspace, a virtual counseling service, normally costs $99 a week. If that's too pricey for you and your BAE, then you're definitely going to want to enter this contest.

It's no secret that communication is key to any successful relationship, romantic or otherwise. And maybe if the couple in Midsommar had gone to couples therapy and learned some communication skills, they wouldn't have ended up spending their summer vacation with a cult that wears human and animal skin suits.

But does couples therapy actually work? According to Dr. Dianne Grande, Ph.D., writing for Psychology Today, the answer is yes. "The good news is that couples counseling as it is currently practiced — using emotionally focused therapy (EFT) — is now roughly 75% effective, according to the American Psychological Association," Dr. Grande noted.

Emotionally focused therapy focuses on attachment and bonding. "The therapist and clients look at patterns in the relationship and take steps to create a more secure bond and develop more trust to move the relationship in a healthier, more positive direction," Psychology Today reported.

If you're not sure whether or not it's time to seek couples therapy, the American Psychological Association lists some signs. One major sign that you and your partner may not be able to resolve your issues on your own is having the same fight over and over again. However, they also noted that you don't have to wait until your relationship is rocky to seek help. A lot of couples go to therapy proactively to learn effective communication skills. This includes knowing how to argue constructively versus destructively.

"Couples that use destructive behavior during arguments — such as yelling, resorting to personal criticisms or withdrawing from the discussion — are more likely to break up than are couples that fight constructively. Examples of constructive strategies for resolving disagreements include attempting to find out exactly what your partner is feeling, listening to his or her point of view and trying to make him or her laugh," the APA noted.

If you're ready to learn some of these skills, think about entering this contest to win free couples therapy from Talkspace. Even if you and your partner are in a good place, it's probably better than turning to a commune to solve your problems.