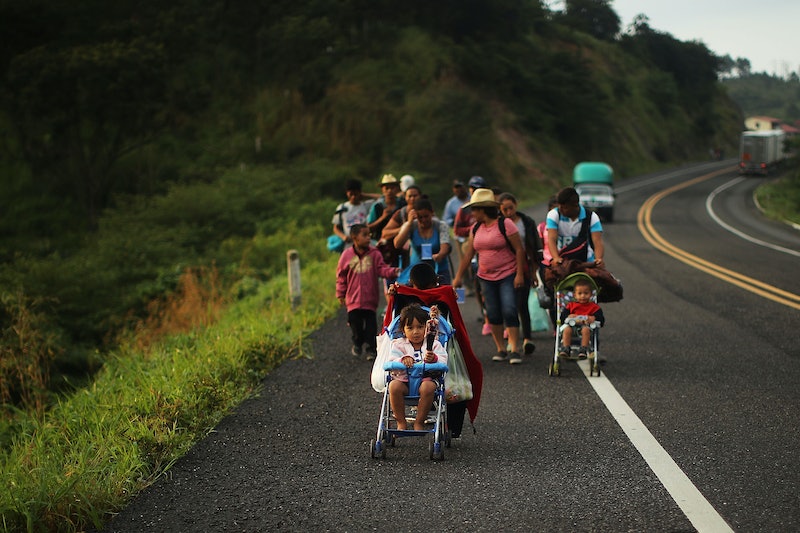 On Thursday in U.S. District Court in Washington, D.C., 12 Honduran migrants traveling toward U.S. sued President Donald Trump and Attorney General Jeff Sessions as well as leaders of Immigration and Customs Enforcement and the Department of Homeland Security, alleging that the administration is in violation of their due process rights as guaranteed by the Fifth Amendment. The class-action lawsuit, which was filed by parents and on behalf of their children, called Trump's "professed and enacted policy" toward the group of migrants slowly making their way toward the U.S. through Mexico to seek asylum as "shockingly unconstitutional." Bustle has reached out to the White House for comment.

The suit contends that Trump and his administration are abusing their constitutional rights. "President Trump continues to abuse the law, including constitutional rights, to deter Central Americans from exercising their lawful right to seek asylum in the United States, and the fact that innocent children are involved matters none to President Trump," according to the suit. Read the entire filing here.

The filing also mentioned Trump's plan to deploy 5,200 active-duty military troops to the southern border. USA Today reported that roughly 2,100 National Guard members were already deployed to the border this year by Trump.

"The legal problem with Trump's plan to stop caravan persons from entering this country is that Plaintiffs are seeking asylum, and Trump simply cannot stop them from legally doing so by using military, or anyone," according to the suit.

News of the slow-moving group of migrants — which began in Honduras — has dominated headlines recently. A study by left-leaning watchdog organization Media Matters found that mainstream outlets are flooding the market with stories about the caravan, which has since slowed as members started moving through Mexico on foot. Media Matters found that The New York Times and The Washington Post have written 115 stories about the caravan.

While coverage of the caravan continued to dominate headlines and newscasts, Trump tweeted on Oct. 18 that the caravan contains "MANY CRIMINALS" but has not produced evidence to support his claims. The lawsuit has seized on this.

"President Trump has begun hysterically asserting without any evidence that 'many criminals' and 'many gang members' are in this 'onslaught' of migration. In an effort to create fear and hysteria, Trump has gone so far as to call this 'an invasion of our Country,'" the plaintiffs' write, according to the lawsuit. "Despite these statements and actions, Trump has been unable to produce any evidence of criminals and gang members within the caravan, which has largely proceeded peacefully on its journey."

Mike Donovan, the president of Nexus Derechos Humanos (the law firm that filed the suit), told The Daily Beast that the Trump administration has violated asylum seekers' rights. "The President is violating federal law, trampling the rights of Americans and legal immigrants to be free from use of the military for law enforcement, and has set up a potential catastrophe at the US/Mexico border all in the name of white nationalism and with the objective of scoring political points," Donovan said in a statement.

On Friday, Trump said he expects "next week" to sign an executive order to curb rules of who can seek asylum, largely seen as targeting those in the caravan. It remains to be seen how this lawsuit will effect Trump's potentially coming executive order.