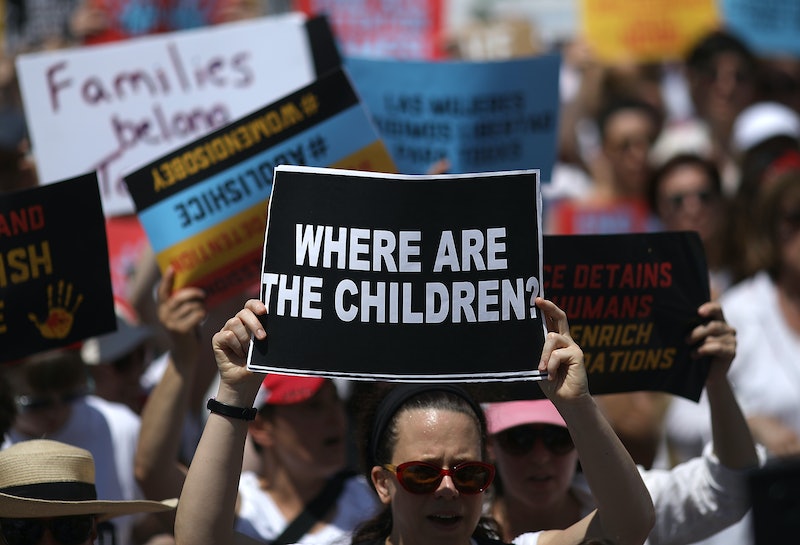 According to a new report from the Associated Press, migrant children are being detained in "inhumane" conditions at a Texas border facility. Lawyers who visited the detention center say that over a dozen children they met had the flu, and that the children there were being denied adequate food, medical attention, and showers.

“In my 22 years of doing visits with children in detention I have never heard of this level of inhumanity,” Holly Cooper, an attorney who represents detained minors, told the Associated Press. “Seeing our country at this crucible moment where we have forsaken children and failed to see them as human is hopefully a wake up for this country to move toward change.”

Bustle has reached out to Customs and Border Protection for comment. The Associated Press reported that acting Customs and Border Protection Commissioner John Sanders said that medical care should be improved for children in such facilities. He added that though Border Patrol is currently holding 15,000 people, capacity is actually 4,000 people, and called on Congress to pass a funding package to help with the costs.

According to the Associated Press, children at the detention center told lawyers that they'd been given uncooked frozen food to eat, and had gone weeks without being given the opportunity to bathe or change clothes. The lawyers also said that they encountered a 2-year-old boy at the detention center who was sick. He had mucus on his shirt, was wearing no diaper, and had wet his pants; however, no officials were reportedly attending to him, and so three girls aged 10 to 15, who had also been detained, were taking turns caring for him.

The lawyers visited the facility in Clint, a desert scrubland around 25 miles from El Paso, as part of a legal investigation regarding the Flores Settlement, which places limits on the detention of minors and requires them to be housed in "safe and sanitary" conditions. Legally, Customs and Border Protection can only detain minors for 72 hours before releasing them to the Department of Health and Human Services; however, many children told the lawyers that they'd been held by CBP for more than 72 hours.

On Tuesday, Rep. Alexandria Ocasio-Cortez referred to the detention centers on the U.S.-Mexico border as "concentration camps." Some criticized her for this, arguing that she was making an improper comparison between America and Nazi Germany. In response, Ocasio-Cortez noted that concentration camps are not the same as death camps, that she never referred to Nazi Germany or death camps in her comments, and that several Jewish historians have said that the comparison is accurate.

Although the conditions in which migrant children are being detained has prompted widespread outrage, the Trump administration defended its detention centers in court on Thursday, Newsweek reports. At the 9th Circuit Court in San Francisco, a Justice Department lawyer said that denying migrant children soap and toothbrushes, and requiring them to sleep on concrete floors in cold and crowded rooms, still qualifies as "safe and sanitary" treatment. This prompted incredulity from several judges at the hearing, according to Newsweek.

"Are you arguing seriously that you do not read the [Flores] agreement as requiring you to do anything other than what I just described: cold all night long, lights on all night long, sleeping on concrete and you've got an aluminum foil blanket?" U.S. Circuit Judge William Fletcher asked. "I find that inconceivable that the government would say that that is safe and sanitary."