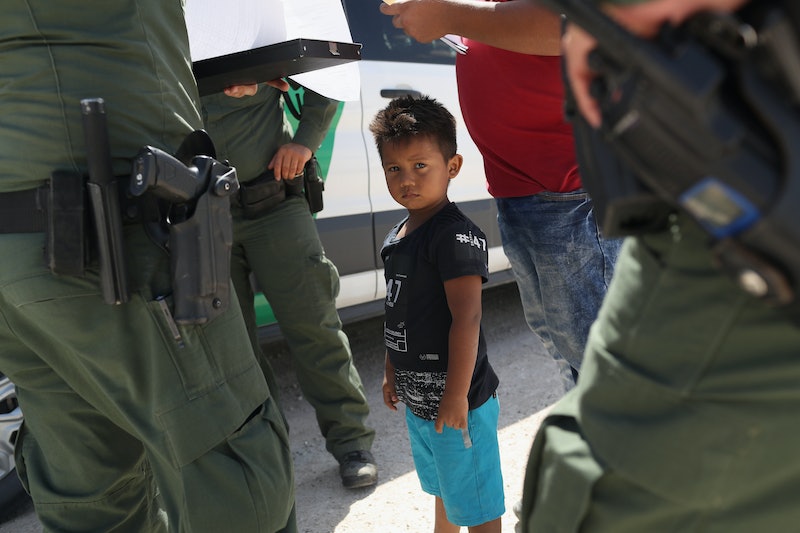 President Donald Trump's executive order billed as stopping family separation at the border seems not to be bringing much relief to those affected. According to The Washington Post, migrant children recite the Pledge of Allegiance in English as a way to show "respect" for the country that has separated them from their mothers and fathers. Bustle has reached out to Southwest Key Programs for comment.

According to The Post, the practice has been taking place at a detention center in Brownsville, Texas, that was previously a Walmart, where children have yet to be reunited with their parents. Detained immigrant children have reportedly asked the staff of the center why they must recite the pledge and have been told, "It’s out of respect," the newspaper reported. One staffer who told The Post that the practice is enforced to drill a sense of respect into the children asked to remain anonymous, as they feared that revealing this information would cost them their job.

On Twitter, observers condemned the practice, while others noted that this isn't the first example of such forced patriotism. In the 1940s, citizens and non-citizens of Japanese ancestry were forced to live in internment camps, while young Japanese children were forced to recite the Pledge of Allegiance.

The language barrier makes it an even more peculiar situation. Many of the immigrant children, a majority originally from Central America, are not fluent in English. So, they may not even know what the words mean. It's a practice that the University of Pennsylvania's computer and information science professor Matt Blaze called an instance of "calculated sadism."

A former worker for the facility, run by Southwest Key Programs, recently spoke out against the center, citing the apparent emotional stress on detained children. The former employee, Antar Davidson, told the newspaper, "People were yelling at the kids all the time" in Spanish. According to Davidson, the supplies in the center were so low on stock that children had to be given "hair gel one spoonful at a time."

It's not so different in another detention center in Texas. In a McAllen detention facility, immigrant parents have been united with their children but the fear of losing them one more time looms large. There have been reports of parents wrapping their legs around their young ones so they cannot be taken away by immigration officers.

The children's reactions to being separated from their parents range from hopeful to heartbreaking. According to an employee that spoke with The Post, "Some say, 'I'm going to be the most famous singer,' and others say, 'I'm going to be a soccer star.'" But others have more sobering thoughts: An older child told The Post, "Remember that we don't have papers. We'll probably work in construction."

Observers across the country have condemned the detention center. Its neighbors, too, have spoken out. In one case, a person who lives near the Walmart-turned-detention center shared her opinion with the newspaper. The mother, named Liliana Barajas, was steadfast in her criticism to The Post, "As a mother, I don’t like it. They don’t bring them out enough. They’re kids. The last thing you want is for them to feel what they are in. It’s like a home prison to them. It’s heartbreaking."