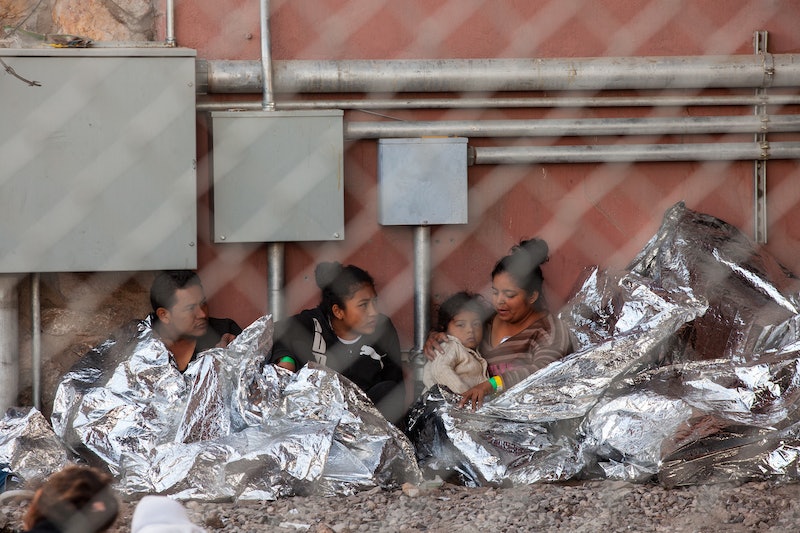 Migrants entering the United States near El Paso, Texas, have been temporarily held underneath a bridge to Mexico starting last week — some sleeping outside with nothing more than thermal blankets, BuzzFeed News reported. The Trump administration says that the temporary migrant holding facility under the bridge is necessary given a recent surge in migrants arriving at the southern border. Bustle has reached out to Customs and Border Patrol (CBP) for comment.

According to The Texas Tribune's interview with Ramiro Cordero, a CBP spokesperson for the El Paso sector, the border stations there don't have enough space to house arrivals before they're handed off to Immigration and Customs Enforcement or released with papers to appear before an immigration judge. He estimated that migrants would spend about 12 hours in the temporary holding area before moving on.

There's reportedly a military-style tent in the fenced-in area, and Cordero said there is space for everyone in it — and that it's "perspective" that is causing some migrants to claim they've been there multiple days. "The sun went down, it came back up," Cordero said. "So for them that’s two days."

He also said there's food. "They get blankets, food, bathroom facilities, water, snacks — they have it all there," Cordero added.

Andrew Meehan, CBP's assistant commissioner for public affairs, told BuzzFeed in a statement that permanent facilities are not sufficient for the numbers of arrivals they're seeing. "CBP’s facilities and manpower cannot support this dramatic increase in apprehensions of family units and unaccompanied children," Meehan said in the statement. "USBP temporary holding facilities were simply not designed to process and care for a population of this size and of this demographic."

The New York Times reported that the main border processing center in El Paso was at 400 percent capacity. Department of Homeland Security (DHS) Secretary Kirstjen Nielsen said the "system is in free-fall" in a statement on Friday. "DHS is doing everything possible to respond to a growing humanitarian catastrophe while also securing our borders, but we have reached peak capacity and are now forced to pull from other missions to respond to the emergency," Nielsen's statement read.

President Trump has responded by threatening Mexico and Central American countries for not doing more, and on Saturday, the State Department confirmed to USA Today that it was cutting off all foreign aid to Guatemala, El Salvador, and Honduras following the president's direction.

Trump has also threatened to close the border with Mexico — or parts of it — if the number of migrants does not decrease. "I must, in the strongest of terms, ask Mexico to stop this onslaught — and if unable to do so I will call up the U.S. Military and CLOSE OUR SOUTHERN BORDER!" Trump tweeted.

Mexico has offered humanitarian visas to migrants passing through the country so they can stay and work, and it has promised billions of dollars in investment in its southernmost states and neighboring Central American countries.