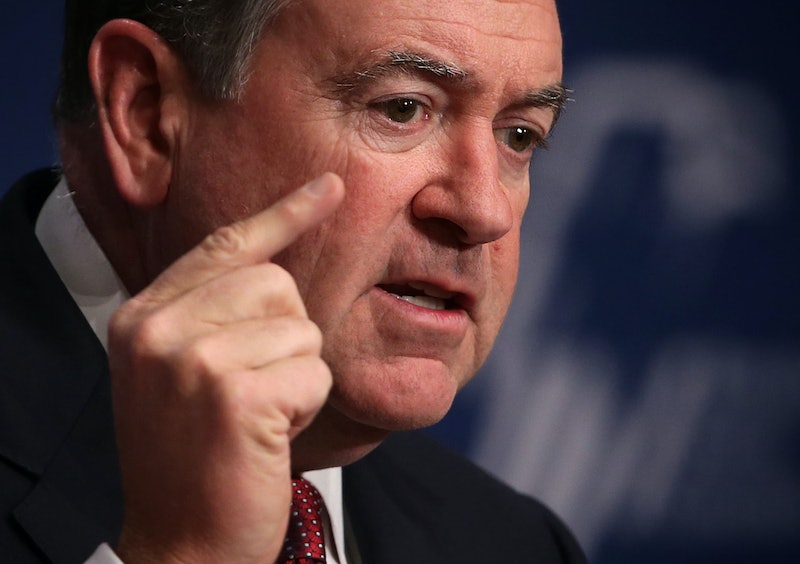 Saturday Night Live is under heat from conservatives after it introduced its rendition of Deputy White House Press Secretary Sarah Huckabee Sanders played by Aidy Bryant last weekend. The biggest critic of SNL's version of Sanders appears to be her own father, Mike Huckabee, who called the parody "sexist" and "silly" on Fox Business.

Huckabee said, "I thought it was a little bit silly, sexist, [and] misogynist, but my daughter is certainly capable of handling a whole lot worse than that." He went on to say, "The fact is it does not take away in any way who she really is" and that "she is a great wife and an absolutely wonderful mother to three beautiful preschool children and she is a generous and thoughtful person."

The SNL parody arrived after a fairly stressful week for White House Press Secretary Sean Spicer, who had to defend a range of overwhelming developments last week. The press secretary had to field inquiries about former National Security Adviser Michael Flynn and former Acting Attorney General Sally Yates, plus he had to announce the sudden and shocking dismissal of former FBI Director James Comey. To top all of that, there were rumors that Trump was unhappy with Spicer's performance. The SNL parody touched on Spicer's agony by introducing Sanders in place of him for that segment.

Lampooning a woman's appearance to make a comical point is lazy comedy. But that is not what SNL's parody does. In fact, Sanders' character is shown to be more competent and better-liked than Spicer's character (played by Melissa McCarthy). In the skit, Spicer is seen hiding in the bushes and later on roaming the streets of New York City on a mobile podium. The parody is a commentary on Sanders, who is shown as peremptory and unbothered by decorum while she eats an apple in front of the press. It's not a commentary on physical attributes but rather personality. If Huckabee can't see the comedy in a lighthearted joke like that, maybe he should explore more of SNL's parodies, which often focus on political figures' idiosyncrasies.

It's also a little rich that the criticism is coming from Huckabee, who is no master of comedy himself. For context, let's remember that this is the same man who made a contrived, racially-tinged quip on Cinco de Mayo, then cracked a weak joke about CNN, inadvertently showing that he doesn't know how acronyms work.

Most importantly, Huckabee's accusation that the SNL parody is "misogynist" is probably the first time he's ever used the term to describe anything. It's an ironic opprobrium coming from a man who made a sexist joke about his own wife while trying to ridicule the chair of the Federal Reserve System, Janet Yellen. For the record, Huckabee has also indirectly called Beyoncé a "stripper." On a more sobering front, he's is the same Republican who admitted that he would not strike out the option of sending federal troops to end abortions. For someone concerned about SNL's "misogynist" humor, Huckabee's own statements on a woman's right to reproductive health care is less than stellar.

People will always have differences over what is humorous and what is not, including outspoken people like Huckabee. But before trying to appoint oneself as a connoisseur of comedy, a little self-reflection about one's own humor might just help the Arkansas Republican.

More like this
23 Abortion Funds In States With Trigger Bans To Donate To
By Emma Carey
Lydia Leonard Is Setting The Record Straight
By Olivia-Anne Cleary
Watch Benedict Cumberbatch Lead An ‘SNL’ Medieval History Lesson On Roe v. Wade
By Grace Wehniainen
Michigan’s Governor Is “Going To Fight Like Hell” To Protect Abortion Access
By Andrea Zelinski
Get Even More From Bustle — Sign Up For The Newsletter