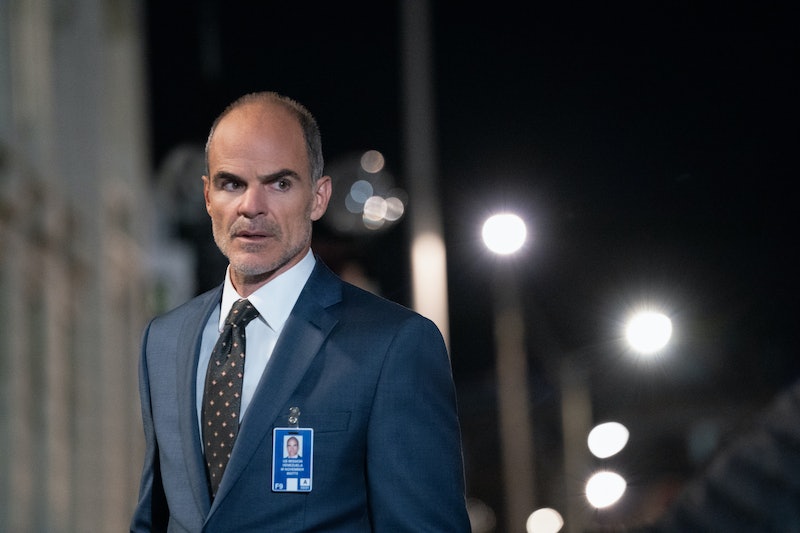 House of Cards' fan favorite Doug Stamper is back on TV — or, at least, the actor behind him is. Michael Kelly plays Mike November on Jack Ryan, and though the role is similar to many he's had throughout his career, it came with a unique opportunity as well... the chance to have a little light fun. That's something Doug really didn't get on HoC.

"Mike November is a by-the-rules, very much by-the-book kind of guy," Kelly told Deadline of his CIA field officer character in Season 2. "But Jack convinces him otherwise ... And although he's by-the-book, I was able to go and explore a slightly lighter side to this guy."

In Season 2, Mike joins John Krasinski's Jack Ryan on their quest to take down a dangerous political figure in South America. Kelly told Deadline that he loves taking on projects that let him work with and learn from other talented actors. He'd worked with Krasinski's wife Emily Blunt before on the film The Adjustment Bureau, and he said at New York Comic Con that he jumped at the chance to then work with Krasinski on Jack Ryan. "They called about this job and sent me the pilot of the first season, and I watched the pilot and was like, 'Oh my god, yeah, totally. I'm totally in,'" Kelly said at NYCC, according to Men's Health.

Kelly plays a lot of the same type of character — usually some sort of CIA or FBI agent. For example, he played CIA operative Mark Snow in Person of Interest, Special Agent Jonathan Sims in Criminal Minds: Suspect Behavior, and Agent Ron Goddard on The Sopranos. You'd think playing the same types of roles over and over again would get old, but Kelly told Deadline that he uses all these characters as ways to learn from his fellow actors and find unique ways to play similar people. He spoke fondly to Deadline of his time on The Sopranos with James Gandolfini. "To have watched him play that character — to learn from him how he did that — that was invaluable and something I will take to my grave as one of the most special experiences I've had in my career," Kelly said.

Looking forward, Kelly may not reprise his Mike November character in the third season of Jack Ryan, which is already in the works, per Den of Geek. Kelly told Deadline that he was originally only asked to complete a one-season arc. "They said, 'You have this offer to go and join the cast of Jack Ryan for one season — a one-season deal,'" Kelly specified. But TV casting changes all the time, so perhaps his character arc will extend into future episodes.

In the meantime, Kelly is in the pre-production stages of his next project based on FBI director James Comey's book A Higher Loyalty. And, again, Kelly will play a person with an FBI background. On the show, he's Andrew McCabe, an attorney and former Deputy Director of the FBI and FBI special agent. But while he may be familiar with the role to an extent, you can bet that Kelly will use the experience as a way to keep learning about and furthering his craft –no matter how many agents he plays.

More like this
Michael B. Jordan Tackled His "Public Breakup" With Lori Harvey On 'SNL'
By Brad Witter
Watch Kelly Clarkson Sing A Taylor Swift Breakup Song About A Toxic Relationship
By Alyssa Lapid
'The Queen’s Gambit' Season 2 Tweet Wasn’t From Anya Taylor-Joy
By Mary Kate McGrath, Jack Irvin and Grace Wehniainen
Ashton Kutcher Wants Danny Masterson “To Be Found Innocent” In Rape Retrial
By Jake Viswanath
Get Even More From Bustle — Sign Up For The Newsletter
From hair trends to relationship advice, our daily newsletter has everything you need to sound like a person who’s on TikTok, even if you aren’t.