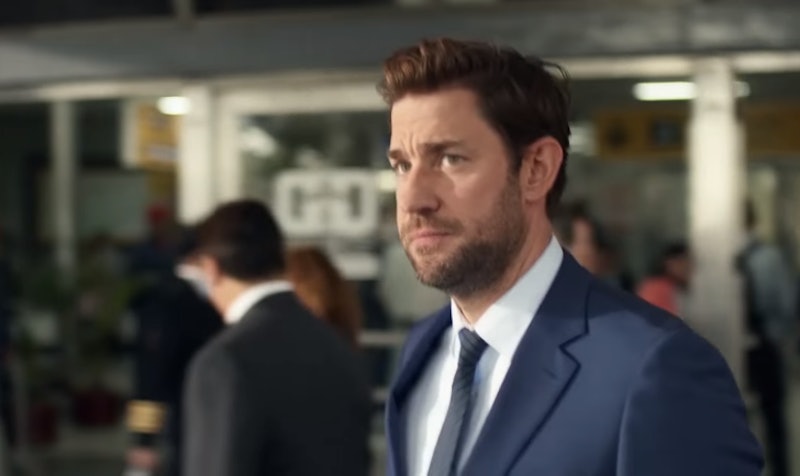 Season 1 of Amazon's Jack Ryan is largely based in the Middle East, but was shot in a variety of locations around the world including Morocco, Washington D.C., Paris, and other international locations. Jack Ryan Season 2 was filmed in multiple locations as well, but mostly in Bogota, Colombia, per USA Today. The South American city poses as a city in Venezuela, according to the show's official description, where Jack is led to investigate a potentially suspicious illegal arms sale and uncovers something much more arduous.

The crew headed to Colombia in July 2018, per Variety, right before Season 1 released on August 31, 2018. According to Amazon, in Season 2, Jack's investigation takes him and his fellow CIA operatives on a global mission that includes stops in Russia, the United Kingdom, and the United States.

According to the Daily Mail, Krasinski and Season 2 newcomer Noomi Rapace were spotted filming a dramatic scene on a London street in October 2018. As co-show runner Graham Roland said at the 2018 San Diego Comic-Con, they "had to actually go to the places," and "couldn't cheat the audience" while filming Season 1. Chances are, they followed that same mission statement while producing Season 2. According to Variety, filming was slated to take five months.

A casting call from Project Casting was posted in November 2018 in search of talent based in San Diego, California for scenes allegedly filmed there. Filming has also been rumored to have taken place in New York City and Washington D.C., but that has yet to be confirmed by an official source.

As reported by Bustle writer Rebecca Patton, Season 1 was filmed in Maryland, Virginia, Washington D.C., Morocco, and Paris. And according to a Reddit Ask Me Anything conducted by show runners Roland and Carlton Cuse, Season 2 filming spanned six cities on three continents: North America, South America, and Europe.

"The scope of the show was really big for a TV show," they wrote to one fan. "We were filming in 6 different cities on 3 continents and we could not afford multiple trips. So we had to write all 8 episodes ahead of shooting and then cross-board them, so on any given day we might be shooting parts of any of the 8 episodes, which is challenging."

But they were fortunate enough to be given the resources by Amazon to take on such an extravagant filming schedule. "Amazon gave us the time and resources  to tell our story on a movie scale and make the show the way [co-writer] Graham Roland and I wanted to make it," Cuse told The Hollywood Reporter in August 2018.

Now that Cuse has officially stepped down as show runner for Season 3, things could change. Hopefully, for the sake of future seasons, their generous filming resources don't.

More like this
Yes, 'The Price Of Glee' Is Available To Watch In The UK
By Catharina Cheung
At 28, Rosie Perez Risked Her Career To Stop Playing Stereotypes
By Gabrielle Bondi
Here’s Everything Coming To & Leaving Netflix In February
By Jake Viswanath
Adam Ali Hopes 'Waterloo Road' Will “Subvert” Queer Misconceptions
By Sam Ramsden
Get Even More From Bustle — Sign Up For The Newsletter
From hair trends to relationship advice, our daily newsletter has everything you need to sound like a person who’s on TikTok, even if you aren’t.